Rock band Traffic Jam is a big name on the festival circuit. They share their musical journey and lofty mindset. 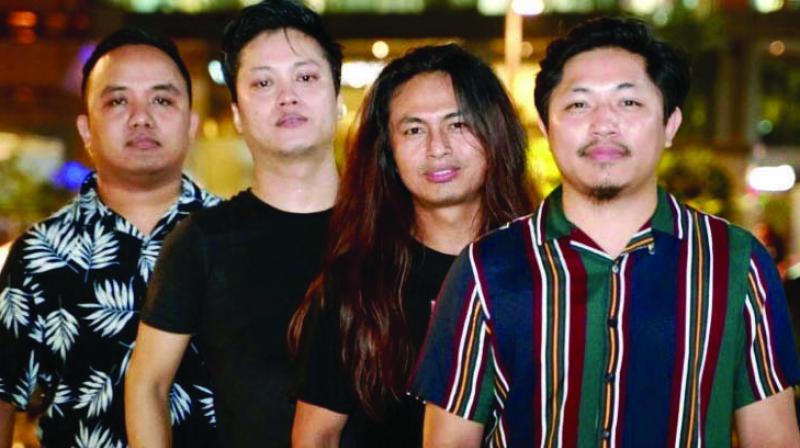 Traffic Jam is a Delhi-based rock band with all its members hailing from the Northeastern states of India; people who have lived in similar circumstances and met up far from home in the capital city. The band is inspired by the great anthems of rock that resonate within the hearts of their people and pays tribute to the rock gods through their music and composition.

The group was formed in 2011 by the band’s lead singer and lead guitarist, Jimmy Thang, who has an extraordinary range of vocal abilities and brilliant guitar-playing skills. Jimmy has been on a great musical journey. Being from Manipur, Thang has always been surrounded by a strong musical culture, particularly from the church choirs. He grew up singing in a lot of these church groups. He says, “My hometown has always worshipped music and it has always been a big part of the traditions. Aside from all this, my father is also a musician and a keyboard player.”

Thang adds, “I inherited my love for music from my father but I only realised how strong it was as I grew older.” Soon enough, it became his dream to be able to play music as a career and after completing his college from Delhi University, Thang finally decided that he wanted to learn and pursue music full time. That was when he came up with Traffic Jam.

Other than Jimmy, the band features Kima Khiangte, who is the bassist, guitarist and composer. Their drummer Mike Ji is a seasoned musician with more than 10 years of experience. And last but not the least, they have the highly versatile keyboardist, Albert Peka.

The members of Traffic Jam have kept themselves busy in the studio and with private gigs in many pubs across the Delhi-NCR region such as Saints N Sinners. Traffic Jam has also been an energetic headliner for a popular music festival in the country, the North East Festival. It has also played at the famous Mizoram Music Festival in 2017, the same year when the band participated in one of the biggest concerts of Manipur, called the Citywide concert held in Churachandpur.  The music video for their single Here I Stand was dedicated to the world champion boxer Mary Kom. In 2019, Traffic Jam was shortlisted as one of the headlining acts for the Udaipur World Music Festival along with many famous performers from all over the world.

Speaking about their musical moorings, Jimmy says, “We have always been inspired by many great artists such as GnR, Dream Theater, Iron Maiden, Metallica, Deep Purple, White Lion, Whitesnake, Extreme, Led Zeppelin, Pink Floyd, Queen, AC/DC, etc… the list goes on and on.” Jimmy believes that he is “a lifetime student of music” and the process of learning will never stop. He hopes that the same is true for Traffic Jam as they steadily march together towards a bright future.