It was an eye opener to see the magic undiminished at the opening of the Spic Macay Annual Convention at Jawaharlal Nehru University last week. 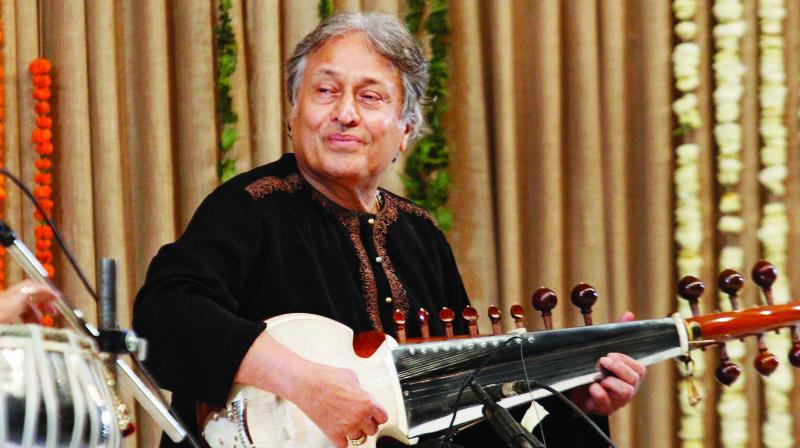 Instrumental musicians dominated the world of North Indian classical music from the1960s to the 1980s. This golden era saw such giants as Ustad Vilayat Khan, Ustad Ali Akbar Khan, Pandit Ravi Shankar, Ustad Amjad Ali Khan and Pandit Nikhil Bannerji. Ustad Amjad Ali Khan, the youngest of them all, is today often called the “last of the great Ustads” for this reason. The subsequent prominence of greats like Pandit Hari Prasad Chaurasia and Pandit Shiv Kumar Sharma could not capture that golden era of instrumental music.

Ustad Amjad Ali Khan was also the first “rock star” of Indian music — in India. Way before Ustad Zakir Hussain came on the scene to win hearts, Ustad Amjad Ali Khan, with his movie star looks, chiselled profile and dapper dressing (he was famous for arriving to hear concerts in midnight blue velvet suits) was regularly mobbed wherever he went. His mesmerising presence on stage, perfect posture, the elegance with which his hands held his instrument all added to his charm. In the words of a young fan, “He looks like an emperor holding court”. His undeniable talent with his “saaz” of course kept his fans glued to their seats.

It was an eye opener to see the magic undiminished at the opening of the Spic Macay Annual Convention at Jawaharlal Nehru University last week. His electric presence on stage; flanked by tabla accompanyists young enough to be his sons was as much a visual treat as an aural one. The audience was predominantly young — more than 1,000 students from all parts of India were attending the convention. The conventional clapping gave way soon to whistles and catcalls, as the youngsters could not contain their delight at his music.

The maestro started with raga Shudha Kalyan, but perhaps because of the delayed timing of his concert (he was to have started at 6.45 pm) after a brief “auchar” and “jor”, switched to a composition in the later evening — raga Maru Bihag — more appropriate for the time. His crystal clear enunciation of strokes, the “wazan” (weight) of his right hand, despite his age (he has now been playing for more than 60 years in concert) remains unmatched, though assiduously emulated by all. With Khan sahib (though he was the first on his instrument in our times to achieve the speed he did), the appeal of his playing has never been speed — it’s the perfection of execution that stuns, and continues to stun.

The next raga was Darbari Kanhra. As the Ustad explained, his musical forbear Tansen had modified the Kanhra of his time into Darbari Kanhra. (It was called Darbari as he played it in Emperor Akbar’s “darbar”). Who better than Ustad Amjad Ali Khan has the right to play Darbari! He has received direct training from the lineages of Tansen’s son as well as daughter. In this sense, Ustad Amjad Ali Khan truly represents the fullness of Tansen’s musical legacy. (Father Ustad Hafiz Ali Khan had trained under his father who trained under Tansen’s male descendants, Ustads Pyar Khan and Jaffar Khan. Later, Ustad Hafiz Ali Khan had also trained under Ustad Wazir Khan of Tansen’s daughter’s line).

Darbari is a complex raga that can veer into other ragas if it is not handled by a master — Ustad Amjad Ali Khan recounted the now well known story of his father imploring the then President Dr Rajendra Prasad to safeguard the purity of Darbari Kanhra, as he was concerned at the liberties musicians were taking in its interpretation! This was one of the reasons why in their family, Darbari is never prolonged; so that the temptation while expanding its contours don’t lead to misuse of its notes.

Ustad Amjad Ali Khan, of course handled the raga as the master he is — with deliberation and finesse, without light (“halka”) touches. All of his four compositions were traditional — one was his own creation. The sombre grandeur of Darbari Kanhra is unique — lesser musicians strive to achieve this by over use of the “gandhar”, which instead of conveying grandeur conveys a somewhat whiny plaintiveness which is not great Darbari. Ustad Amjad Ali Khan treats the notes of the raga as they deserve — with authority and a conviction born of correct training. He does not need to coax the mood — the mood is set by his sure touch.

The Ustad ended his recital with a depiction of the folk side of raga Durga, including snatches of Punjabi folk songs (“Aider kanakaan, odar bhi kanakaan”), Bihu of Assam, Tagore’s famous “Ekla chalo re”, a six-and-a-half beat composition in a more formal Durga, before ending in a crescendo of “taans” from different ragas in a spectacular exhibition of Ragamala. On the tabla were Mithilesh Jha and Shailendra Mishra, in the tradition the maestro has always maintained throughout his career of giving younger accompanyists a chance.

This was indeed “vintage Amjad Ali” — proof, if proof were needed, that he remains the king!