Watching some of the best international and local bands performing, I pondered about starting a band. 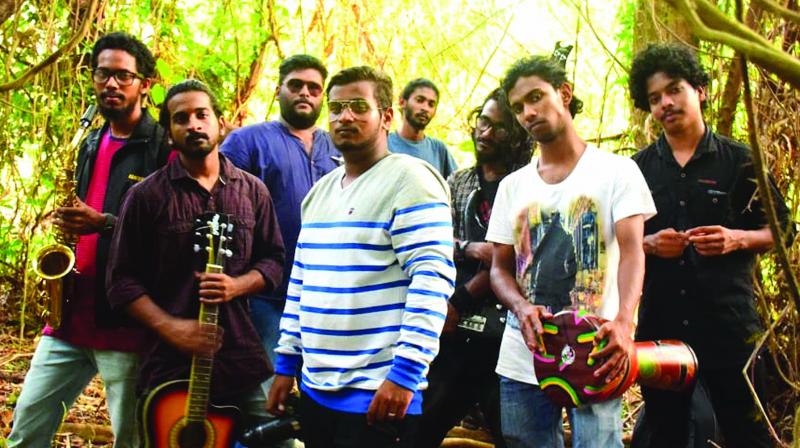 Noodlez is making waves with their zany music, which has elements of folk rock, classical and instrumental music.

Kerala-based band Noodlez is probably the coolest folk-rock band you will ever see. In the six years that they’ve been performing in cities across the southern part of the country, they have had housefulls every time. Noodlez’s co-founder and noted percussionist Abhijithson says that the band runs on the philosophy of friendship and happiness.  “As a student, I was into music and was driven by art. Watching some of the best international and local bands performing, I pondered about starting a band. At that time, I was already part of a college band which were doing small gigs. After completing engineering, I focused on music and was fortunate enough to find a few friends in the same wavelength. Thus we started the Noodlez.”

Their music is unique and fresh attracting fans of alternative and folk rock. Their gruff, raw, powerful vocals combined with simple and direct Malayalam folk-influenced instrumentation (plus those undeniable accents) will certainly pump up any hardcore fan. But, Abhijith aka Abhi reveals that they had to rely on cover songs in the beginning. “Like all other budding rock bands, we made covers and produced different renditions of hit Indian songs. Later on, Abhishek Santhosh who had been heading the band with me since inception decided to work on originals. The band has been influenced by the likes of Lamb of God – the American heavy metal band from Richmond, and Avial, the Indian alternative rock band that is also from Kerala. So, obviously our compositions have been a reflection of these inspirations.”

Lyrics and undeniably tight instrumentation helped them produce one of the best hits in recent folk rock history – Luttappi. “It was our reaction to certain social issues and we mixed it with a popular character in a Malayalam comic series. Luttappi has been one of our biggest hits and it also won us our first music festival award which was held a few months back in Bengaluru.  Then came Kunnu, portrayal of real-life struggles, and then Kali, the display of social animosity,” says Abhi.

He adds that success did not happen overnight. “Our journey was not a cake walk. When we started out, we struggled financially and didn’t even have a good platform where we could showcase our talent.

The indie music industry in our part of the world is blessed with some raw talents but unlike other industries like in the West, people have not accepted indie music artiste and they are still not given the credit they deserve. The release of our first video album was a great moment.

I still cherish those days of struggle that we had to undergo to fulfill the dream of releasing an album,” shares Abhi. He loves to still call the band a fresher in the industry and likes to dream big. “Recently, Thaikkudam Bridge was selected to perform at Summerfest, – the biggest music festival in the world.

That means our music industry is changing and we hope to reach that level one day,” he wraps up.