Kochi-based band Thakara is all set to release four new songs in April, each of which has a special message to portray. 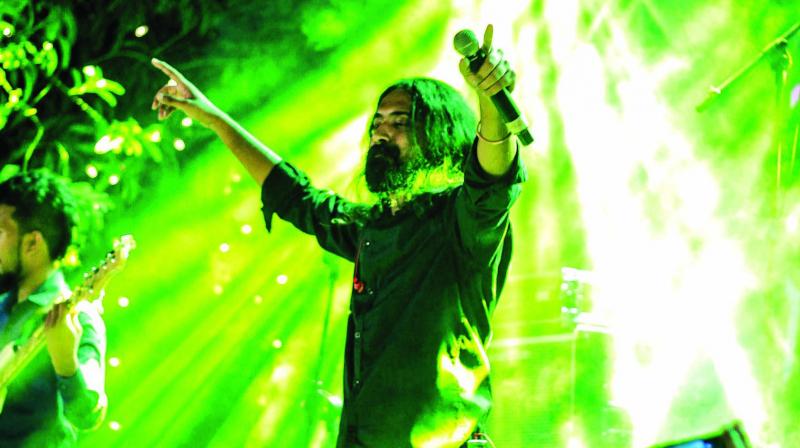 What started as a fun project for this Kochi-based band has now gained the status of being part of the big wigs in the music industry. The band was started in 2012 by James Thakara, “Thakara” which means a small sapling is a band that comes out with original songs that focuson various things that happen around us. They are all geared up to release four new songs in April. Talking to the James, the front man and lead vocalist, we find out more about the upcoming songs and performances.

In the initial stages, Thakara which is made up of James Thakara (lead vocalist and founder), Ashish Borde(bass), Sujay Subash (guitars), John Joel (drums/acoustic guitar) and Abru Manoj (lyrics) was just a studio band that wanted to release music videos. James shares, “We were a group of film makers who wanted to release music videos as a fun project. I feel that the best way to learn is do it ourselves. Our first  two songs Podi Penne (2011) and Puttu Patu too went viral on YouTube. We really enjoyed the whole process of song making, and that is when we went ahead and decided to make a living out of it.”  They started playing professionally after doing Music Mojo in 2016. James shares that Thakara as a band does not focus on one particular genre. He explains, “We have done over 10 originals till now and each of them focuses on various themes. The theme for us is more important than genre. The songs that we write deal with society, breakups, the respect we give elders, celebrating the black colour etc. While one of the songs need aggression, we use rock. So there is no particular genre.”

Sharing the story behind the band’s name he adds, “Thakara can either mean waste tin or small sapling. The way music found me is sort of symbolic to the band’s name.” While the band follows other artists, James says that their role model are what heir previous songs embody. “We don’t try to imitate any band but the band tries to re-discover itself with every song we write,” he shares adding that each band member helps in composing the songs and adds their own elements to the songs.

Thakara so far has only performed in Kochi, Bengaluru and Chennai, but now they are looking to spread their wings to the north as well. On their performance in Bengaluru he shares, “We have about one and a half hours this time, so we will be doing all of our originals songs. As audiences, you don’t have to know Malayam to understand what we are trying to convey through these songs. The visuals that will be played alongside will help you with that.” Once they are done with Bengaluru, they are in talks to perform in Mumbai, Delhi, Hyderabad and Pune.

Thakara is all geared for the release of four new songs that they have written. James shares, “Paadila, Ammachi, Anaadha Parava and Kurumulagu are inspired by things happening around us.

For example, Ammachi deals with the way we treat elders, Kurumulagu celebrated the colour black etc.” The band has planned to tour with these songs which will be released some where in April as well as release a music video.” On whether the band has won any awards, “As a band, we don’t believe in awards. Our award is when people listen and like our songs,” James concludes.