An ocean of music

Indian Ocean does, however, admit that online is the way to go, with focus on positioning, rather than pricing. 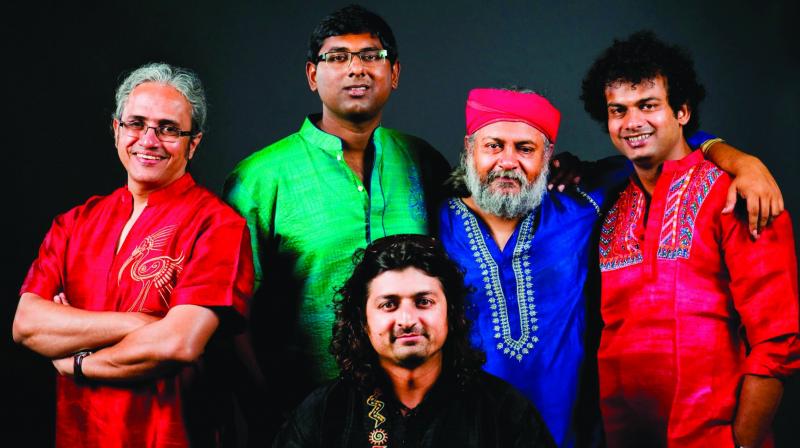 One of Indian Ocean’s longstanding mantra is that they must play their songs live before they actually record their tracks.

As they take on Mumbai again, fusion rockers Indian Ocean talk about evolving their music release with changing times, reinventing a Nusrat classic, and more.

As they prepare for their Mumbai show — a city they’ve been immensely fond of for over two decades — fusion rock band Indian Ocean mulls over the change indie music in the country has undergone in the recent past.

For one, the band believes that people don’t buy music anymore. “Most people expect to get music for free online, via download or streaming,” says Amit Kilan, percussionist with the band.

And so, the band, that has been active for over 28 years now, hit upon a plan to change their model somehow. The idea is to release their music as singles. “We feel releasing our songs as singles will allow for each track to shine on its own merit, and capture the imagination of our audience,” explains Rahul Ram. The band, consisting of Amit on percussions, Rahul on bass guitar and vocals, Himanshu Joshi on vocals, Tuheen Chakravorty on tabla and Nikhil Rao on guitars, hopes to experiment with the format, giving each of their songs its time in the sun.

Indian Ocean does, however, admit that online is the way to go, with focus on positioning, rather than pricing. “From timing, platform or spin, we have some strategic partnerships going,” reveals Amit. “Some exclusive audio releases, some free downloads and some music videos will constitute of the plan.”

And true to their idea, Indian Ocean is set to play three yet-unreleased songs in Mumbai, to give them the exposure. Jaadu Malaya and Soch Mat are original compositions by the band that composed the famous Bandeh, from Black Friday. The third track is a cover of Nusrat Fateh Ali Khan’s Akhiyan Udeek Diyan.

“We love performing in Mumbai,” grins Susmit Sen, the founder of Indian Ocean. “The audiences here are always appreciative, and we believe they are a lot more exposed to all forms of music than in most other cities. It’s the entertainment capital after all!”

Quiz them on how they zeroed down on this track, out of the Sufi singer’s repertoire, and Asheem says, “We at Indian Ocean have always loved Nusrat saab and his music. When our label to get artistes to cover and remix his songs approached us, we were tempted to go out of our comfort zone and attempt a reinterpretation of someone else’s music. It was Himanshu (vocalist) who actually zeroed down on Akhiyan Udeek Diyan, and we all agreed it’s a song that everyone knows and has a great inherent beauty in the composition. So, we thought, ‘Let’s do our spin on it’. And honestly, you’ve never heard Nusrat being interpreted the way we have. Hopefully, everyone will like what we’ve done with it.”

Susmit goes on to explain that the real challenge here is to repackage a song that everyone is familiar with, in a new light. “We’ve moved around the entire feel, and have used additional lyrics on Akhiyan Udeek Diyan as well. We believe we’ve hit on a new aspect to the song.”

One of Indian Ocean’s longstanding mantra is that they must play their songs live before they actually record their tracks. “This allows us to test them and figure which parts work, and which don’t, using live audience feedback,” shrugs Asheem about the rather different method. “We then go back and jig the song to make it perfect. This also ensures we know the songs like the back of our hands before we record them, making the process more efficient.”

The band has had over seven albums and has lent their music to over 10 movies, including the likes of Gulaal and Masaan. And as they try to take on a new route to make their music, they explain that this is but a stepping-stone on their long journey.  “We plan on doing what we do for as long as we can, and there will be more releases in the future,” says Rahul. “We’ve gone the album route always, so we will try singles this time. Depending on how it pans out, we will either stick to it or go back to albums. Nothing is set in stone, and we love experimenting with our art.”