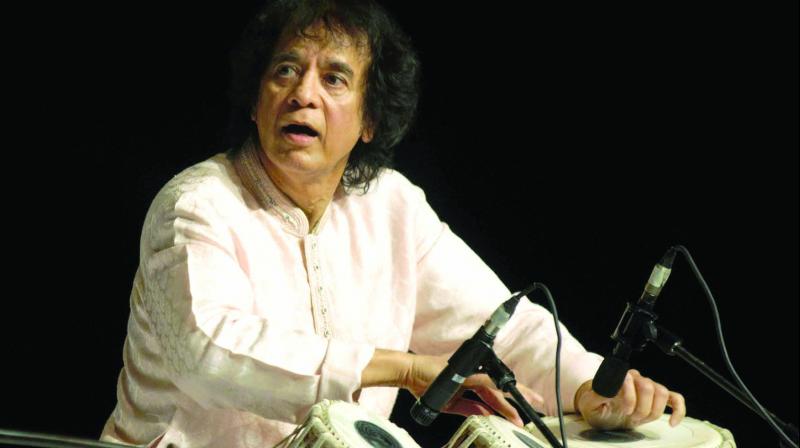 When tabla maestro Zakir Hussain said “Wah Taj”, little did he know the brand he was creating for himself, although the tagline was just too good to refuse. The campaign, he says, has helped him get the visibility he needed, although that has been his only ad.

“I did not hire an agent to get me film roles. I did the ad because I felt the honesty in the tagline would do the needful. I just did that one ad as I was traveling around the world playing in about 180 shows a year. I got the right exposure. There was a visual/ facial recognition, that I got where people would just exclaim - ah so it’s him,” he remembers.

He explains. “I have been lucky that there’s been a lot of audience who stayed back and have been part of the support group for all these decades.”

During an extremely modest conversation on his huge brand value, he explains, “I am not the best player. I am one of the good players and this is the fact. Just that what I have done resonates with people. You can play music until the cows come home but if you don’t get the visibility you won’t get the kind of focus from the audience.”

According to him, the hottest selling instrument globally is the tabla and it also happens to be the greatest bench strength in Indian music. “So we have arrived somewhere and people are having a great time with it, often banging your frustrations away. Things are good,” he says.

The Padma Shri and Padma Bhushan recipient, who recently got a Lifetime Achievement Award by former Grateful Dead drummer Mickey Hart and was also honoured with the United States National Endowment for the Arts’ National Heritage Fellowship recently performed to a jam-packed audience. Ask him about his recital he promptly says, “Its’ not a Zakir Hussain recital. It’s a Zakir Hussain, Ananta Krishnan, Naveen Sharma, Sabir Khan recital. These are top shot artists – musicians who have proved themselves time and time again all over the world. I am proud to be sharing the stage with them and you will see they are so fantastic. I am fortunate that they are there,” he explains.

Sharing fond memories of his first association with the Sri Ram Kendra when he was just a 15-year-old lad, he recalls, “I wasn’t supposed to play. I came in with my father who was playing with Ravi Shankarji. The organisers were waiting for the dignitaries to arrive. So they put this young boy up on stage as a filler.  As they were announcing –  Now you are going to hear a tabla solo by Zakir Hussain – in walked President Dr Zakir Hussain. They couldn’t have planned it better. Dr Hussain looked completely baffled. So that’s how I got to meet him and played for him. I was a filler at 15 and now I am 68. It’s a long journey,” he smiles.

“I have been trying to reinvent myself. I have to. I have to find a new language to tell the same story. The story doesn’t change. We play the same things we have been playing for past 300 years. But how you tell the story and how it resonates with the audiences makes the difference. I owe a lot to my fraternity to be supportive. My first and last love is the tabla and I know I do that better than anything else. It’s a friend, a lover, a sister. I feel that relation is very exciting,” he quips. Music and transmission of music, he says, have crossed all boundaries. It’s not that you only do a Kathak repertoire or only a tabla repertoire. The scope is expanding.

“You can well imagine there are things I have learnt from my father who has learnt from his guru and grand guru – some 200 year-old stuff and it’s possible for a mridangam player from south India to execute it. It’s not easy though because he has to take down all that information which is in a different language and then superimpose them on to his own instrument and find out how to do it. Musicians, today, are doing that and you have a dholak player who is doing that. There’s no barrier and it’s great to play with them on stage and play a tabla repertoire or a mridangam repertoire and just look into each other’s eye and we are all one the same page, that’s fantastic. We go on stage and what will happen will happen. Because of our mindset we think it in the same manner with the same wavelength and same kind of love. There is that level of confidence in each other to be able to take that leap of faith and try new things.”

2019 is the centenary anniversary year of his father and guru Ustad Allahrakha and his tour to India is around that event. Some 200 musicians world over are expected to play on his birth anniversary - April 29 in Mumbai, with some musicians skyping parts of their performances.

It is believed, when Ustad Allarakha held his two-day-old son for the first time, he whispered a tabla bol into the infant’s ear, instead of the religious prayer a father is supposed to whisper into his son’s ear. When chided by his wife, he is reported to have said, ‘This is my prayer’.

Listening to Ustad Zakir Hussain talk about his father and guru, one gets feel the spiritual connect – not so much in seeking divinity outside music, but within it.

“I was also born at a time when some of the best musicians were just popping up like Shiv Kumarji, Hari Prasadji, Sultan Khan saab, Amjad Ali Khan saab. They stayed by me.  You cannot do it alone – you always need a combo like Ravi Shankarji always needed Ustad Allahrakha and vise-a-versa. I have to say, it’s not me. I am partly responsible but not fully responsible for who I am today and I have been very lucky,” he recalls as he stares through the journey of time.

“I remember my father. He was a very serious man but when he would play suddenly there would be a smile on his ace and all the years would just melt by. I always prayed that I would have that relation with my instrument. I think we are arriving there,” he says adding, “I would like to think it as - I haven’t done something incredible. I am just a regular tabla player. And it’s not my modesty. It’s a reality.”