My base will always be here, all the musicians I want to work with are here, let me put it this way, my dog is in India!! 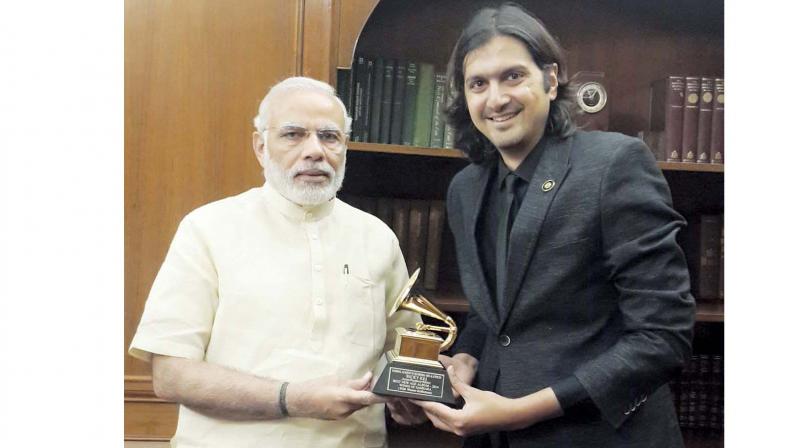 Ricky Kej, Grammy award winner, composer extraordinaire, and conservationist has created a unique musical niche for himself. The genre of his music defies description; his musical work focuses only on the causes dearest to his heart — conservation, environment and wildlife preservation. Extremely humble (“I only work with musicians who are better musicians than me”) it was easy to get him to talk about his music.

Ambassador to Earth Day India, the US based organisation focussing on environment, Ricky Kej performed at a concert in Bangalore yesterday.

Ricky, start at the beginning please!
My mother is a Punjabi, my dad is a Marwari. I was born in North Carolina; my dad had no intention to return to India, so he had shortened his surname Kejriwal to Kej. When I was eight, my dad decided to bring up his children in India, my parents chose Bangalore as they had no relatives there! So I’ve been brought up in Bangalore, which is my home.

So have you always wanted to be a musician?
I have always been a musician and a conservationist. Definitely, my choice of being a full-fledged artist was viewed with fear as there was, and in fact still is, no traditional career path to become a musician. After my 12th standard exams, my father and I compromised, and I agreed to do a degree in dentistry so I had a career option. (My father is a third generation dentist). During my five years of studying I would make music in the evening, after college, from about 5pm till 2 am, and during this period I made around 3,500 jingles, along with recording 12 albums. I became a commercially viable artist then, yet was studying dentistry as I had promised my parents.

Around 2012 I decided that I would stop making music for commercial reasons — I realised my clients all over the world, all huge brands in the US, France, Australia were spending a lot of money, paying me to make jingles and then spending even more to air these jingles! I realised that these market leaders understood the importance of music in getting a sales message across. I thought, why isn’t anyone using music to spreading a message on positive, meaningful causes? Artists, like Beyonce, talk about the causes they are passionate about but their music doesn’t reflect this, they sing regular love songs.

It’s the same in India; the personality of the artist does not define his art. Vishal Dadlani, a good friend of mine, is best known for Shiela ki jawani; which is this really misogynistic song! I realise he made it because he was paid to make it, but 100 years later he will be judged by his art; no one will then think oh! he was paid to make the music he did.  It will be, this is a misogynistic song so he must be a misogynistic man. Actually, Vishal is a thinking man, dedicated to several great causes, with strong convictions. In the case of Shiela ki Jawani, the song reflects the opposite of what Vishal stands for.

I felt your art should reflect your personality. I would rather be relatively less known for my music, which reflects what I believe in, than very well known for music I create that is not me at all. Art needs to define your personality. In the West, Britney Spears songs do correctly reflect her as a person. The dichotomy in our Indian music industry, essentially the Hindi film industry, is that 99 per cent of the music is created by composers who do not believe in what they are doing.

Another aspect is, art in India, and I mean in general, not just the music, is about artists waiting to be paid to make art; it’s commissioned art. I would love if artists could change this, and make music for themselves. Indian film music is either an item song or a love song.

Well, you are lucky to have the choice to choose what you create musically.
I have worked very hard to reach the position where I can afford to make the music I believe in. I still get royalties from the jingles I made.

What are your views on music piracy?
I made a conscious decision that I am not going to make a career in India, despite my music being predominantly Indian, because here there are no copyright laws, there are no proper collection rights societies. In the US, which is today my main market, if a radio station or store plays my music I get paid. There is respect given for authorship; someone may own the rights but a certain royalty goes to the creator for life; 50 per cent goes to the writer, 50% to the composer.

Pt Ravi Shankar, Ustad Ali Akbar Khan, Ustad Zakir Hussain and Anoushka Shankar, in my opinion, understood that their main incomes, their major concerts, have to come from abroad, as their music is protected there. Pt Ravi Shankar is my idol as he opened a door for us in the West, and today people like me can go through that door.

Look what a name he has today, yet there would be very few people in India who can perhaps name an album or a song of his!!! Yes they know his music, which is available free, but his albums?

I wish this would change, musicians need to feel protected in India.

Bollywood makes great music, but I feel it has a few problems. It’s a huge industry yet in my opinion they are not bothered about music piracy at all. They do not care about piracy of music, as the sale of a film’s music is not important; music in Bollywood films is used to sell the movie. In fact, piracy is the best way to spread the music, and thus indirectly sell the film!!

Tell us how you performed at the UN General Assembly?
Well, after my album Winds of Samsara, (the highest selling instrumental album in the US in 2014 for two months) won the Grammy, Prime Minister Narendra Modi contacted me. We had an hour-long conversation on my career and my interest in climate change.

He was going to deliver the keynote address at the UN on climate change and he advised me to make some music on climate change; I took it as a challenge and made Shanti Samsara, an album that used 500 musicians from 40 countries, and has 24 songs. The PM launched the album at the Climate Change conference. Later, on July 17, 2016 I performed at the UN General Assembly; a year later, in 2017 I played again at the UN General Assembly.

Tell us about your personal life?
My wife was the marketing head of Zee Kannada; we were friends for about 10 years and then decided to get married. She now handles my public relations. We have decided not to have children, if we change our minds later we will adopt a life that already exists; our legacy is the combined music that we create together.

My base will always be here, all the musicians I want to work with are here, let me put it this way, my dog is in India!!

The writer writes of music, music matters and musicians