Niladri Kumar was only six when he gave his first public performance. 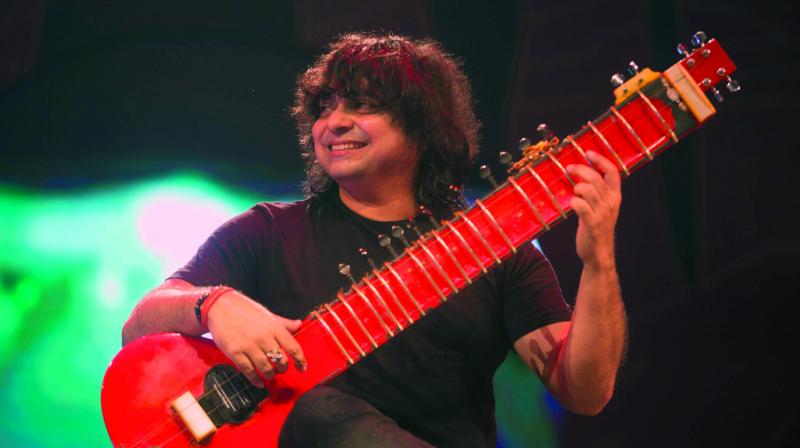 Niladri believes in the magic of fresh music creations, and he tells us more.

Niladri Kumar was only six when he gave his first public performance. Twenty years later, he’s one of the most sought-after musicians in India and the inventor of Zitar, an electric version of the sitar. A fifth-generation sitar player, trained both under his father, the famous sitarist and classical musician Pandit Kartick Kumar, and the legendary Pandit Ravi Shankar, music runs in Niladri Kumar’s blood.

In the last two decades, the sitar player has produced more than 15 albums. One must have heard the great riff lines given by Niladri in songs such as Crazy Kiya Re (Dhoom 2), Bheegi Bheegi (Gangster), Alvida (Life in a Metro), Chup Chup Ke (Bunty Aur Babul) and many more that were chartbusters. The musician has also composed music for Sajid Ali’s Laila Majnu that released recently where he composed four originals and an additional version.

The last time Niladri scored for films was in 2016 with Tere Bina (Shorgul) and Kannada film Niruttara. According to the composer, music should have the ability to paint visuals and films are a perfect medium where story and music go hand in hand.

“I did four songs for the film. They narrated the script and were open to what I had to bring to the table. They didn’t come with any fixed kind of music in their mind,” says the sitar player whose first stint in Bollywood was for Lakshmikant-Pyarelal as a teenager. “Both Imtiaz and Sajid Ali have a fine and keen ear for music. It’s rare to find a director who is so involved in the music and whose understanding and inputs were so correct. He gave me the freedom and faith to carry out the music the way I had imagined. Even post the release, I’m still getting texts about Aahista, Hafiz and Tum as they are being played on a loop and are growing onto people,” adds Niladri explaining what his playback singers brought to the table. “I had the good fortune to work with Arijit Singh, Shreya Ghosal, Javed Ali, Babul Supriyo, Mohit Suri, Jonita Gandhi and Atif Aslam. Each one brought their own flavour and artistry to the songs. Shreya is simply divine in the studio; her fine precision effortlessness and unmatchable technique and emotion are really commendable. Arijit’s voice has so much feel and his quick understanding, grasp and creativity for a song is really commendable,” he lists.

Talking about the reason behind Zitar’s invention, Nilafri explains that it was due to his desire to reach out to a generation with a sound they understand. “It happened much later in life. The seed to its invention was the sentiment to connect it to this generation. When I made this, I didn’t have a name for it and people used to find the sound totally different,” he says adding that essentially both the instruments are similar. “When you make any instrument electric, the possibilities increase manifold. But then even an electric instrument has its limitations. So, while the training comes from one place, it is the approach that differs, resulting in different outcomes,” he smiles.

With his roots planted deep into Indian classical, it was his inclination and the intention that made him venture into the fusion genre. “Any music that forms a bridge between genres is called fusion. It is a way of trying to establish a communication with people you have never communicated before,” says the fusion music exponent who finds stage performances the most enjoyable. With concert season kick-starting soon, the musician is gearing up for it. “The travel and tours for the sitar and zitar are beginning soon. I also have a few film projects and am looking forward to announcing soon,” he signs off.