Ustad Amjad Ali, a true master, with his electrifying stage presence, did ample justice to his own creation, playing with a meditative exactitude. 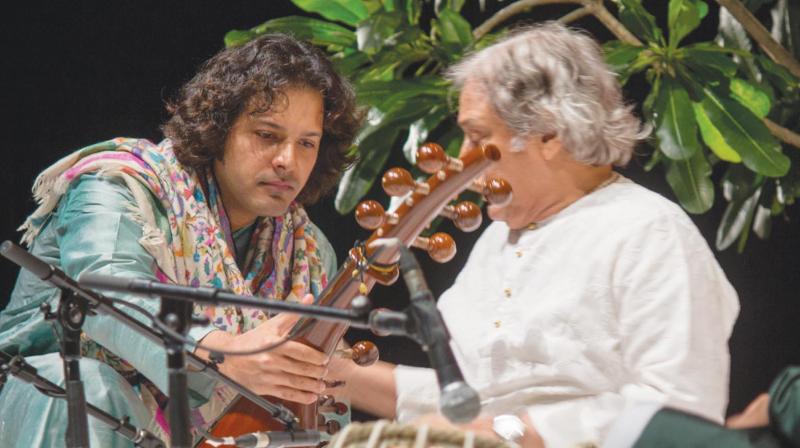 For the last 70 or so, an annual festival of musical tributes by artists for another artist, Pt Vishnu Digambar Paluskar has been organised in New Delhi; history of sorts was made at this edition, when a musician father took over from his musician son, to conclude the latter’s sarod recital.

Ayaan Ali Khan had started his sarod concert with Raga Kamod — A very lyrical yet serious Raga; Ayaan’s treatment was thorough, showing various aspects of the Raga, not just stressing its most commonly known facets. His musical conceptualising is well developed, and distinct from his famous father, who has in the past unearthed aspects of Kamod most expertly.

However, from the start of the recital, Ayaan’s nails were giving him problems (the sarod is an unusual instrument which is played with the nails; the correct angle of the placement of the nail results in the truest sound), and he kept needing to halt the recital to file them. After an “auchar” (condensed outline of the Raga), he went into a gat in deepchandi taal, accompanied ably on the tabla by two representatives of the new generation, carrying forward a rich legacy from the past — Shubh Maharaj, grandson of the legendary Pt Kishan Maharaj, and Akbar Latif Khan, son of Delhi’s much loved Ustad Latif Ahmed Khan.

Despite constant interruptions, a visibly disturbed Ayaan managed to keep the flow of the concert intact, and executed some thought provoking laya work, clear fast taans and tithais that his gharana is well known for. However, after concluding the recital with a fast, somewhat over loud jhala, Ayaan had to ruefully appeal to his father to continue the recital, and play Raga Hafiz Kaus, a Raga composed by Ustad Amjad Ali Khan in memory of his father, the incomparable Ustad Hafiz Ali Khan.

Ayaan said he loved the Raga and had wanted specially to present it on this stage, but now due to a “technical problem” could not play. Ustad Amjad Ali Khan came on to the stage amidst a standing ovation to play Raga Hafiz Kaus. Amazingly, he played Ayaan’s sarod, using Ayaan’s jawa too, which as sarodiya Pt Biswajeet Roy Chaudhary put it, “was something only Ustadji could do, as one gets used to one’s own instrument, and to change to another, that too on stage is awe inspiring”. Ayaan Ali later said Raga Hafiz Kaus had elements of Rageshwari, Jog, Kanhra, and of course Malkaus, using both “gandhars” and both “dhaivats: to create a somber and grave Raga, difficult to execute.

Ustad Amjad Ali, a true master, with his electrifying stage presence, did ample justice to his own creation, playing with a meditative exactitude. Even his hold of his instrument gives one the impression the sarod was made for him alone, the positioning of both hands perfect, and unmatched! His signature jhala in conclusion created his own unmistakable “lau” (rhythm), resulting again in a spontaneous standing ovation.

The festival had started with lesser heard Vidushi Jayashree Patnekar. An erudite singer, with the pleasing and now rarely heard presentation style of yester year, Jayashree ji was to have performed on this stage 15 years ago, recalled festival presenter Pt Madhup Mudgal, but for a variety of reasons could not sing. Her opening concert was impressive; the taan patterns were an interesting mix, the pieces short and crisp. She started the recital with the somewhat obscure Raga Lalita Gauri, which apparently is a combination of the morning Raga Lalit and the evening Gauri. As such its “shakal” (face) is somewhat convoluted.

The second Raga was Raga Durga, and she concluded the recital with Jaijaiwanti. Indeed an unexpected pleasure, as an elderly listener verbalised, “ye puranne chawal the” (she is like seasoned rice, an expression meaning rare) The second evening started with a vocal recital by Ramakant Gaikwad from Pune, who has trained in the Patiala style, who started with Raga Gorakh Kalyan. His pleasant baritone, with meticulous slow unfolding of the Raga in the vilambit ektaal khayal was soothing. He concluded with the ever popular, nicely embellished “Yaad piya ki aayi”. Niladri Kumar representing Maihar baaj, played his much loved Raga Shudha Kalyan. He etched it in his own inimitable style, unconventional presentation, with a stylised use of notes. The extended “auchaar” fully brought out all the facets of the Raga, with delicate use of the “nikhad” and ‘madhyam.

The next piece was his own creation Raga Tilak Nat, so called with great hesitation, because as Niladri verbalised, it’s a very big thing to say you have made a new Raga. Essentially Tilak Kamod, but with the main phrase of Nat, this great piece of music is intensely lyrical, very hummable, and also has the ability to be expanded indefinitely. Niladri played with great delicacy, maintaining the uniqueness of the music.

He concluded the recital with a dhun, in which he brought in elements of Mian Malhar, Gaur Malhar. The grand finale was a very short etching of “Raghupati Raghav Ram”, on request, a creation of Pt Vishnu Diagambar Paluskar. It was indeed a remarkable recital, played by a master of today’s generation.

The festival concluded with morning violin recital by Nandini Shankar, followed by a vocal recital by Pt Sanjeev Abhyankar, and in the evening, flute by Praveen Godkhindi and vocal by Pt Venkatesh Kumar.