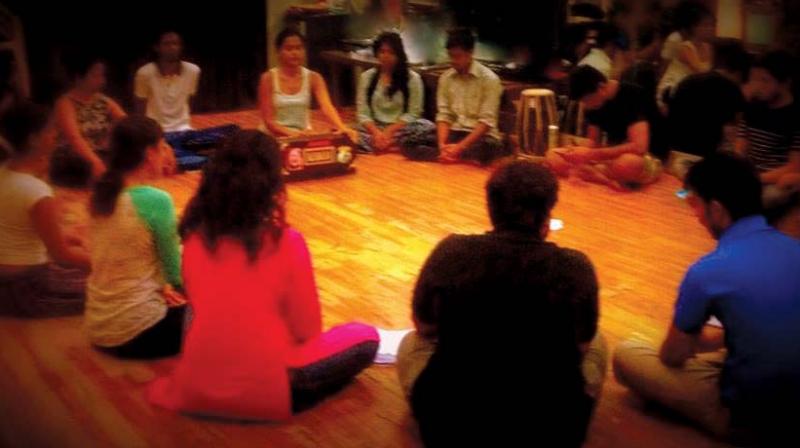 The group rehearsing before their performance.

Responding to the third bell, the actors and the musicians enter the stage, taking their respective positions. Oblivious to the next action, you would assume that the following performance would be a rendition of a love tale. But as the 20 actors from Jhoom Theatre Company, start belting out music for  ‘Ishq Aaha’, the audience is mesmerised.

With the Punjabi folk music as its  core, the performance is divided into four stories — Mirza Sahab, Heer-Ranjha, Sassi- Punnu and Sohni Mahiwal and their carnivalesque glories, told in a mix of folk, kissa, qawwali, jazz and nautanki paired with harmonium, tabla, guitar and sarangi.  “We wanted to make these stories contemporary so that audiences could relate to them,” says Gagan Dev Riar. The actors are brilliant but roping them in one thread was directors’ Gagan and Sukant Goel’s job. “I remember Gagan sir telling me that he went to Punjab and met many scholars and performers who were thorough with the stories  and music. And after almost 15 days they collected the original scripts,” smiles Ajitesh Gupta who plays Mahival in Sohni-Mahiwal story. Ajitesh Mallika Singh who plays Sohni joins in, “The scripts were in Gurmukhi but Gagan sir would read them for us. That’s how we got to know the original stories.”

The stories for the performance is written by Purva Naresh, Amitosh Nagpal, Raghav Dutt and Gagan Dev Riar who have taken up the responsibility of simplifying the stories in order to connect with the present audience. “We have given a new take to the stories, our Heer doesn’t die after Ranjha dies, and she is ambitious. Also, we do not blame Sahiba for Mirza’s death like it is traditionally done. He might have died out of his masculine attitude,” explains Gagan.

Axing the social stigmas like patriarchy, bigotry, honour killing, small town love affairs, the writers and directors have given a broad way of understanding the stories. While it makes the audience mull over questions that every story throws at them, it also steers away from making the issues a focal point.  “We don’t ask any question but tell the story in a way that the audience is forced to think. We don’t intend to have mudda based theatre but let the audience decide,” stresses Gagan.

Before putting together the performance, the team read the original scripts by Bulleh Shah and Waris Shah and tried to distill the essence of their writing. “It was an interesting journey. I have never explored Punjabi folklore and this play has introduced me to various styles of singing. This has been a learning experience.” Adding to this Ajitesh confirms, “We did three-month-long workshop and  had almost nine hours  rehearsal everyday. It’s a result of intense hard work. There is a thin line between thinking and conveying. And that’s very difficult when you have dialogues to sing and expected to communicate your lines to the audience at the same time.”

Challenging the conventional style of male perspective stories, these tales are presented from the female  point of view. Were they sceptical about audiences’ acceptance? “I think the audience is mature enough to connect with musical plays, Infact, they love experimental plays,” Mallika responds quickly.

Happy that they believed in this format, Gagan is ecstatic at the response. “We have got mixed reviews. The  play is witnessing a great audience with good reviews.”