‘Every school should have compulsory classical music’

Dr N. Rajam, Padma Bhushan and Sangeet Natak Akademi Fellow rightly regarded as the face of the violin in North India, is charming, but reticent. 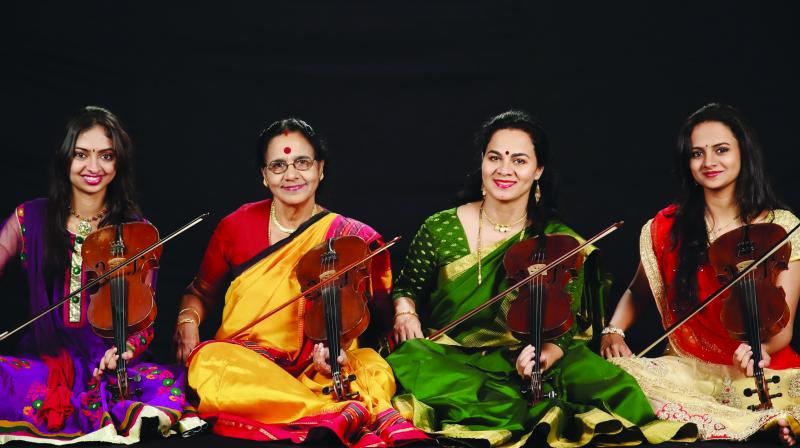 Rajam playing the violin with her family members

An iconic figure in the world of music, Rajam’s numerous achievements defy counting. Today both her granddaughters ably accompany her on stage, continuing the family’s commitment to Indian classical music. In an interview with Shailaja Khanna, the noted violinist says a handful of musicians may be diluting the purity of our traditions, but there are more keeping it alive. So many musicians in the younger generation are purists, she says.

Dr N. Rajam, Padma Bhushan and Sangeet Natak Akademi Fellow rightly regarded as the face of the violin in North India, is charming, but reticent. An iconic figure with her many achievements in the world of music, her numerous achievements defy counting. Today, both her grand daughters ably accompany her on the stage, taking her family's link with classical music to the 9th generation. It was a pleasure interacting with this gracious musician, with the ways of an older, more cultivated generation. Excerpts:

Q. Rajam ji, please tell us about your connection with music, from the beginning.
A. My family has been musicians for seven generations. They were in the Cochin court; we are originally from Kerala. In my father's generation, only he was a musician. Among my siblings, all were musicians, and also their children. Today, there are over a dozen violinists in my family.

My father's contributions to violin, and techniques in violin playing are really praiseworthy. It was he who suggested I train in the North Indian idiom, even though we are traditionally Carnatic musicians. He had a job that entailed travel, and he heard Pt Vishnu Digambar and others who inspired him, so he desired that at least one of children learn this style. So I decided to switch to Hindustani music; I had already been leaning Carnatic music for 12 years and was playing concerts accompanying Smt MS Subbulakshmi and others. But when one is young, it’s relatively easy to switch styles and I managed. I remember I was only 14 years 3 months when I did my Matriculation; whereas the requirement for entry into college was 14 years 6 months! So my father suggested I learn Hindustani music for my Intermediate and appear as a private candidate (this facility was available for lady candidates), so as not to waste time. It was easy for me to cover the entire course fast as I was already a practising musician.

Q. How did you decide to learn from Pt Omkarnath Thakur?
A. I had heard 78 RPM records of Pt Omkar Nath ji Thakur, when I was 13-14 and they left an indelible impression on me. Banaras was my centre for the Intermediate examination and he was the founder principal of the music college there. So things fell into place - I played before him and he thought I had talent and was kind enough to take me on as a disciple. I used to travel to Banaras for my exams, and also for my lessons from Guruji. I lived in Banaras for close to 40 years, as later I got a teaching job there.

Q. Was it difficult for you to adjust to living in a small town in North India?
A. Small towns are closed in everywhere, not just in North India. I was devoted to music all hours of the day, so it didn't really matter where I lived, or the small town mentality. My father was really a strict disciplinarian, and the family was very conservative. And I never lived alone. My parents were with me throughout, till I got married. It's only in the present generation that girls can live alone!

Q. Who were your musical idols while growing up?
A. I was very fond of Ustad Bismillah Khan sahib's style and I was privileged to play jugalbandis with him in Banaras. I consciously heard a lot of vocal music, as my aim was to absorb this — Bade Ghulam Ali Khan, Ustad Nissar Hussain Khan, Pt Vinayak Rao Patwardhan. I never heard Kesarbai ji or Mogubai ji live.

Q. The Carnatic tradition must remain dear to you?
A. My knowledge of Carnatic music remains intense; my standard of it is of the 1960s, quite high. Even now, I can play in the Carnatic style; I just need a week's practice. I don't feel the need to present Carnatic ragas today as there are enough ragas in the North Indian system.

I believe both systems have their different strengths, one can't say one is superior to the other. Both systems have their own distinctive attractive features. My brother (legendary Padma Bhushan Vidwan T.N. Krishnan) and I have played the same raga together in concert; he was playing in the Carnatic way, me in the North Indian way.

Raga Neelambari, which my Guru loved and sang, is different to the Carnatic raga Neelambari. It is prevalent in the Hindustani system; it's an ancient raga.

I feel there should be more exposure of both systems; many festivals today in the North do include Carnatic artists, and vice versa; this should continue.

Q. Do you find many similarities between both systems?
A. The way of presenting the same raga is completely different. It's like cooking — one can use the same ingredients yet the taste is different!

Even in “tala”, the approach is totally different. Despite the common “talas”, there is a huge difference. In Carnatic music, one presents music independently; one does not need the reference of the mridangam, to know where one stands, the counting of “tala” happens constantly, overtly; there is no need to show the “sum” or “khaali” overtly, unlike the Hindustani system. No doubt there must have been a common origin of the music originally but each system developed on its own; unlike nowadays, there was no prolonged interaction between North and South, so influence on each other's development of musical ideas was non- existent. Yes, the basic structure of raga and “tala”, improvisation is the same, but that's why it ends.

Q. Rajam ji, tell us about the violin, and the changes in playing technique that you brought about.
A. When violin came to be played in the North, sitar and sarod reigned supreme. The number of people playing violin in the North Indian system is limited compared to other instruments. So violinists followed the “tantrakaari baaj” (instrumentalist style). The violin in the North has always been presented as an independent instrument, not as an accompanying instrument. In the Carnatic tradition there is no separate tradition of an instrumental style, instrumentalists only follow the voice.

I feel the violin is a very sophisticated instrument; it lacks nothing. I have always used violins which were made abroad, even when I started playing, and also now.

My contribution to the violin playing is the innovation of a highly sophisticated technique on the violin to reproduce the voice as accurately as possible.

Q. Some say our Indian system of sitting and playing the violin gives greater control. Your comments?
A. Several students of mine from the West play standing; they seem to manage to do everything. I think we in India are used to sitting so we play best sitting. I don't think sitting gives better control; it’s what one is used to.

Q. Today, after more than 70 years in the field of music, would you say the presentation of classical music has degenerated?
A. I don't think the quality of our music has degenerated; I think organisations like Spic Macay are doing a lot to promote classical music. A handful of musicians may be diluting the purity of our traditions but there are more keeping it alive. So many musicians in the younger generation are purists; singers like Venkatesh Kumar, Jayteerth Mevundi… I feel the future of classical music is bright, I am an optimist.

I feel every school should have compulsory classical music from kindergarten onwards so we at least create “kansens” (good listeners).