Akram Abdulfattah is no stranger to success in the music industry with all the competitions he has won. 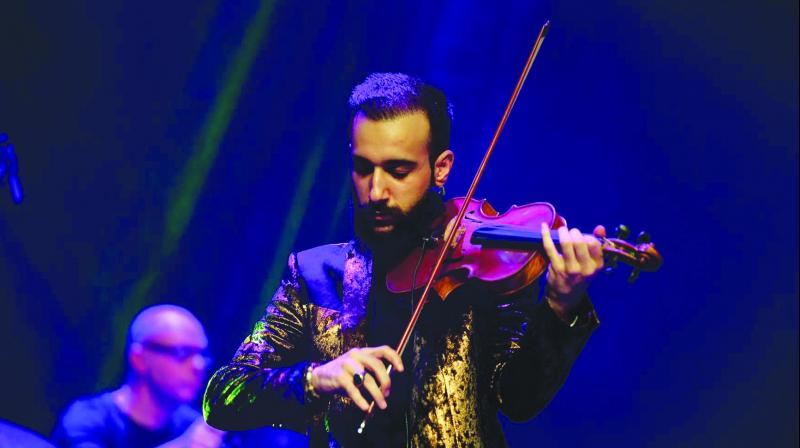 Violinist, music composer and producer Akram Abdulfattah has tasted success quite early in his life. He has been part of many competitions and has won a number of awards. Akram, during this tour in India will be travelling to cities like Bengaluru, Ahmedabad, Kochi, Mumbai, Kolkata and Pondicherry performing some of his compositions. In a chat with him, we find out more about what music means to him and his journey so far.

Born in New Jersey, USA, Akram shares that his first memory of music was in his grandparent’s home. “My earliest memory is playing the Arabic tabla in grandfather’s house with my uncle Yaad. It was never the plan to become a musician although I have always been interested in it,” he adds saying that for his music, life itself is an inspiration as it is a mix of many things. Akram who admires the works of artists like L Shankar and Abdo Dagher is a staunch classical music lover.

Being just 28, he founded a quartet (Awan),  has won many competitions and also produced an album (Jawa).  On what he thinks is his driving force, he adds, “I think that my driving force would have to be the struggles and challenges I faced over a period of time.” Music he says is a universal language, “That’s how we talk to each other and that’s how we communicate,” he quips. Primarily playing the violin, Akram shares that he loves playing the Oud which is a pear shaped string instrument that is played mostly in places like Palestine, Egypt, Yemen and other Arab countries. Talking about the quartet Awan that he founded, he says,

“Awan was the youngest band we formed in Palestine. We were from different parts of Jerusalem. We met at the college, played a concert and continued that way. The genre that we focus on classical Arabic music.” While Abdul won the one first place in the Marcel Khalifa Competition, Jerusalem, in 2006 and 2008, his quartet Awan won The National Music Competition for Ensembles in 2012.

On his tour in India, “Once I’m done with the Bengaluru leg, I will perform at Kochi, Kolkata and Pondicherry. Performing here has been amazing. It’s great to have played with people from different age groups and genres. It was truly an enriching experience.” Having lived in the US for the first six years of his life, he then moved to Palestine where he studied and learnt his music.

“My own compositions are influenced by Arabic, Indian classical, Persian, Turkish and western classical,” he shares. There are a plenty of project that Akram is working on this years, “I’m looking forward to the release of my new album – Monologue. It is an Indo-Euro-Palestinian collaboration, that is set to release in December. I’m also planning on a musical solo trip in Europe. There is a new quartet I’m working on that will have far East Asian influences. I will also will be exploring an exciting experimental music production that will have artistic dance music which is kind of new for me,” he concludes.