Musical tribute to guru, with love

The evening will start with a presentation of rare compositions, in the same Raga, by different generations of Ustads. 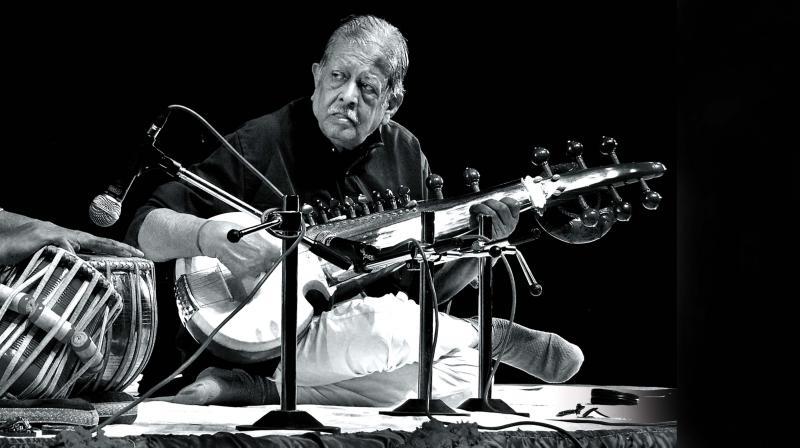 As part of its continuing series of Purnima concerts (earlier concerts have been of Bombay Jayashri, Manjusha Patil and duet of Ronu Mazumdar and Jayanthi Kumaresh), IGNCA is holding a special concert for Guru Purnima. This day has a particular relevance for musicians all over India as it is a day dedicated to your Guru; remembering him if he is no more, or celebrating his life, as the case may be.

This February, the world of North Indian music lost one of its most erudite instrumentalists, a veritable ocean of knowledge, and a truly prolific Guru, Padma Bhushan Pt Budhadev Dasgupta. Another invaluable attribute was his strict adherence to the purity of the Raga; the question of even a slight deviation in the grammar of the Raga was unthinkable. Yet he was also amazingly creative, and brought in a lot to the music he inherited and which he guarded so zealously, and imparted so openly.

On the first Guru Purnima after his death, some of his many disciples will be performing in his memory at the IGNCA auditorium, from 630 onwards, on Sunday 29th July.

The evening will start with a presentation of rare compositions, in the same Raga, by different generations of Ustads. Nowadays, most instrumentalists play “gats” (compositions) without knowing who the composer was. From “bandishes” (compositions) by Ustad Murad Ali Khan, his adopted son Ustad Abdullah Khan, to his son Ustad Mohammed Ameer Khan, and his disciple Pt Radhika Mohan Maitra, and finally, Pt Budhadev Dasgupta himself, the entire evolution of sarod craft over 150-200 years will be visable in the construction of the compositions. Pt Budhadev Dasgupta was meticulous in remembering the provenance of the compositions he was taught, and three of disciples will first showcase this aspect of his music. As Prattyush Banerji commented “we will try to present the most beautiful compositions we know, not considering the time factor of Raga presentation.” (According to the Time theory prevalent in North Indian classical music, Ragas are to be performed according to time; it is not “de rigueur” to play a morning or afternoon Raga in the evening, or vice versa.)

Prattyush Banerji is not just a very fine sarodiya, he is also a composer, and music arranger for albums and films; he has learnt Western music as well, and has a questioning innovative approach to his music. Debsmita Bhattacharya is one of the few lady sarodiyas making waves today in the world of music, and Delhi based Smarajit Sen is the sitariya, to provide the counterpoint in their presentation. Smarajit, as the junior most disciple, currently a teacher at Amity, was upbeat about his presentation “this is a rare opportunity to perform along with my senior Guru bhai, and Guru behen, to play some of the gats we have been taught. I really miss Guruji’s scolding, in which there was his immense affection and need to impart his knowledge. He really was the kindest most generous Guru; we are all lucky to have each other.”

The next item of the programme will be a short audio visual film on the maestro, which should be of great interest as Pt Budhadev was truly a multi facetted man. Despite being an engineer, with a high ranking job, he also was one of the most knowledgeable erudite musicologists of his time, in addition of course to being a great instrumentalist. He also wrote on music. The concluding item of the evening is a “jugalbandi” (duet) between Pt Debashish Bhattacharya, one of his senior most disciples on the sarod, and Pt Sugato Nag on the sitar. Associate professor at Rabindra Bharati, Pt Debashish Bhattacharya is an elusive musician, rarely heard, but of noteable stature. Incidentally he is also the father of Debsmita. By profession a mechanical engineer, like his Guru, Pt Sugato Nag is perhaps the most popular and best known of the doyen’s disciples.

After the death of their Guru, the small band of disciples has certainly been left bereft of his physical presence, but their strong bonds of shared music bind them together. Both the maestro’s are sarodiyas too; Bhavani Shankar is Kolkata based, and Anirban lives in the US.