As I Lay Dying was in the house! And we managed to catch hold of Jordan Mancino. 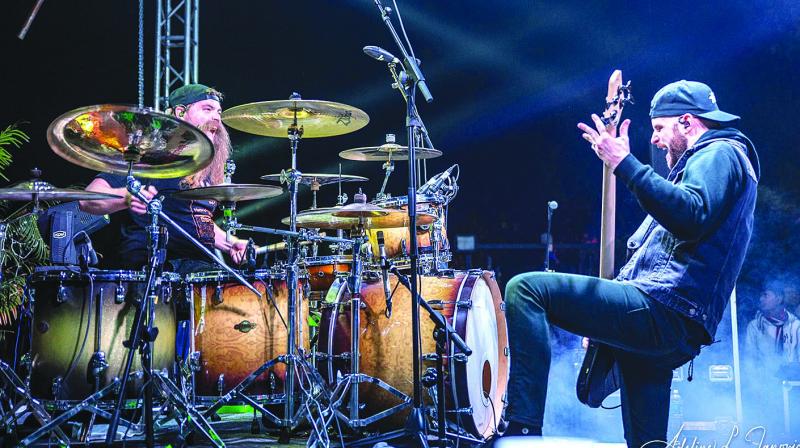 Celebrated as a quick-paced band of heavy music, the band has entertained audiences worldwide with their music.

When it comes to metal music, one often recounts the adrenaline and energy that comes with it. Be it the likes of Metallica or AC/DC, or even a band like As I Lay Dying.

Most recently, the Grammy-nominated band As I Lay Dying, touched down in the capital and enthralled the audiences at the Big Horn Music Festival 2020 organized by Skillbox with their music.

Celebrated as a quick-paced band of heavy music, the band has entertained audiences worldwide with their music. Speaking to Jordan Mancino, the drummer, on his 20-year journey with the band says, “It’s been amazing thus far.  Reconnecting with each other and reconnecting with the fans has overwhelming to say the least. We are so thankful for our fans for the support.”

Though the band boasts of performing worldwide, performing in India is a different experience for them. The drummer comments, “We had a great experience performing in India. Looking forward to heading back and playing more shows and cities that we weren’t able to get to this tour.” So was the band surprised with a massive turnout of Indian enthusiasts? The answer is, yes! Jordan adds, “We were definitely surprised, in the best way!  It’s a special feeling that our music has reached those on the opposite side of the world. We are grateful and honoured by our fans in India.”

There are nerves felt when one performs on stage for the first time. But one wonders if Jordan and the group still feel the nerves even today or not, he answers, “Absolutely I get nervous! But the nerves have changed over time. I used to assume that the nervousness I felt before a show would go away the more I played.”

He adds, “Eventually, I realized that the nerves weren’t from a lack of confidence of what I was going to perform on stage it was a result of the passion that I had for playing and music that we performed.  To sum up, the day I don’t get nervous before a show is a day the passion is gone. And that still has never happened!”

There are often misconceptions associated with metal music. The drummer points out that one of the common misconceptions of metal music is that the inspiration comes from a negative place and content of the art is negative, projects negativity and/or has no positivity within it.  He states, “That is completely false!” Jordan continues, “Although heavy music can be focused on the darker parts of life and the world, that doesn’t mean I can’t be an outlet for positivity that results in positive change for the future.”

There must have been a fascination of being in a band once in life. So, we decided to ask Jordan as to what band life is like. He responds, “Band life is busy usually.  Lots of travel and prep for tours, shows, recording, etc.” But, there is one thing he most certainly enjoys, “I’d say the most enjoyable part for me is playing shows.”

The love for overseas music is definitely immense and it is that love for music that makes people want to pursue music. To all the budding musicians, he advises that it is important to have a  “solid and flexible work ethic”. He adds, “Be willing to take chances if and when the right opportunities present themselves, meanwhile also things happen for your band. And don’t be afraid to push yourself beyond your limits because that’s how you improve.”

He concludes the conversation by thanking the audiences saying, “we want to thank the fans for welcoming us to their country and the organisers of the tour for bringing us over there.”

Tags: as i lay dying