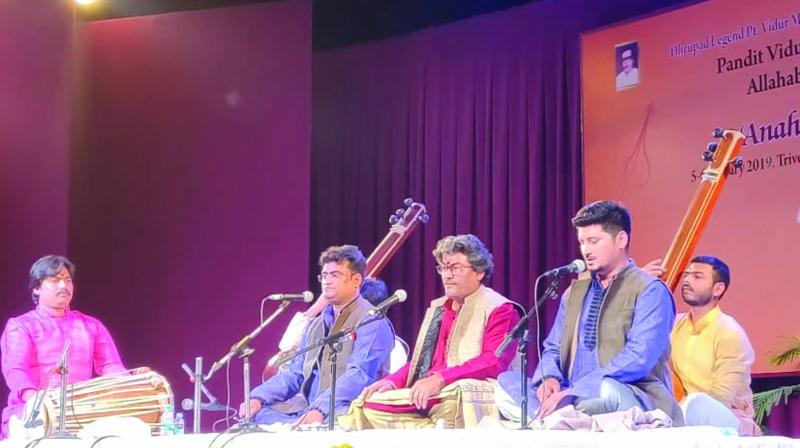 The conclusion of the two-day musical offering was by Pt Prem Kumar Mallick, accompanied by his two sons Prashant and Nishant.

Dhrupad is the oldest extant form of classical music – practiced in both North and South India. In North India, there were four styles of dhrupad; today three remain with active practitioners—the Mallicks of Darbhanga sing a mixture of Gauhar vani (the style of Mian Tansen) and Khandar vani (the style of Mian Tansen’s daughter and son-in-law). For the last 300 or so years, the family has carried forward this ancient musical tradition; currently, Prashant and Nishant Mallick, the 13th generation in a direct line of musicians are the torchbearers of the gharana in their generation.

A two-day festival remembering their grandfather Pt Vidur Mallick, and pakhawaj maestro Pt Yamuna Prasad Chaudhary was held at Delhi’s Triveni auditorium. Entitled Anahad, this was the third edition of the festival and featured recitals of both doyens disciples, as well as concerts by senior artists of other streams of music. Pt Yamuna Prasad Chaudhary, though a zamindar, was a very fine pakhawaj player of Darbhanga State and belonged to the famous Kadau Singh tradition of Pakhawaj. Though older than Pt Vidur Mallick, the two masters had a close association and performed together for many years; it was appropriate to celebrate their music together.

The festival opened with a vocal dhrupad concert by Brij Bhushan Goswami, originally from Barsana (the village where Radha was born) but today a resident of Delhi. He had trained under Pt Vidur Mallick for several years. His concert encapsulated the extensive range of the gharana. The next offering was by Pt Vidur Mallick’s granddaughter, Priyanka Mallick Pandey who unusually sang khayals, not the traditional dhrupad her family is known for. It was welcome to see a lady practitioner from this gharana, which has traditionally been a male bastion. She has a powerful husky voice; her second piece, a dadra “rang saari chunariya” in Mishra Pahari demonstrated her facility with thumri as well. (The Darbhanga gharana has always sung thumri in addition to dhrupad)

The next concert was by Imdadkhani gharana sitar maestro Ustad Shahid Parvez Khan who rose to the occasion of the intimate “mahaul” (ambiance) created at the festival by the rapt audience, and the artists seated in the front row. This was not a glitzy gathering of listeners wanting light gimmicky music; Ustad Shahid Parvez accordingly treated his sitar with deliberation, creating a meditative exploration combining lyricism with gravity. His attempt was not to thrill but to create a sense of calm with his music. His effective use of space between notes, pauses and silence gave the recital a welcome novelty. On the tabla was Pt Mithilesh Jha of Delhi, whose accompaniment never intruded.

The next day featured a pakhawaj solo recital by Pt Ajay Chaudhary, grandson of Pt Yamuna Prasad Chaudhary. Today, the senior most pakhawaj player from Darbhaga, Dr Chaudhary remarkably is also a feted eye doctor. The next concert was by Ustad Iqbal Ahmed Khan of the Delhi gharana; a novel element in his performance was the inclusion of Tanveer Ahmed, son of Ustad Nissar Ahmed Khan, whose “taans” impressed. Ustad Iqbal Ahmed Khan laudably is known for sharing his concert stage with several deserving members of his large extended musical family. As the head of his gharana, this is his duty as well.

The conclusion of the two-day musical offering was by Pt Prem Kumar Mallick, accompanied by his two sons Prashant and Nishant. Prashant very dutifully commented that whatever one’s stature as a musician, when one sits with one’s Guru, it can never be as an equal, but always as a secondary voice. It is believed humility in music always invokes blessings and increases receptivity; both brothers’ music amply proved the truth of this belief.  The trio created a magnificent atmosphere in the limited time at hand; the pakhawaj accompaniment of Gaurav Shankar Upadhyay was superb. Indeed, their concert was a fitting finale to a wonderful tribute to two master.