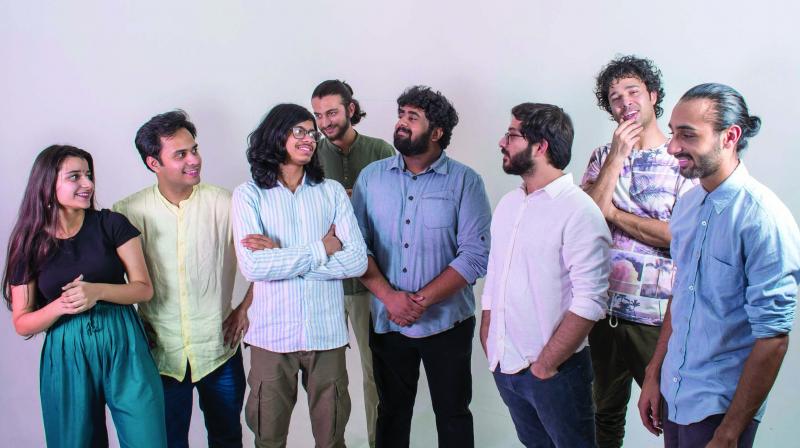 In a bid to bring back the nostalgia of some of the greatest tunes of all time in their own way, The Revisit Project has come a long way in the tribute music scene of Delhi.

When it comes to music, there is a reason why classics are called classics. They are timeless, they are one’s formatives when learning music and they form the base that propels musicians to write their own music. And the same is true for the band — The Revisit Project.

Set up in 2014, the band started out by playing their versions of old Indian compositions like those of R.D. Burman and A.R. Rehman. Their music would add a contemporary twist to the classics. “We were revisiting these guys, basically,” says Abhay Sharma, the band’s saxophonist. The band’s genre can be broadly categorised as Jazz.

But what started out as a tribute band, soon became a band with a vision to write their own music. The band had just released their first album titled Here We Go in 2017 when some of the members started leaving. But now it’s all honky dory as the line-up has new members, namely Abhay Sharma (Saxophone), Aditya Bhagvatula (Drums), Birraj Singh Taneja (Keyboards), Varun Rajasekharan (Percussions), Kanu Gangahar (Guitar), Karan Wadhwa (Bass), Chetan Dominic Awasthi and Vrnda Dhar (Vocals).

Being a band playing jazz music and being a band playing music influenced by jazz are two completely different things. Abhay explains, “Jazz is a very different art form in the sense that there are various understandings of jazz. There is a traditional form of jazz music, and then there are variants of jazz.” He points out that even if one writes a pop tune and improvises it, it won’t become jazz music but simply jazz-influenced. He feels that there are certain kinds of sensibilities attached to it which are different in terms of harmony, melody, and rhythm.

Though Abhay’s previous bandmates left, there isn’t any bad blood. “It’s part and parcel of being in the music industry. People who really want to make music will eventually come together no matter what,” he says, talking about his new line up that came together in 2018. “The original music that I always wanted to write was jazz, funk and instrumental music influenced. And whenever we are revisiting a song, we don’t change the melody that much but harmonically, we change the chords and arrangements.”

Being in the music scene for over five years, Abhay shares how clubs tend to pay bands lesser today than ever. “If you dream about being a big person without being a realist, it can come back to bite you really badly,” he shares. Talking about the struggles of bands in the capital, he says, “You have to be a very stubborn person to not give in to the infatuations of money. You have to remain hungry.”

Apart from their new album, which is scheduled to come out this November, the band also has a podcast series in the making. The inspiration behind it, he says, “There are some stereotypes about music and musicians that we are trying to discuss and put an end to. It is also another way of keeping in touch with our crowd.”

Abhay also has a piece of advice for up and coming musicians. “Shut up and listen! I would want people to be inquisitive enough about music,” he concludes.