With warm, breezy music, The Wanderlings’ songs make their way into the listener’s heart. A quick chat with the young band. 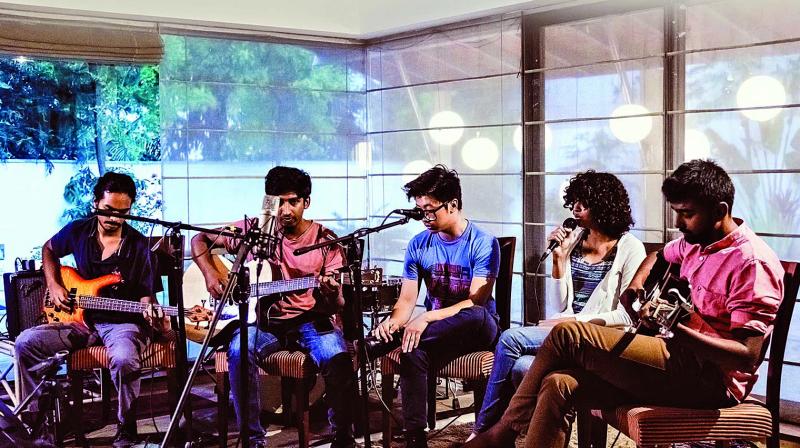 They recorded four songs like that — one of them being 'Enjoy It While It Lasts'.

Flipping two couches upside down, a few young people squeezed inside the narrow space, making it as soundproof as possible. They recorded four songs like that — one of them being 'Enjoy It While It Lasts'.

More than a year later, when Easy Wanderlings released their first album, they remade all the songs, added four more and hit the studio this time, for a better sound.

It’s not easy to get the band to open up. In fact, they’ve been wary to tell their names too, preferring to be known for their music instead. But now that their album As Written in the Stars is out, the names had to be revealed too.

The violin on the tracks are provided by Shardul Bapat, while 14-year-old Siya Ragade plays the western flute.

Their sound is a medley of diverse strains that have been stitched together, and touch upon everything from soul to pop, to indie folk. Even with all that diversity, you can play the band’s music on loop, and not be struck by the differences. It gels easily into the background of everyday work. And the band is more than aware of the effect their music has on listeners.

“A lot of people tell us it takes them back to the time they travelled,” says Sanyanth, with a laugh, from Pune. His is the voice in I for Little Things that says “Through all the changes I go through life, I will live for the little things.” Pratika is with him as we talk, and her beautiful voice is what comes through in the first official video, Ode to Bristlecone, which begins with a poem.

“Bristlecone pine trees are one of the oldest trees in the world, and they have seen a lot. We have compared it to the people who have seen hardships in life, and tend to put up walls. This song is telling them to give life a chance,” explains Sanyanth.

You could also connect that to their song Dream to Keep Us Going, with its chorus that goes, “All we need is a dream to keep us going.”

Nearly all of Easy Wanderlings’ tracks begin with the soft touch of the guitar. And while they try all genres, they keep off from really heavy music. Words come barging in on some tracks, while they slowly appear on others. In Going Easy, the don’t come in at all. It’s a breezy instrumental with a sweet whistling sound instead.

The mood of the whole album can perhaps be encapsulated with these lines from 'Enjoy It While It Lasts': “The moment you know that this will end, and stay a memory, or a beautiful dream, why waste time, when there is none, enjoy it while it lasts.”