Down memory lane with maestro vocalist

Music has the ability to transport you to another world. You get a sense of peace with it. Music connects you to your soul. 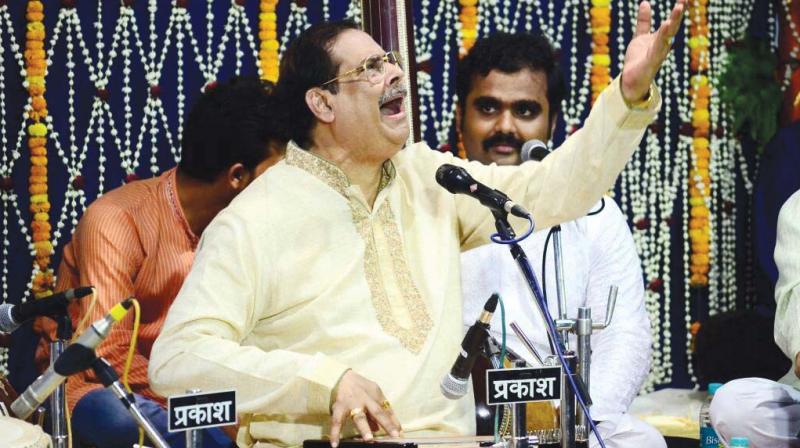 Pandit Ajoy Chakravorty is today amongst the seniormost, as well as most popular Hindustani vocalists. Tall, with an impressive bearing and a rich baritone to match, the Patiala gharana doyen has managed successfully to transcend the barriers of “gharana” gayeki (constraints imposed on the singing style) and today sings incorporating many elements from the Carnatic style as well.

In a freewheeling talk, he spoke about his past, his achievements and a host of other subjects. Some excerpts:

Panditji, would you say you are a self-made man?
No. I genuinely believe, from the core of my heart, that without humility you cannot receive blessings, and without support, you cannot reach a certain level of artistry. Total samarpan (surrender) to the gurus is necessary to absorb, and then transmit. Anyone who says to the contrary is wrong, I feel.

My parents used to sing, but not professionally. My father left Bangladesh to come to Calcutta to learn music. He was a teacher. I am what I am today due to the blessings of my parents and gurus.

I have learnt Sanskrit, and Sanskrit “Uchaaran” from great pandits like Dhyanesh  Narayan Chakravorty and Nrisingha Prasad Bahaduri. I believe that correct enunciation is important for a vocalist.

What is so special about music?
Music has the ability to transport you to another world. You get a sense of peace with it. Music connects you to your soul. Tagore once said that you never sing alone — when you sing, the listeners sing along too, from within. Five aspects make music — correct inhaling and exhaling of air (breath), lyrics, notes, time cycle and attitude to music (humanity). I believe all these are very important. I have my institution Shrutinandan which has been running for 20 years now; I teach over 1,000 students there.

I feel lucky that I have been able to share my knowledge of music and laya (rhythm) with so many artists — I can’t say I “taught” them, but I certainly shared my music with Purbayan Chatterjee, Kushal Das, Tejendra Narayan Mazumdar, Tanmoy Bose, Bickram Ghosh, Samar Saha, all top artists today.

Pt Ravi Shankar once praised my efforts and told me to keep the purity of raga alive and kickling. After his death, I was invited by his wife Sukanyaji to perform in Panditji’s memory in San Diego and Cleveland.

The gharana system is good but also constraining if you confine yourself. You should not feel your father is the best; others fathers are good too!

I sent my daughter Kaushiki to learn from others — including Ustad Mashkoor Ali Khan, who is gharanedaar (from a tradition).

I have learnt from so many people — Hirabai Barodekar, G.D. Ginde, Nivritibuwa Sarnaik, Ustad Nissar Hussain Khan, Dr Balmurali Krishna; in fact, I regarded Balmuraliji as my father, as I had known him since I was 29. Of course my guide, philosopher, mentor, guru was Pt Gnan Prakash Ghosh. He taught me everything — literature, philosophy, not just music. He sent me to Ustad Munawar Ali Khan (son of the great Bade Ghulam Ali Khan); he felt my voice would be suited to Patiala gayeki. My guru insisted that I go to him, with his wife Lalita. In fact, I tied my ganda on the Ustad on the same day that Guruma (Lalita Ghosh) tied the ganda.

Panditji, it seems many things have shaped you as a musician.
The most effective way of understanding and absorbing how to be a musician was when I travelled in acute discomfort during my young days. I once travelled standing all the way from Delhi to Chandigarh, with my harmonium on my head as there was no place to put it on the floor. There was a concert organised by Khosla sahib which I had committed to sing at. I have travelled innumerable times sleeping on the floor in the corridor of a train. Physical hardship too teaches you what it really means to be a musician. It is not only riyaaz (practice) and taalim (training).

I remember once at Dover Lane Music Conference, the premier music festival at the time, I was asked to give a donation and only then would I be allowed to sing. I was only around 27-28 then. I politely refused and said I would like to sing only if I was considered good enough to command my own fees. Three years after this incident, I was again called, but this time I was paid to sing!

I remember Ustad Ghulam Ali Khan from Pakistan was in the audience, and I sang Raga Malkaus.

It was Bade Ghulam Ali Khan’s birth anniversary recently, please share some memories of him.
He died when I was a child, so I never really knew him personally. But I have heard a lot about him. Unka soch bilkul alag tha. (His perspective was different) Jaise log, vaise unka sangeet, vaise unka khaana. (Every set of people have their own music, their own eating habits). He loved his food, and used to eat biryani every afternoon, and feed 10-12 people who were with him, always.

I personally had only one interaction with him — I was a boy when I met him at the Radio Station in Calcutta. He was partially paralysed, and in a wheelchair. When I saw him I dived to touch his feet with my head to seek his blessings. He blessed me, and enquired about my singing, and finally signed off the meeting by saying, “Allah tumhe acha rakhe.” I cherish that memory even today.

Once I heard he gave a sari worth Rs 500 to a beggar outside New Market; he sent his friend Nishi babu to give the beggar the sari, not wanting to give it himself. In those days, his concert fees were Rs 2,000! He was who he was because of all these aspects of his personality. Indeed, there was nobody like him.

He died in Hyderabad though he lived his life in Calcutta.

Panditji, tell us a little about your personal life.
My wife is also a singer though she does not sing professionally. I have two children Kaushiki who sings, and my son Ananjay, who is a professional sound engineer and music director. I have a brother Sanjay, no sisters.

It was difficult to end the interesting chat, but Panditji had to leave for an appointment!