Much pain from T-Pain

Instead of apologizing, Pain responded with a derogatory tweet. 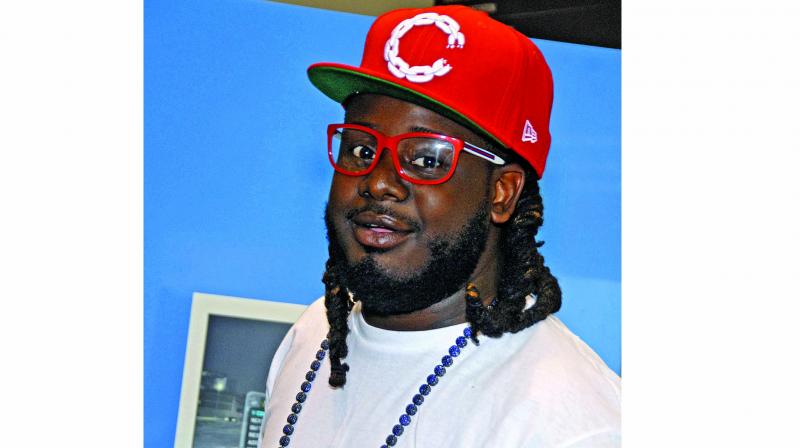 Composer Mithoon suddenly discovered that a riff from his beloved tune Tum hi ho from the film Ashiqui 2 was being ripped off by American rapper T-Pain in the song That’s Yo Money.

Instead of apologizing, Pain responded with a derogatory tweet about waking up to a ‘brown tweet’! Well, the ‘browns’ are obviously not taking this lying down.

Speaking to The Asian Age, Mithoon says, “I’ve to admit the similarity between my song and T-Pain’s track took me by surprise. Tum hi ho is a globally recognised Indian melody. My intention was to just to bring the similarity to his notice.”

On T-Pain’s impolite reference to his polite objection to plagiarism, he says, “I’d like to believe he didn’t mean to offend. I wouldn’t like to comment on that aspect of his response. I am proud of my ethnicity. And after the kind of progress we’ve made as global citizens we should be focusing on music, not the skin colour. This is not how we should be dealing with an issue as serious as this. I am even willing to believe that he hadn’t heard my song.”

Arguing that he was not that arrogant to believe the world had heard his song, he says, “I think there should be more accountability about where music samplings come from. I look at this as an opportunity to reach out. If he had reached out to me and my producers T Series, with the permission to use a melody, that would be a wonderful collaboration. Then it becomes a celebration of creativity.”

Pointing out that creative work is not owned by any one person, Mithoon avers, “If I like something by someone that I want to use I’ll take the proper legal consent.”

So how is he dealing with this illegal snatch? “My company T-series is taking legal action. The video was blocked on YouTube and now legal action is being taken. This must and should be handled with grace. My reach-out was from one artiste to another. On that level I was willing to believe he hadn’t heard my song,” he responds.

On his current work, he says, “I am now composing music for Shamshera, a Ranbir-starrer for Yash Raj films. It’s a dacoit drama directed by Karan Malhotra.”

And speaking on what can be expected from him in 2019, he says, “I am doing the music for American film The Least of These. It’s an Indian story shot in India. After seeing the narrative they decided to record some songs in Hindi for the international market as well. I’ve already recorded the songs. They will be released in February 2019.”