Roar of the tiger

Musician Rabbi Shergill shares a retrospective bond with the capital. 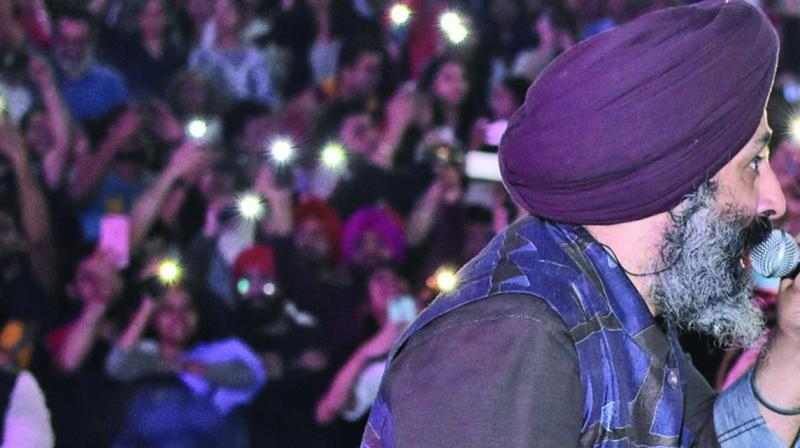 Gurpreet Singh Shergill aka Rabbi Shergill had started as a jingle composer and went on to become an eminent name in the music industry.

Call him the King of Sufi Rock, a pioneer of Delhi's rock music scene, or the face of India's progressive music culture: Rabbi Shergill is truly a legend. He recently visited the capital for a performance and minutes before he set the stage on fire at Musix, DLF CyberHub, he interacted with us, providing a glimpse into his life, the city’s music scene, and his love-hate relationship with his hometown, Delhi.

Gurpreet Singh Shergill aka Rabbi Shergill had started as a jingle composer and went on to become an eminent name in the music industry. He has not only been associated with Punjabi music, but the entire nation (and abroad) recognises his signature voice, tune, and lyrics.

On music and the capital
See, if we look at bands that are purely Delhi-based, there are quite a few that can be named at once. For example, there is Euphoria, Indian Ocean, and artists such as Daler Mehndi, or perhaps me. The music scene has definitely evolved but I wish there was a proper Delhi gharana of rock music. Right now, there is a bunch of everything. Delhiites have energy but they don’t know how to direct it or marshal it. They are — if I may put it in such a way — self-destructive. But there have been great artists here. Narendra Chanchal has lived all his life here. His songs are fantastic. Even if you hear them today, there is something that pierces your soul.  I sincerely hope that the Delhiites fill in the shoes of such great maestros.

On his love for live performances
See, while you are performing live, the artist earnestly hopes that his songs travel to the people. Every night it travels to the people and the people accept it, take it and make it their own is what makes each performance special. I remember we had to close down shows in Jammu and Hyderabad because the police had to come in and stop the show or else the surrounding buildings would collapse (there was so much noise people were making) — these things one can never forget. It gets you going every time you’re up for a performance.

On his constants in life
Other than music, I think it’s my love for travel, and love for conversations with people smarter than me. Everything I am today, I owe it to my conversations with people, either one-to-one or the type that happens between a writer and a reader. Another thing that has shaken me over the years is my memories from my hometown. When I used to live in North Delhi in the 90s, there was much less pollution. There were clear skies, so you could count the stars and howl at the moon. These moments have always stayed with me wherever I go.

On music changing him
Time itself makes you change. But talking about music, it has indeed changed me as a person. Not my own music, but other people’s music has influenced me from time to time. The chances of a film changing your life are very little, whereas the chances for a book to do the same are quite immense. But a good album can change you to a great extent as well. I can think of Bruce Springsteen’s Born to Run, U2’s The Joshua Tree, Rattle and Hum, and Achtung Baby, The End of the Innocence by Don Henley — which have contributed to making me the person I am today.

On Gen Z’s music
Today’s music is not much that has been thought about and then produced. Music is an art form and not only entertainment. So, the problem with today’s music is that it’s commercial, it’s transactive and people have started to use it as currency. The music’s purpose overtakes its form. The purpose of nowadays music is just to make money for the makers. It’s de-spiritualised and de-politicised. That hurts me.

On Sufi Rock vs the audience
I don’t care about what people think of Sufi Rock. I don’t think Bulleh Shah would have any issue with any form. I am not singing to anyone. I am singing to Bulleh Shah, Osho, Baba Farid and those are the only opinions that I care about. When have people known what’s right for them?

On being back in Delhi
I can’t say that I’m thrilled because right now I’m choking like everyone else. The pollution is overbearing. Apart from that, there is a cultural familiarity with the place. I grew up here. This is my city. It’s always nice to be back home.