The Beatles celebrate yet another 50th anniversary

This year marks the 50th anniversary of the Beatles’ self-titled ninth album, since known as the “White Album”. 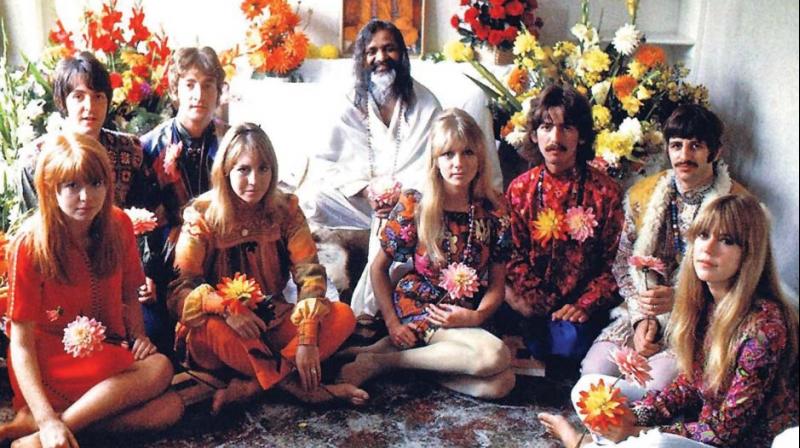 Maharashi Mahesh Yogi and the Beatles with friends at Rishikesh.

On October 18, I listened to several outtakes of George Harrison’s composition for the Beatles, While My Guitar Gently Weeps — namely, the Esher demo (so known as the song, among others, was recorded at Harrison’s bungalow, Kinfauns, in Esher, Surrey), and Take 2 [in which Harrison says: “Yeah, may be you’ll have to give him (John Lennon?) his own mic”] — bringing in a rush of memories from my school days. This was back in 1968, a time when my parents spoke about the Beatles in a hallowed voice about a band whose music was revolutionising the world, especially following their sojourn, earlier that year, to Rishikesh.

Much of the initial songwriting for what was eventually known as the “White Album” (because of its stark colourless cover) was initiated between February and April 1968, when Beatles’ members George Harrison, John Lennon, Paul McCartney and Ringo Starr travelled to India to join a training course at the Maharishi Mahesh Yogi’s Academy of Transcendental Meditation. In a postcard written to Starr, who returned to England prior to the others, Lennon wrote: “We’ve got about two LPs worth of songs now, so get your drums out.”

During the stay, the Beatles were joined by some 60 people, including musicians Donovan and Beach Boys’ Mike Love, and actress Mia Farrow. Expectedly, the duo of Lennon-McCartney wrote the bulk of the 30 tracks that appeared on the original album, but it was also notable for drummer Starr writing his first, Don’t Pass Me By.

This year marks the 50th anniversary of the Beatles’ self-titled ninth album, since known as the “White Album”. To commemorate this milestone, the band’s surviving members released a deluxe reissue of the album on November 9 through their own Apple Corps, in conjunction with Capitol/Universal Music (UMe).

It is certainly an opportunity of revisiting the past, November 1968 to be precise, when millions of copies of the original double album were shipped globally to what was once known as record stores, ahead of that year’s most anticipated music event: the release of “The Beatles” (soon to be better known as the “White Album”). The re-release of the album contains the 30 tracks, newly mixed in stereo and 5.1 surround sound by producer Giles Martin, son of original producer George Martin who passed away in 2016, in addition to 27 early acoustic demos and 50 session takes, most of which are previously unreleased in any form or format.

The music is spread across seven discs, housed in a slip-sleeved 164-page hardbound book, and featuring pull-out reproductions of the original album’s glossy colour portrait photographs of each member, as well new introductions to the album written by McCartney and by Martin, rarely seen photographs, and track-by-track notations. In addition to the seven-disc super deluxe box set, the reissue will also be released as a three-CD deluxe set; a four-LP deluxe vinyl set; a two-LP standard vinyl set; and digitally.

This release arrives as a backdrop to Beatles member and 18-time Grammy  winner McCartney’s solo album launched on September 7, “Egypt Station”, which entered the US album chart at No. 1, making it McCartney’s third non-Beatles/non-Wings effort to top the chart, and his first chart-topper in that country since 1982’s “Tug of War”.

During recording sessions for the “White Album”, Starr actually quit the band for two weeks, resulting in McCartney playing drums on Back in the USSR. (on which Harrison and Lennon also played drums), and on Dear Prudence too. Although the album was perhaps the beginning of the end of the Beatles, for me it is undoubtedly one of their finest efforts, both adventurous and fresh — containing songs that are now global standards such as Back in the USSR; Ob-La-Di, Ob-La-Da; Helter Skelter and Harrison’s While My Guitar Gently Weeps, the latter song featuring the uncredited guitar talent of Eric Clapton. The album’s songs are indeed varied, with the musical styles including straight forward rock’n’roll, rock and Blues.

As a footnote: Did the Beatles ever intend their demos/outtakes to be released? Probably not but, then again, they might not have ever suspected then that they would still remain popular 50 years later. More importantly for me, the Beatles’ music still appears as relevant as ever, and at least some of the bonus material will no doubt hold up to the Beatles “original” catalogue, proving beyond doubt that the content is something worth listening four…ever!