A videsi’s love for desi

Following an impulse, Nash left his friends and family behind to pursue his dream of becoming a student of Indian classical music. 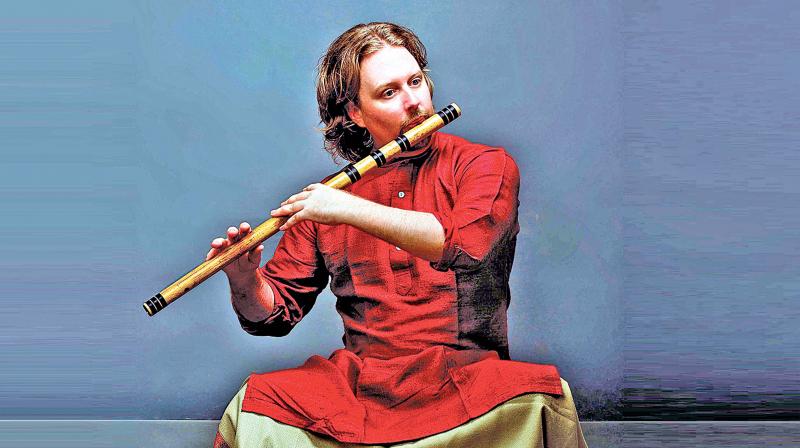 Nash Naubert, a flautist from America, is not only a senior disciple of maestro Pt. Hariprasad Chaurasia, but is also pursuing Indian classical music in India for the past 20 years.

When Seattle–born Nash Naubert first visited India in 1999, he realised his calling in this country. Following an impulse, Nash left his friends and family behind to pursue his dream of becoming a student of Indian classical music. A senior disciple of music maestro Pt Hariprasad Chaurasia, Nash left the audience mesmerised with his flute recital at a morning concert organised by Pancham Nishad in Mumbai recently.

Growing up, Nash was always passionate about the arts, music and literature. He became interested in world music during adolescence and practiced playing the didgeridoo (an indigenous Australian instrument) in college. Since then he learnt vocals and many forms of music, but Indian Classical music intrigued him the most. “It has become more than an obsession, but a religion to me,” says the musician, adding that the innate structure and purpose of Indian Classical music is to uplift the listener and that’s what made him fall in love with this music. “No other classical music in the world is tied to spirituality the way Indian Classical music is,” he claims.

Talking about his journey in India as a musician, Nash distinctly remembers that he had worked very hard in the initial days and still continues, “In fact Panditji used to refer to me as ‘the one who worked hard’ to others,” he recalls. Nash also feels content about his achievements, saying that he has accomplished a lot since he first came to India, “Some might say I am doing the impossible, but there is still a long way to go.”

What sets Nash apart from other expatriates, who have chosen to call Mumbai home, is that he’s a professional bansuri (flute) player. He claims that he is the only American living in Mumbai who is playing at Indian classical concerts. Moreover, the musician has had the privilege of performing alongside great artists like Begum Parveen Sultana, Pt. Anindo Chatterjee, Pt. Vishwa Mohan Bhatt, and Ustad Amjad Ali Khan. “I started in India from scratch, with no network of people and even the art-form that I  have immersed myself into. It was all new to me,” reminisces the artist. He also adds that he never had any support from his family and he stumbled many times, “but I am still standing, Indian classical music is beautiful and amazing.”

While the apprehensions of mixing classical music with Western for an Indian audience is understood, the American flautist will not shy away from the possibility, if presented. “Perhaps, with the right people and the right circumstances I would also love to perform fusion.” However Nash assures that his main passion and focus will always be classical music.

When asked if he finds any difference in terms of audience’s response to classical music concerts in India and abroad, he quickly responds that he likes performing in India the most. “I feel there is a lot of curiosity about Indian classical music abroad but it’s not easy to cultivate an appreciation or basic understanding about this music,” rues the musician. Nash agrees to the fact that Indian Classical music is more successful on an international stage, and Pt. Ravi Shankar’s performances are a testimony to that. And according to him, it’s only a matter of changing one’s perspective and obtaining a basic understanding, “When that is accomplished, we will see Indian classical music thrive on all of the great stages of the world,” he smiles.

Certainly the flautist has come a long way and his journey to reach his destination is a rather long one. Embarking on a new venture in his career, Nash is now launching a music company Music of Now (MoN) at Carnegie Hall in New York. “MoN aims to set up concerts and tours for Indian artists and few other great world music artists in the US where they will be treated like the world class artists that they really are,” he informs as the conversation concludes.