The Hyderabadi Warsis, who trace their lineage to the court of Bahadur Shah Zafar, enthralled the audience of Delhi with their soulful rendition. 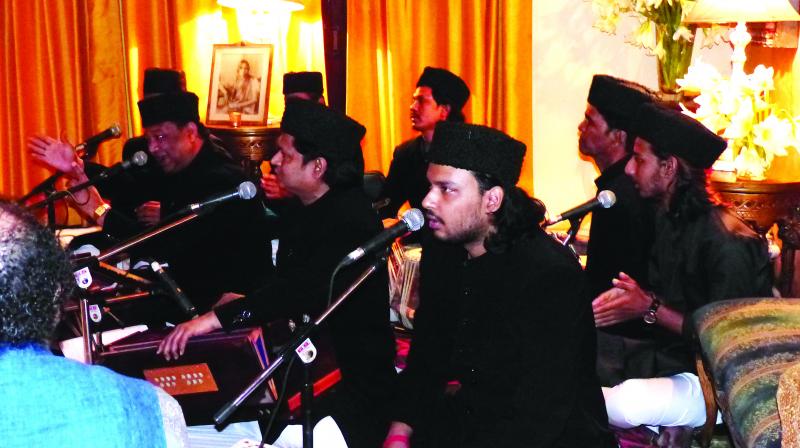 Sangeet Natak Akademi awardees Warsi Brothers, Naseer and Nazeer, with their group from Hyderabad were in Delhi recently. Their traditional renditions were as interesting as a discussion on their origin.

Apparently, the Nizam of Hyderabad had invited their ancestors to his court after 1857, after emperor Bahadur Shah Zafar was exiled by the British to Burma. The family has lived there since and are popularly called the Hyderabadi Warsis.

They were original disciples of Amir Khusrau, called “quawwal bacche”.

Some other court singers from Delhi are known to have migrated to Pakistan and their descendants include quawwals Farid Ayaz, the late Manzoor Niazi, and late Ustad Bahauddin Khan.

It is believed the famous Sabri quawwals from Pakistan were originally from Jhajjar in Haryana, and moved to Pakistan after partition. Ustad Nazeer Warsi the elder of the two brothers shared how periodically give “haazri” (pay visit) at Nizamuddin Auliya’s Dargah whenever they are able, as the “silsila” (lineage) originated from there.

In Punjab, Ustad Mubarak Ali and Ustad Fateh Ali (uncle and father of Nusrat Fateh Ali Khan) represented the singing tradition of Umrao Khan sahib of the “quawwal bacche” tradition. They too left for Pakistan after 1947.

Talking about their life in Hyderabad, Naseer shares “jo yahan maahaul tha Dilli ka, wohi maahaul humare buzurgon ne Hyderabad mein rakha” (Our ancestors maintained the same style of music when they moved to Hyderabad from Delhi). There were many patrons and followers of the Sufism. Nowadays quawwals have changed their style of singing, bringing in other elements, but we sing the traditional pieces wherever people want to hear these.” 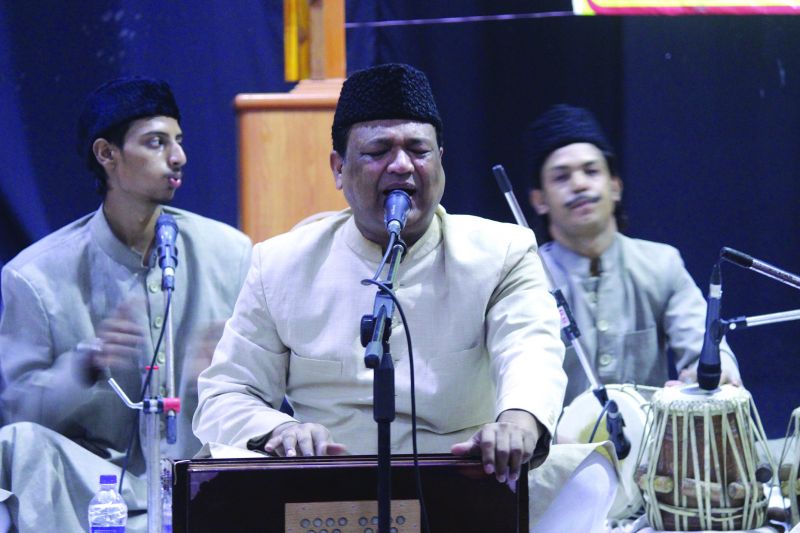 Their grandfather Ustad Aziz Ahmed Warsi was the first and last quawwal to receive a Padmashri award in 1971 and had also sung the popular quawwali “Maula salim chishti” in the 1973 film “Garam Hawa”.

Naseer shares “In our tradition, young singers are not allowed to sing quawwalli unless they have hair on their faces, i.e. post puberty, after the voice has been formed.” He adds, “We don’t eat heavy meals before singing, and even when we have no concert.  We sing late into the night. Usually our breakfast, the first meal is eaten at around 3 or 4 in the afternoon. We practice full throated, as our tradition is to develop reach of voice, so that we can reach an audience of over 200 without amplification.”

The duo sang last week at the residence of Anita Singh, patron of the arts, to a select audience of musicians. Amongst them were Ustad Shujaat Khan, Ustad Wasifuddin Dagar, Pt Rajan Mishra and Ustad Iqbal Ahmed Khan) diplomats including French Ambassador Alexandre Ziegler. They began the concert with Amir Khusrau’s composition “Aale Nabi” in Persian, invoking the Divine, rather than with the more commonly “man qun tau maullah”, saying that this piece was equally appropriate and auspicious to start with. “Mere banne ki baat na pooch gharana” was sung in the 1961 film “Gharana”, by Shamshad Begum and Asha Bhonsle but this too is a traditional composition which the duo sung.

Other popular compositions included, on request “chaap tilak”, “Kabira bhala hua”, “phool rahe sarason”, the Persian “bahaal le miskin na qun taghaful” ,“taaj dare haram”, “ ae ri sakhi, piya ghar nahin” and many more. They ended with the traditional “Aaj Rang hai”, invoking auspiciousness. Their rendering relied heavily on Raga based melody, their “laya” was not only the simple “dadra” or “keherwa” and the coordination of presentation with all the voices singing in unison impressive.

They brought in snatches of other Ragas into each piece they sang, making it intellectually interesting in addition to adding to the aural appeal. The ambience they created, a beautiful blend of pure sound and rhythm was superb. The brothers sang well into the night, after a brief interval, and both their sons, representing the next generation were well taught.