Dedicated to the melody

A gifted child, A. Sooryagayathri juggles her studies, music and travel with an acrobat’s finesse. 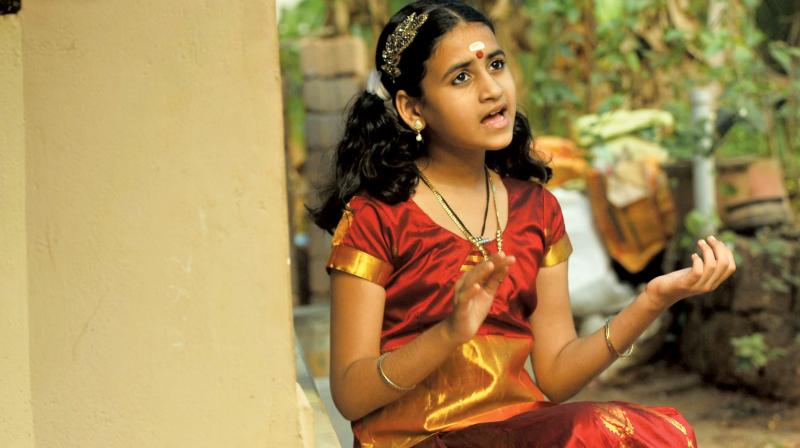 Nothing less than a child prodigy, Sooryagayathri has built herself a following across the country owing to her melodious renditions of devotional songs.

On YouTube, she is nothing short of a sensation. Search for Sooryagayathri and you come across a flawless rendering of a Ganesha bhajan, not one swara or syllable out of place. A figure in seven digits on the bottom right of the screen denotes the number of views the video had earned for the rendition by the little genius. A sixth grader from Kozhikode district in Kerala, the 11-year-old was even younger when accolades came her way for singing devotional songs and albums. It was in 2015 that she first shot to fame through the devotional albums of Kuldeep M. Pai. Her latest, Vishnu Sahasranamam recorded in January, has already garnered over two lakh views.

“I want to be like M.S. Subbulakshmi Amma, and spread my music across the globe,” comes the reply when she is prodded on what she wants to do when she grows up. Kuldeep, who creates his own tunes for traditional bhajans, is a friend of the young singer’s father and records his tunes in his own studio in Chennai. Prior to every YouTube release, he posts a teaser on Facebook.

The girl, clad in a traditional silk skirt and top with her hair parted at the centre, conjures up an image similar to that of the little singer in the Tamil movie Saivam. A gifted child, A. Sooryagayathri juggles her studies, music and travel with an acrobat’s finesse.

Surprisingly, this busy schedule has no impact on her studies. “When I’m away for programmes, my friends write notes for me. My teachers are so helpful in getting my doubts cleared. My mother is there to help me cover lessons I miss in class as well,” says the 11-year-old. Despite her busy schedule, Sooryagayathri’s scorecard has A-grades against all subjects, informs her mother.

Having learned Indian classical music from the age of five, Sooryagayathri is under the tutelage of two teachers in Carnatic vocals. She does a lot of homework when she has to sing songs in languages other than her mother tongue. She finds out about the audience’s taste before selecting the songs. For instance, the North Indian audience loves bhajans in Hindi and Sanskrit while South Indians prefer songs in their languages.

There were rumours that the young prodigy was the late legend MS Subbulakshmi’s grandchild. “It happened when her Hanuman Chalisa went viral. Somehow her style of presentation invited such a comparison,” says her mother. Perhaps also because she received the M.S. Subbulakshmi Fellowship for music and shows an unusual wealth of talent.