Playback singer Tulsi Kumar gets candid about the songs she likes to sing and what she is working on next. 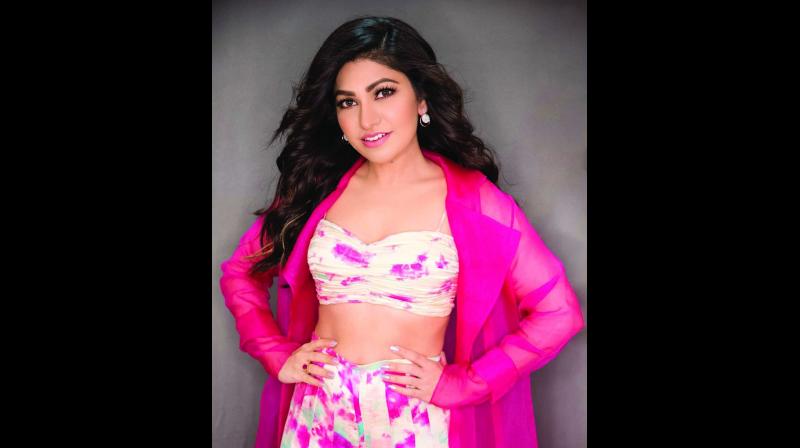 In circa 2006, she wafted her way into the film music industry. Tulsi Kumar was known just as music company and film production company T-Series’ Big Cheese Bhushan Kumar’s sister and late music mogul Gulshan Kumar’s 19-year-old daughter who wanted to be a singer.

But this student of the yesteryears’ star singer Suresh Wadkar’s Ajivasan Music Academy has worked hard in learning the ropes of singing from the mellifluous musician and has now come a long way with umpteen hit songs in the past 14 years. The singer who normally prefers to keep a low profile, has just given another whopping hit called Lagdi Lahore Di along with singer Guru Randhawa for the film Street Dancer 3D. Tell her how much we love it and she goes red in the face. “Thank you so much,” she exclaims. “Yes, it has done well. But it is not just my effort. The team put in such a great song and Guru and I have done well in the past as well,” she avers.

Incidentally, a lot of songs playbacked by Tulsi have a distinct Punjabi flavour to it. But then despite being a Punjabi, the singer says that Punjabi doesn’t come to her easily. “I am a Punjabi, but I have been in Mumbai. So I have to really work hard on my Punjabi intonations and expression for the lyrics. There are a lot of talented Punjabi singers in Bollywood and we are also using a lot of Punjabi songs and reprise versions of these songs in our films and I have also sung quite a few of them. But then, I have also sung a lot of songs, that do not have Punjabi in it,” she adds.

Of course, she also has some soul stirring songs like Soch Na Sake from Airlift, Wajah Tum Ho, Saanso Ne from Dabangg 2 and Kuch Toh Hua Hai from Singham Returns among her melodies.

Meanwhile, Tulsi has another speciality up her sleeve – reprised or recreated versions – ones that use to be billed as remixes earlier. Tulsi’s voice does have the old-world charm and she thinks that her composers have a similar opinion. “Yes, we are using a lot of songs from the 90s and perhaps my composers think that my voice is fit which is why I have sung so many of them – Akhiyon Se Goli Maare, Shaher Ki Ladki, O Saki Saki which have gone on to do very well. Actually, I also do a lot of cover versions of old songs and that is another reason as well,” she explains. We can count Mainu Ishq Da Lagya Rog, Gulaabi Aankhen from Noor, Haiya Ho Haiya from Marvjaavan as well. She also done the female version of the Nusrat Fateh Ali Khan sung Mere Rashke Qamar in her long song list though she sings rather limited songs.

The 33-year-old is also the mother of two-year-old Shivaay Ralhan, having married Delhi based Hitesh Ralhan a few years ago and she spends half the time shuttling between the capital and the city of dreams.

“Shivaay usually travels with me to and fro and he always responds to my voice when he hears it anywhere. He knows that it is me singing. But his favourite song nowadays is Bala – even though I have not sung it,” she smiles.

So, it is a planned move, not to sing beyond the T-Series banner run by her brother Bhushan Kumar now? “When we record the songs, the music company is not often decided. The music company comes in later. But then there are a couple of songs that are coming up. Hopefully you will hear an announcement very soon,” says the soft-spoken vocalist.