Musical fest by Legends of India lights up Sunday

The youngest member of the Maihar Seniya Gharana lit up the Sunday morning with his Fluid, gentle & deeply inspiring performance. 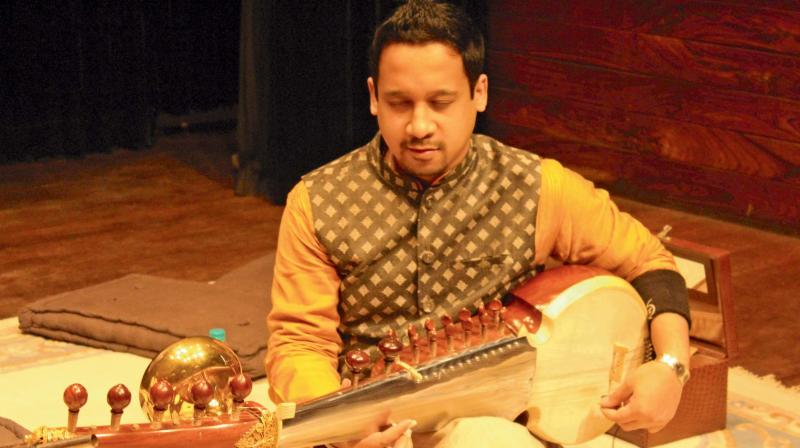 New Delhi: Sunday morning performances in Delhi were introduced by Legends Of India though many organisations, including Sangeet Natak Akademi has followed suit.

After a mesmerizing performance by Uday Bhawalkar last week, Shiraz Ali Khan, carrying forward the legacy of his grandfather Baba Allaudin Khan, was in his form this morning.

The youngest member of the Maihar Seniya Gharana lit up the Sunday morning with his Fluid, gentle & deeply inspiring performance.

Shiraz has  studied under the guidance of his father Dhyanesh Khan and his aunt Ameena Perera in the Beenkar and Rababiya Anga styles bearing the Dhrupad form of his gharana. Presently, Shiraz is performing live with his Guru Ustad Aashish Khan world wide

Shiraz was accompanied by Sourabh Goho, a young talent from Kolkata creating vibration across the country. The duo bowled the audience with the rendition of Raga Bilaskhani Todi (Alap/Jod/Jhala) followed by Vilambit Gat in Teentaal). The Raga was created by Mian Tansen’s son Bilas Khan.

Next, he performed a Rajasthani Folk tune Kesariya Balam in Raga Mishra Mand and ended his performance with Mishra Bhairavi. The Founder Chairman of Legends of India and curator of Morning Ragas, Dipayan Mazumdar said, “Taking initiative is not difficult but implementing ideas for taking those initiatives on high elevation takes a lot of hard work.”

Last Sunday, India’s leading dhrupad singer Uday Bhawalkar had started his performance with delightful Vibhas. His singing was fluid, gentle, and deeply inspiring.  He studied under Ustad Fariduddin Dagar at Bhopal, and then with Ustad Mohiuddin Dagar in Mumbai, but despite the strong Dagar influence in his singing, he has clearly developed his own personal style. Uday Bhawalkar lives in Pune, where he teaches students from all over the country in a traditional manner.