Entertainment   Music  20 Aug 2018  The music of the monsoons: The Malhars
Entertainment, Music

The music of the monsoons: The Malhars

Megh is one of the six primordial Ragas in the Northern classical music tradition. 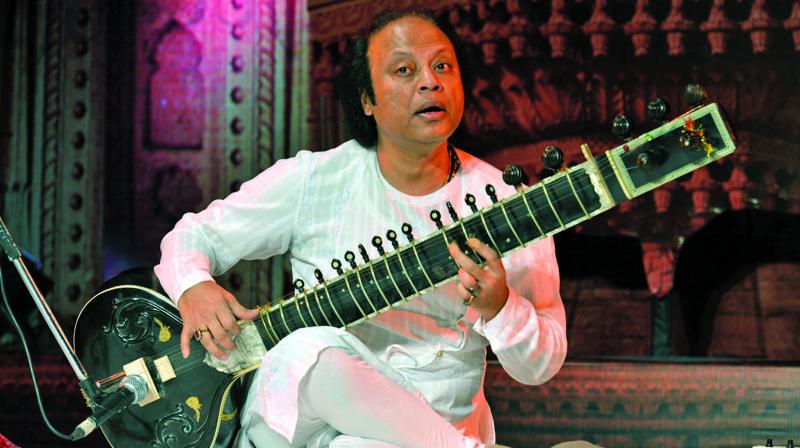 The onset of the rain is always accompanied by the rendering of the various Malhars in North India. Just like it is traditional to present Basant in Spring, in the monsoons, it usual to present Malhars. Raga Malhar today has various forms – the versions across the centuries attributed to Saint musicians like Surdas, Ramdas and Meera Bai (Sur Malhar, Ramdasi Malhar, Meera ki Malhar), musicians like Nayak Charju (Charju Malhar) recently Pt Kumar Gandharva (Gandhi Malhar) or the versions created  by joining other Ragas with Malhar (Jayant Malhar, Des Malhar, Anand Malhar, Nat Malhar, Gaud Malhar, Megh Malhar).

Megh is one of the six primordial Ragas in the Northern classical music tradition. Tansen amended the form of Malhar that existed, which we now know as Mian ki Malhar and it is believed it is this Malhar, when rendered with emotion and exactitude, brings rain.

To celebrate the monsoon with music, as part of its monthly “Purnima” series of concerts, IGNCA is presenting a sitar recital by Ustad Nishat Khan on August 30th at IGNCA auditorium at 6pm. The series  had started on Buddha Purnima in April with a recital celebrating the teachings of The Buddha by Vidushi Bombay Jayashri and her students.

This had been followed by a vocal recital in May focusing on the compositions of Kunwar Shyam and other musician poets like Raja Sir Dalit Singh on prose devoted to Lord Krishna.

In June was a North South classical music jugalbandi by Pt Ronu Mazumdar and Vidushi Jayanthi Kumaresh rendering Ragas that existed before the changes in Ragas each system brought in. In July, the Purnima concert was a chronological presentation of compositions in the same Ragas by 5 generations of Ustads of the Senia Shahjahanpur gharana, by instrumentalists Pt Debashish Bhattacharya, Pt Sugato Nag, Pt Prattyush Banerji, Smarajit Kumar Sen and Debasmita Bhattacharya (all students of Padma Bhushan Pt Buddhadev Dasgupta). August’s concert focuses on the Music of the Monsoons – the Malhars.

Talking to Ustad Nishat Khan ahead of his concert, his devotion to his gharana’s music was apparent. He said “I love all the Malhars, every Malhar has its own emotion and beauty. Right at the top, for me, would be Mian Malhar; the play of the two “ni’s lend themseves to show one’s artistry; although there are rules of usage, the mood one can convey is both romantic and nostalgic. There is a quiet deep strength in this Raga. The iconic Mian Malhar album of my late uncle Ustad Vilayat Khan sahib on sitar and my father Ustad Imrat Khan on the surbahar, recorded in the mid 1960s, comes to mind. I would ask my grandmother to put the record on, I would hear it every day. My grandmother and I would listen to it together, analyse it. Of course other great recordings come to mind – Ustad Amir Khan, (his “phupha”, uncle), my father’s hour and a half aalap jor jhala in Malhar, Ustad Bundu Khan, Ustad Faiyaz Khan.

I feel Mian Malhar lends its self to wide expansion in the aalap and jor. My father once told me the story of a Mian Malhar concert – he had finished playing, and after him the great duo of Ustads Salamat Ali Nazakat Ali started Mian Malhar. My father said he went home, had dinner, and went back to hear the end of the concert, and the duo were still singing aalap!!! ”

Ustad Nishat Khan continued his thoughts on the Malhars “in 1993 I recorded Gaud Malhar for a series by India Today called Young Masters. I feel Gaud Malhar is an intellectual Raga as it is between so many Ragas. You make one wrong movement and it conveys something else. Agra gharana ke logon ne ye Raga bahut gaaya hai; (exponents of the Agra gharana have sung this Raga a lot); my own gharana handles it differently. I feel it’s a very sweet Raga, there is an innocence about it too. I actually love playing Gaud Malhar. My father has played a lot of Megh Malhar too.

Personally I do believe the Malhars were created for the rains; they do bring rains; there is a spiritual quality in the notes. It has rained when I played Malhar and the skies were clear; I’m not bragging, it’s the truth.

I actually wait for the monsoons so that I can present Malhars; I love playing them. I would say my Malhar is like a woven intricately embroidered shawl; each little subtle detail adds to the overall picture, each colour or nuance I add is necessary to complete the final piece or production. I am excited about this concert at IGNCA on 30th August.”