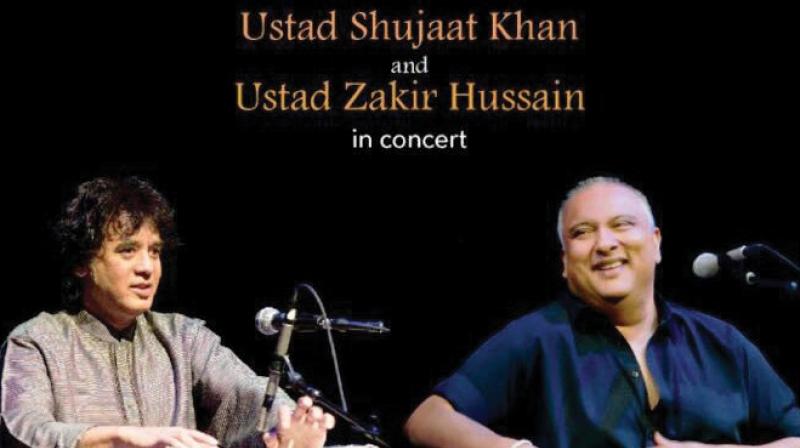 The audience had lined-up outside Delhi’s Sir Shankar Lal Hall in Modern School from 4 pm itself for Ustad Shujaat Khan and Ustad Zakir Hussain’s performance.

The Ustad Vilayat Khan Foundation, founded after the death of perhaps the greatest sitar player of our times, Aftab-e-Sitar Ustad Vilayat Khan, presented a superlative jugalbandi last week at Delhi’s Sir Shankar Lal Hall in Modern School. It is not usual to refer to a concert featuring an instrument and his percussion accompaniment as a jugalbandi (duet), but this concert was just that, with equal participation by the superb Ustad Zakir Hussain Khan, undoubtedly the finest tabla player in the world today.

As Zakir Hussain said, before the concert, “Ustad Vilayat Khan was one of my mentors”. Illustrating the close bonds between their families, he recounted an incident of Ustad Vilayat Khan presenting him with a miniature tabla set to hang from his crib.

The unprecedented crowds were a testimony to the enormous popularity of the duo – the entire hall, which accommodated more than 3,500 people, was absolutely jam packed as early as 6.15 pm, though the concert was to start at 7 pm.

There were lines outside even at 4 pm. The stage was covered with fans – what was so heartening was to see so many young faces in the crowds. Arrangements had been made outside in the basketball field with a huge screen and chairs as well as a baithak style seating on the floor, but even this proved woefully inadequate to the crowds that surged in, even after the concert started at 7 pm.

Ustad Shujaat Khan has very successfully carved out a place in the hearts of music lovers, especially in his hometown of Delhi. With a father like Ustad Vilayat Khan and constant comparisons about the differences in playing, Shujaat has had to create an identity of his own, relying not only on his musical heritage of more than 5 generations in an unbroken line, belonging to the premier sitar playing gharana in India which refined not just the instrument but also the techniques of playing it – authentic Sitar baaj (style) today undoubtedly rests with this gharana.

His refined sensitivity, delicate touch on the sitar, and immense creativity have resulted in the creation of a performance that is definitely not a mere copy of his legendary father. This was undoubtedly one of his best concerts recently, which he played with great passion and abandoned.

Ustad Zakir Hussain is such a superb performer that sometimes one tends to forget the huge lineage and knowledge that preceded him. His tabla today is not just the baaj of the Punjab gharana in which he was groomed but has absorbed techniques not only from the other tabla gharanas but also from other percussion instruments worldwide. His extraordinary career has exposed him to the type of interactions musically that have enriched his music, and created in him an unparalleled performer-performer.

As he himself has said earlier, others trained by his father have as much knowledge, what separates him from the rest is his own presentation and musical thought process. His sangat (accompaniment) is always so spectacular; it prompted a connoisseur to say “sangeet wahan (on the sitar) bhi ho raha hai, aur yahan bhi” (on the tabla).