Chuck was among the first musicians to be inducted into the Rock and Roll Hall of Fame on its opening in 1986. 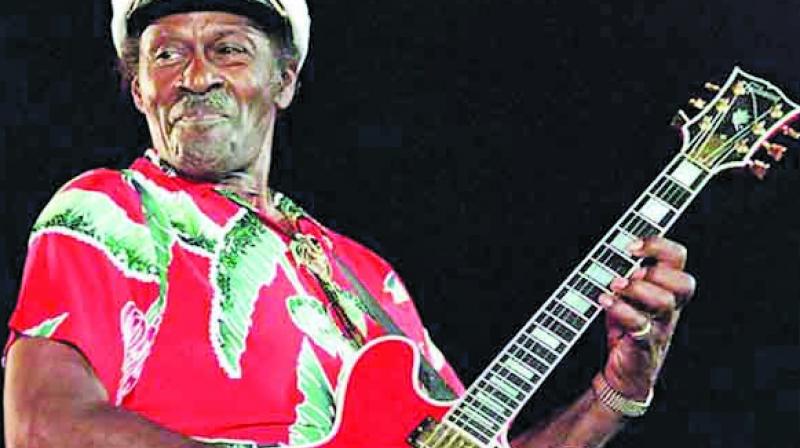 Chuck Berry at a live performance.

When the history of rock ‘n’ roll is written (yet, again), it is unfortunately based on those musicians that have passed away, rather than those that are alive. But I decided to support those who live when, in 2014, I was invited to video record my comments for the preview of “Gibson Through The Lens” — a photographic exhibition organised by guitar manufacturer Gibson on those legends that have utilised their instruments — and chose Chuck Berry.

What I did not know then is that, three years down the line, the artiste who was believed to be in retirement, would announce the release of a new album, his first in 38 years, simply called Chuck. However, decades prior to that, I was listening to Chuck’s compositions, not even remotely being aware of his existence then, and his influence on music history.

Like most youngsters in the ’70s, one of the earlier influences while listening to international music was undoubtedly The Beatles. It all commenced by my listening to their compilations, before moving in inverse into appreciating their stand-alone albums that were released prior to the compilations. Rock N Roll Music — released in 1976 — was one such compilation, a double-vinyl disc which I purchased from the now defunct Rhythm House in Mumbai, that still remains part of my collection. The name of the album itself was a Chuck Berry original composition, a fact that I captured years later, as also another track, Roll Over Beethoven, which also appeared on the aforesaid compilation. In fact, so-called Beatles rival band Rolling Stones’ debut song, Come On, which was released in 1963, reaching no. 21 on the U.K. singles chart, also happened to be a Chuck original. With a pedigree like that, there was little doubt about Chuck Berry’s credentials as a rock and roll great.

Chuck’s lucky break in the recording industry occurred when he travelled to Chicago in May 1955 and met blues guitarist Muddy Waters, who suggested that Chuck contact Leonard Chess who had, by then, set up his own record label, Chess Records. In fact, the genesis/popularity of the company was superbly encapsulated in a 2008 musical biopic, written and directed by Darnell Martin, as Cadillac Records. The film explores the musical era from the early 1940s to the late 1960s, chronicling the life of the influential Chicago-based record company, and a few key musicians who recorded for Chess Records.

For those interested, the film, released in 2008, stars Mos Def as Chuck Berry, Adrien Brody as Leonard Chess, and Jeffrey Wright as Muddy Waters. With Chess Records, Chuck recorded Maybellene— his adaptation of country song Ida Red — which went onto sell over a million units, reaching no.1 on Billboard magazine’s Rhythm and Blues chart.

But nothing changes the fact that, during his teens, Chuck had been playing blues, borrowing both his guitar riffs and showmanship techniques from fellow blues musician T-Bone Walker. While Walker passed away in 1975 and so, too, most of the blues legends by then, their legacy lives on with the annual Mahindra Blues Festival, which is scheduled to be held next year, on February 11 and 12, at Mumbai’s Mehboob Studios.

Meanwhile, returning to Chuck Berry’s forthcoming album, Chuck, it features family members Charles Berry Jr (on guitar), and Ingrid Berry (on harmonica), who are provided an opportunity of showcasing their respective talent on an album that will be father Chuck’s first one since 1979’s Rock It, and will contain new songs, all written, and produced by Chuck himself.

Chuck was among the first musicians to be inducted into the Rock and Roll Hall of Fame on its opening in 1986, cited for having “laid the groundwork for not only a rock and roll sound, but a rock and roll stance”.

May Chuck Berry and the Mahindra Festivals ensure that the roots of Blues survive forever!

The writer has been part of the media and entertainment business for over 23 years. He still continues to pursue his hobby, and earns an income out of it.