Entertainment   Music  19 May 2018  For the love of rock and electronic music
Entertainment, Music

For the love of rock and electronic music

The Yellow Diary brings a mix of electronic and rock music portraying their versatility in composition of songs and imagination. 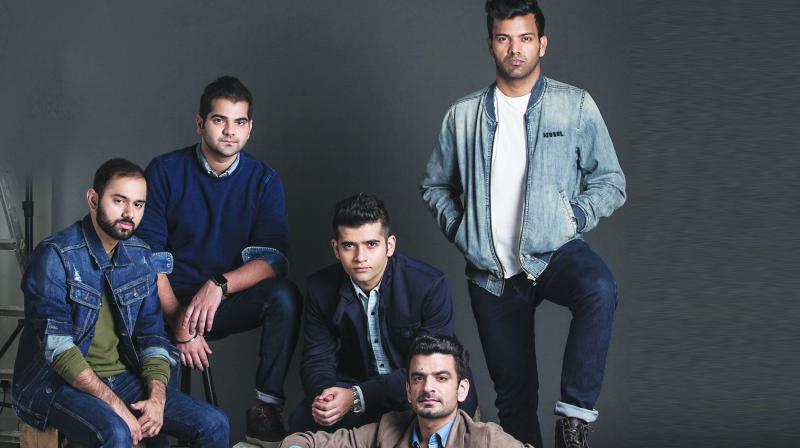 A versatile band, The Yellow Dairy  just released a new song ‘Marz’ and it managed to cross more than 3.5 million views, on Youtube, in a day. The video is a soul stirring short story that blends perfectly with the lyrics of the single. Featuring this five member band, the video was shot over two days in Dehradun by director Maanavi Bedi, with the production house Sisyphus Rocks Films. We talk to the band about their success, upcoming performance and future endeavours.

Talking about the name, Rajan Batra, the lead vocalist says, “We write in a dear diary format, whatever you go through in the day, expressions, emotions, the ideas you have in your mind etc. So when we go back home, it comes out in terms of music. That’s what gave us the idea of calling it “The Yellow Diary”. Yellow as a word has varied meanings — it can be portrayed as sunshine or as a sickness of some kind. So there is happiness and sadness involved in the colour yellow.”

In October 2017, the band was signed by Sony Music India and released their debut EP “Marz” with three songs “Afzai”, “Kashmir” and the re-released version of “Marz”.

Talking about their preferred genre, he says, “It’s not purely a rock band, though there is a strong undertone of rock. There is a huge component of electronic music and honestly we don’t try to do a song with a pre-conceived notion. Whatever the subject, we try to do justice to it and sometimes it translates better in the rock format or an electronic format. Wherever the song takes us we go there, so it’s a mix of genres I would say. ‘Marz’ basically is the dilemma of the mind and the heart. Sometimes this dilemma becomes an obsession.”

Their music producer, Himanshu Parikh, who plays the keyboard as well says, “Rajan and I met because he wanted to get a track produced. He showed me ‘Marz’ and I produced a draft and he really loved it. We have different styles, mine is more on the western side, a bit of rock as well, while his is really raw and folkish. Then we called Vaibhav Pani and sent him ‘Marz’, he said he would love to play guitars for this. It was magical, and we decided to take it from a studio project to a live project. Then Sahil joined, who is the drummer of the band. He also knew the perfect guy to play bass and he introduced us to Stuart who floored us with his bass playing. We soon decided to do this forever – the five of us.”

Vaibhav Pani, the guitarist says, “The first time I heard ‘Marz’, I said that I’m on board and let’s figure out when to record the guitars. It was a very collaborative process in terms of giving the song the sound it deserved. That is our approach to every song.”

Adding to the conversation, Stuart DaCosta, the band’s bass player says, “We play for the whole world. There is no fixed target audience. My mum, who is a senior citizen, really loves it. Even my cousin from school, who is just finishing school, loves it. So we can say it is for all age groups. Different people relate to different parts of the music and the song. Our songs are enjoyed by all age groups.”

Sahil Shah, who is the drummer, says, “Our future plans are to play for as many people possible. We want our music to be heard by everyone. More than just music, one should follow their passion. Art is not considered a lucrative profession. Some people drop their passion and it becomes a hobby. I feel it’s never too late to follow your passion,” he signs off.