Mesmerised by an officer & musician trained in Hindustani classical 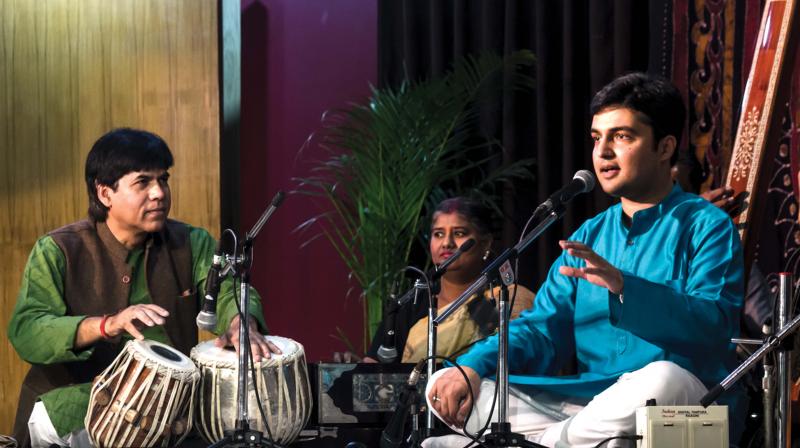 How did he manage studies and riyaz, and now IAS and riyaz?

A music lover may have witnessed this scene: To enjoy music, you reach a bit early and see a performer with the team doing a sound-check. But on this cold winter December morning of Dilli seeing this handsome man doing it religiously for not less than 40 minutes (add the time before my entry) for his and the instruments, in the warm wooden atmosphere of IGNCA’s auditorium, was pleasing. At least the listener in me — who continuously prays for the music to be good, when about to listen to a new voice — was seeing someone who is serious about his music.

Taking an extra second, Kashish Mittal starts singing the Alap — Nom Tom — a speciality of the Agra gharana, followed by “mere rab saayin” in vilambit (slow) Ektala, “Karam ki Nazar raakh” in drut Ektala and finishing it with a fantastic tapa, “Jaaniya Ve” in Nat Bhairav. Hitting the right chord, grabbing all my attention: To remain for almost the next two hours with Kashish, a student of Pt Yashpal — learning from him in traditional guru-shishya parampara. The overall balance he has is proof of the advantages of the parampara. I got to know later that he joined the Indian Administrative Service in 2011 when he was 21, and is a B. Tech from IIT Delhi. You may start wondering what he is made of, but before that, listen to him singing, so that you can wonder with your jaws open.

Accompanied by Mithlesh Jha on tabla, Paromita Mukherji on harmonium, Pt Bharat Bhushan Goswami on sarangi and Chander Pal and Jagdish on tanpuras, his next performance was in raga Shudh Sarang, “Tero hi gun gaaun” in vilambit, followed by “Ghar jaane de re” in drut, finishing with a beautiful Tarana. His last performance of the morning was “Krishna Chandra Nanda Nandan” a devotional composition. The audience at the IGNCA was definitely happy, and they kept praising him and he kept blushing.

Born in Barnala (Punjab) to Sangeeta Mittal and Jagdish Kumar, both classical music lovers. His father, a cop, an IPS officer, got transferred to Chandigarh and there at the age of eight he started learning Hindustani classical music from Professor Harvinder Singh and gave his first performance at the age of eleven. He will learn from him, singing for one to two hours daily, who eventually will take him to his guru Pt Yashpal. How did he manage studies and riyaz, IIT and riyaz and now with and as an IAS and riyaz? He said, “I realised during my studies that music is not disturbing my concentration, instead it is complementing my studies (and now services). When I want to take a break, I’ll go to music.” This is thanks to guru Pt Yashpal, who gave him freedom to do his riyaz, whatever time of the day he could, not limiting him to an early morning strict schedule.

When I expressed my desire to listen to him singing Ustad Rashid Khan’s “Yaad Piya ki Aaye”, to all those pleased in the Indira Gandhi National Centre for the Arts, Kashish invited us, music lovers, to Jashn-e-Rekhta, where he will be performing on December 15th at 11 am.

Bharat S. Tiwari is an interior designer with a passion for photography and Hindustani literature & culture.