Singer T.M. Krishna isn’t one to shy away from taking a stand, no matter how controversial it is. 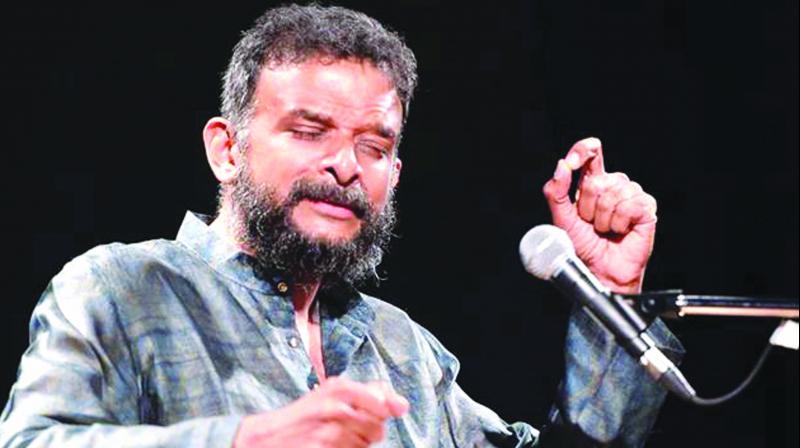 T.M. Krishna, for many, is one of the finest Carnatic musicians of the country. For some others, he is a rebel. And then there are other tags ranging from revolutionary to attention-seeker, but none of those bother him because he believes in speaking his mind.

Ask him why he speaks more than he sings, Krishna quips, “I speak only because I sing. What is beautiful in art if the experience of art does not move me and make me ask difficult questions about myself, my identity, community and society. When art shows you a mirror, you need to recognise it and ask questions. If you won't, there might be pleasure, but no meaning in art.”

Questions keep him going. Self-interrogation through music changed him — his music, life and art. That's when he took his performances out of comfort zones to slums, to the church, commenting that Carnatic music is caged by caste. Many raised their brows, but Krishna gracefully shrugs it off. “I’m not surprised by the difference of opinion in the Carnatic musician community and at some level, I understand why my discourse is problematic and disturbing for them. It's not easy when one person suddenly blows it out. Even for me, it wouldn't have been easy 20 years ago.”

The outspoken singer has always been vocal about politics and resistance movements. Continuing the previous year's streak from bringing out a music video titled Chennai Poramboke Paadal to performing a jugalbandi with the Jogappas, a transgender community of musicians, Krishna has recently been part of Kodaikanal Still Won’t, a music video snubbing the environmental racism by multinational firm Unilever, which fails to address mercury poisoning in Kodaikanal.

His state Tamil Nadu, Krishna says, is probably the worst place to be in. “People there haven’t realised it for long that the state has been a mess due to the undemocratic regime for the past 10-15 years. Now, the corporate-government nexus is becoming obvious, despite Tamil Nadu ironically witnessing a large number of public protests in Neduvasal, Koodankulam, Tuticorin, etc. Arbitrary arrests are happening — even cartoonists and folk singers aren’t left alone,” says the musician, who was in Kochi recently as part of a conference where he spoke and performed.

Caste-based politics has been marring Tamil Nadu for long. Will the entry of superstars Kamal Haasan and Rajinikanth bring about a change? “Honestly, no. Until now, neither of them has openly discussed caste. While Rajinikanth hides behind the veil of so-called spirituality so that he doesn’t have to discuss caste, Kamal Haasan, through an atheist, doesn’t see caste as his caste privilege stays with him. He says he will create a casteless society, but caste is something that should be a constant conversation and debate. Ignoring it won’t make it disappear,” says the Ramon Magsaysay award-winning musician, who too knows that he has the Brahmin privilege, but is conscious that it can’t be ignored. He says, “It’s the same with gender too. Multiple sexualities need to be a continuous debate.”

In the wake of the Section 377 case, on decriminalising homosexuality, he is very hopeful of victory. “I'm sure the case will be won. It’s high time we talk about multiple sexualities. The Section will go, but will society’s attitude change easily? That’s where change needs to happen,” he says, adding that the root of all caste and gender issues lies is patriarchy.

Speaking of gender disparity issues, he hails the latest MeToo movement in Hollywood and the formation of Women in Cinema Collective in Malayalam film industry. “I’m glad that these things are part of the conversation now. It's a great step forward. Nobody would have dared to do this 20 years ago. The problem is we don’t see the nuances of discrimination or realise it. When a man and woman are at a bar or a restaurant, it’s always the man who is given the menu. It’s not a conscious act; but the discrimination needs to be realised and accepted,” he feels.

Coming to politics of religion, Krishna says that religious polarisation happens only because we let it happen. “We allowed our society to degenerate to this level. We can’t keep saying it’s all because of the BJP or the RSS. It’s because we let them do it.”

For that, Krishna pitches for a cultural revolution. “Create multiple cultural habits across the states; we can address gender and religious issues through art and conversations. Let’s fight the RSS using their own game. Form cultural organisations in schools, colleges, villages, towns and at all grassroots levels so that no one is murdered 40 years from now. By cultural organisations, I don’t mean party politics. Spread knowledge as part of cultural upbringing. Being part of a secular country, each one of us should be responsible to make sure the idea of secularism is conveyed to each child through upbringing. What we construct like that matters; civic textbooks are a waste,” he says.

The counter movement is not easy, Krishna admits. “It’s high time we take the lead. It might take three or four generations. Learn from the RSS. They worked for 60 years to get where they are today. It wasn't an overnight phenomenon. Let’s be smart and resist through art.”