Entertainment   Music  18 Jul 2017  A golden voice with a heart of gold
Entertainment, Music

A golden voice with a heart of gold 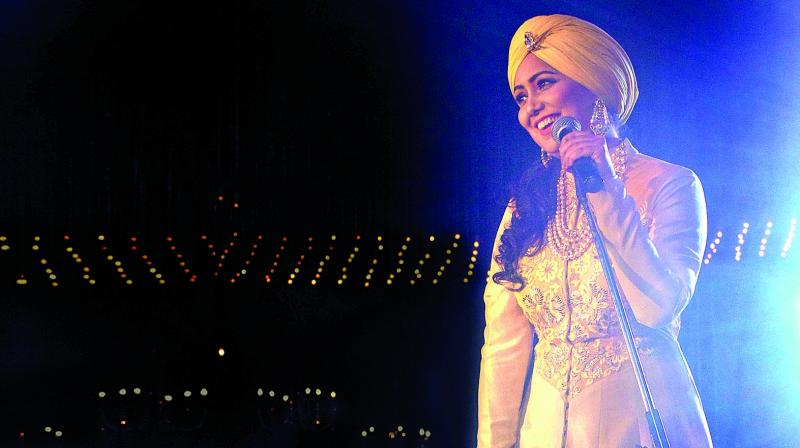 There was no dramatic calling for singer Harshdeep Kaur. Music came into her life through her father, Savinder Singh, who had a band in Delhi, and later on opened a factory of musical instruments. “I grew up with these musical instruments lying around the house — a piano there, a drum kit there. My sister and I would often fool around with these while we were growing up,” recalls Harshdeep.

The playback singer shot to fame when she lent her voice to Ik Onkar for Rang De Basanti. “I felt nice to get appreciation from people,” she says humbly. In fact, her father still has that song as his caller tune. “When people call him, they ask him not to answer the call. They want to listen to the song,” she laughs.

She started learning Indian classical music at the age of six from Tejpal Singh, popularly known as the Singh Brothers, and Western classical music from George Pullinkala, Delhi Music Theatre. At the age of twelve, she joined the Delhi School Of Music and learnt to play the piano.

Katiya Karun from Rockstar, Heer from Jab Tak Hai Jaan, Zaalima from Raees, Nachde Ne Saare from Baar Baar Dekho, Bari Barsi from Band Baaja Baaraat, Kabira from Yeh Jawani Hai Deewani are some songs that catapulted her to fame, but it’s not only her voice but her face that her fans recognise often.

“It feels nice to be recognised for your work. There are fans who follow me on social media and they come and greet me whenever I am out with my family or friends. But when I am not recognised, it helps me stay myself, I can do whatever I want,” says Harshdeep.

She featured in all three seasons of MTV Coke Studio and has even headlined prestigious festivals such as Southbank Centre Music Festival in UK, Mosaic Festival in Canada and  very recently the Manchester International Festival in UK.

But as an artiste, she feels she is yet to accomplish a lot more and with every new project she tries to push the envelope. “Otherwise, if I stick to only my strength, it wouldn’t be exciting anymore. I am into this because I love music. And I don’t let my achievements go to the head. It’s been a great journey so far, but I would like to work on my weaknesses and I know there is still room for improvement,” he says.

On July 22, the singer will be launching a single. “This will be a very authentic Punjabi song, right from the roots,” she says who has till date has sung in languages from Odiya to Bengali to even Tamil and Telegu. “Today it’s much easier to listen to music with platforms like YouTube. Music can transcend language barriers and can unite people across borders,” she concludes.