It’s quite impossible to get these guys away from their lifeline— music. Cycle Chain as a band aims to give you only the best quality of rock music. 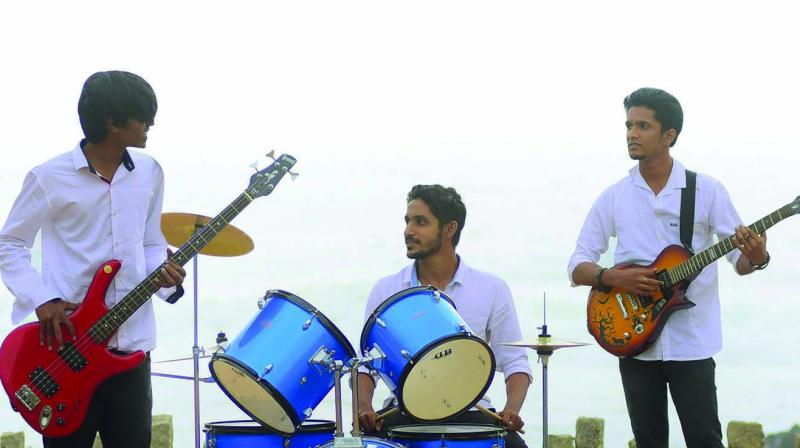 With their debut release tentatively due in August, the band seems to be excited and yet composed.

They say too much of anything is bad! But, with this band too much is only the beginning. These metal heads breathe, eat and live for music and they call themselves Cycle Chain! Wondering why? Here’s what they say, “We contemplated on several names from simple ones to the most sophisticated ones. But, we finally stuck to ‘Cycle Chain’ because we wanted the band to have a fusion of both simple and a sophisticated vibe.” With their debut release tentatively due in August, the band seems to be excited and yet composed.

When a group of like-minded people blend, the outcome is always phenomenal. Shaheer S Shahabudeen, bassist and backing vocals for the vband shares their inception, “We were a group of college mates who jammed to rock music. We wanted to take this friendship to the next level and so we formed a band with the desire to curate the best rock music.”

Speaking about what makes them stand out from the rest he adds, “We technically don’t like the idea of modern rock/modern progressive rock bands, especially the fact that technology overtook music and it is all machine generated music.  We want to sound original exactly like what we are practicing or writing.”

Giving us a sneak peak about what to expect in their debut album, Vamsi M Nath, guitarist and backing vocals says, “This album is about freedom. Our first track is called Mutiny.  This song is about the non-acceptance of rock music by our society and the fact that we are succumbing to the discouragement around. The other songs based on each of the member’s real life experiences. The album is going to be self released and all the technical work will be handled by the band itself. We promote self learners by using our skills. So we are excited for this album. Three tracks are already recorded.”

Addressing their Austrian connect Shaheer says, “Our lead vocalist Boris from Austria, we use online Skype jamming sessions to collaborate. We have already jammed with him on the song Universal Love exchanging the musical culture together. It was great for us when we fused two different forms of music into one. Boris will be coming to India again to record our album. We also have a Europe tour planned with him. We look forward to the good times raining in.”

When asked about the challenges they faced, Mufeed J on the drums says, “Maintaining a band and keeping it going is difficult because we do not have a stable financial back-up.Getting members to stick to the band is a difficult task sometimes due to differences of opinions. Acceptance for rock music and reach in our country is another challenge all bands facing now. We are happy with what we are doing right now, challenges aren’t even a big deal, we do music and we are happy, irrespective of the fact that we become famous or not.”