Fusion on her mind

While the apprehensions of mixing Sufi and Blues for an Indian audience is understood, the British-Indian singer is uninhibited. 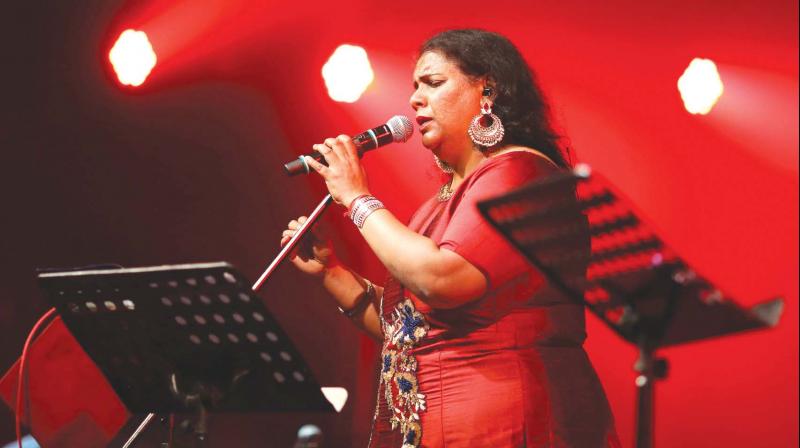 British-Indian singer and composer, Deepa Nair Rasiya is increasingly recognised as a pioneering musician with a soul-stirring vocal style. Her South Indian upbringing coupled with her training in western and classical music has shaped her into an emphatically unique musician in the UK. The versatile singer is in India along with her band, who are currently unwinding by the beach in Goa, to celebrate their successful Sufi-Blues fusion performance in Mumbai last week.

It was at the age of seven that Deepa resolved to take up music as a career after performing for a small gathering for the first time in her life. No sooner, she found her soul attached to it and has since been three decades of her musical career. Her journey is interesting and varied, which has also helped her blossom into a skillful music composer. At her last performance, Deepa took center stage along with her youngest daughter and nine artists from the UK. The performance started with Amir Khusrow’s poetry followed by Tufail Niazi’s ‘Kadi aa ve maahi gale lag ve’ and Abida Parveen’s ‘Chhap Tilak’ and was backed by the sarangi, tabla, drums, and guitar. The harmony of these instruments blended with Deepa’s mesmerising voice to leave the audiences spell bound.

Deepa informs that her western co-performers are in fact trained in Indian classical music, which explains their ripe understanding of the taal, raag and sur in music. Deepa believes that a musician must experiment and improvise on the stage, besides keeping track of the central concept of the theme. She says, “Improvisation is a typical element of Indian music, so you have a certain amount of freedom but it is within the parameters of demand of that piece,” she explains. Undoubtedly, Deepa is blessed with some stellar performers who easily manage to play live jugalbandi for more than ten minutes at a stretch.

While the apprehensions of mixing Sufi and Blues for an Indian audience is understood, the British-Indian singer is uninhibited. For her, it’s a natural progression, as it combines the very two elements that have influenced her life. “I was confident because my music speaks for itself. We use both Indian and western authentic ragas and beats based music,” she says.

Over the last few years, music in India too has been affected by this wave of fusion from the west. Deepa believes that this trend has caught on in the east because the world is getting smaller and these influences are bound to happen with an easy access to other cultures. However, she finds the musical harmony missing when Indians fuse genres, “Indian bands still have to base their feet to deliver harmony based music that makes sense to westerns,” she claims adding that the Indian approach to harmony in the western context might sound contrived.

Deepa also fears that Indian music might be loosing its charm. She follows it up with the words, “You don’t necessarily have to bombard people with hardcore approach of music, and it is okay to put your music across in a rational way.”

The mother of two is also the founder of KauRas in the UK and says that both her daughters are equally involved in the works. Her album ‘Nanak Naam’ – Sikh Shabad is making waves on the Internet and is giving listeners a taste of soulful Sufi melodies. “I have a long way to go, I am focusing on my performances as well as KauRas,” says Deepa.

The musician will be touring India for the next five months and will perform at the Mahindra Kabira Festival in Banaras and at the Jaipur Literature Festival in January next year.