As Tajdar Junaid tries to encompass all his inspirations into his music, he keeps his ears open to all sorts of sounds. 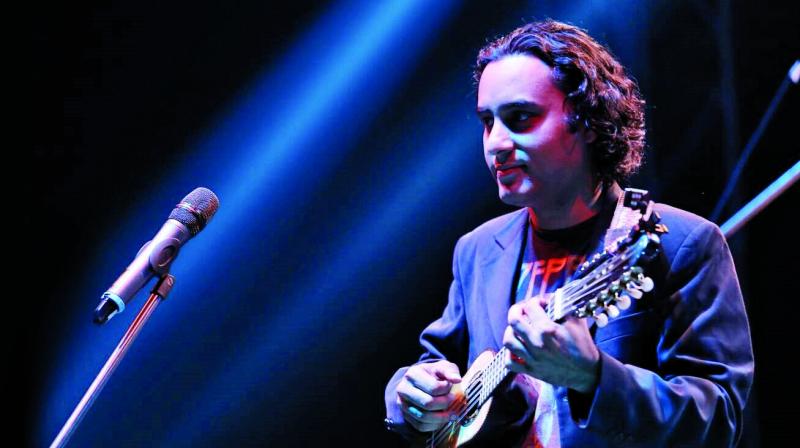 “Music played by my father on the radio — Begum Akhtar, Ghulam Ali and then the best of Grammy tapes he’d buy us where I discovered REM, Metallica and many others — inspired my album,” says multi-instrumentalist songwriter, composer and producer Tajdar Junaid, speaking about memories of his childhood that translated into the sound of his album What Colour is Your Raindrop, which he cut in 2013.

“I went to my first concert ever when I was five years old and I could tell something special was happening. It had Allah Rakha saheb with his three sons Zakir, Taufiq, Fazal, along with Sabir Khan saab on the sarangi,” reminisces Tajdar. It is no wonder then that a musician with such a varied background would make use of his multifaceted inspirations to create melodies like these — elements of post rock, and sounds from the realms of classical music from both the East and the West. “I’m quite a curious musician, who keeps his ears open all the time. I soak all the goodness that one can and the bad will filter itself out,” he smiles.

Tajdar’s father, Junaid Ahmad, who influenced his early musical taste, did not just open up new horizons for the musician as a child, but also collaborated with him on one of the songs on his album, Yadon Ki Pari. He wrote the Urdu poetry on it. “He has been a huge support and continues to be. Whether it’s been with words of encouragement or repairing the electronics when my instrument needs work. He is always there and this is something I’m grateful for,” says the Kolkata-based composer.

Aside from his father, Tajdar collaborated with 18 artistes from around the world for his album. “My debut album What Colour Is Your Raindrop is a personal photograph of all that has inspired me. I like the serenity of Indian classical and I also like the textural chaos of Sigur Ros. I like the gap between notes of Chopin and I also dig Albert King’s wails. I also love the innocence of Iranian cinema and at the same time I am amazed by Haruki Murakami’s wicked imagination. So, the adventure was to put all these emotions and colours together and in the process have a bucketful of fun too. The best bit was I was writing songs and sending it to people from across the globe, few of whom I had never met. That leap of faith and having belief that someone else will relate to your emotions and then put their stamp on it was quite a moving experience,” he reminisces.

While many of his compositions are perfect to listen to on a rainy afternoon at home, Tajdar enjoys his live sets just as much, mixing up his line-up every time he performs. “I keep changing the live set all the time. I’m performing at the Spoken festival at Mumbai on 29th Oct where I’m debuting my acoustic band, which features violin, sarangi, percussions and me on the Argentine ron roco. It keeps me excited to rearrange elements in the live set-up,” says the musician.

With several instruments under his belt, Tajdar still remembers picking up his first one. “The guitar was my first ever instrument. Right now, I’m composing music for a children’s film based in Ladakh and I went across to Leh and picked up their local folk instrument called the dramyin. It’s a beautiful fretless instrument which I’m using for the score,” explains Tajdar, as his curiosity is piqued every time he spots a new instrument, or a new project in his journey.