In chaotic times what could be better than allowing the tranquility of Purab Ang Gayaki to calm you. 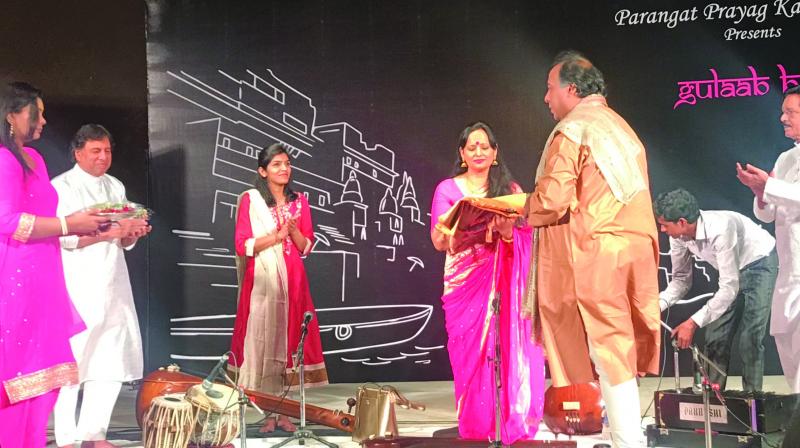 The Purab Ang Gayaki of Benaras is all set to calm your senses! Vidushi Sunanda Sharma, a renowned vocalist from Benaras Gharana and disciple of Padma Vibhushan Girija Devi, recently transported the Capital into a world of earthiness.

Sunanda took everyone through a musical journey that depicted every element she made up of — her roots, her life and her evolution as an artiste — all woven together in subtlety and brought forth to compose an evening to remember.

Purab Ang Gayaki is a style of Indian classical music, which is often called “Charon Pat ki Gayaki” and is equally adorned with different classical and semi classical genres.

This musical affair is an attempt to help the art trickle down to younger generation and help them appreciate Indian classical music and every genre it envelops.

Sunanda, born to a musical family in Himachal Pradesh, embraced music since an early age under the guidance of her father Pandit Sudarshan Sharma. She is known for her prowess in Khayal, Tappa, Thumri, Dadra and Chaiti style of singing. She has also spread her wings in the genre of Punjabi and Himachali folk as well as devotional music.

In her performance for Gulaab Bari, she sang compositions based on spring season and styles related to fragrance, flowers, colours, which speak of love and nature. She relived the tradition of Benaras with Gullab Ki Holi, Itra, Paan and more of an age-old tradition of Benaras Celebration in the month of April.

It is celebrated for the season of “Gullab”, done through music genres like “Chaiti”, “Thumri”, Hori”.

On asking about her musical journey, she said, “I got into music because of her Father Pandit Sudarshan Sharma who was a great Violinist and has trained so many students in Himachal and Punjab because of my father.”