L. Subramaniam on his violin, his musical journey, and more 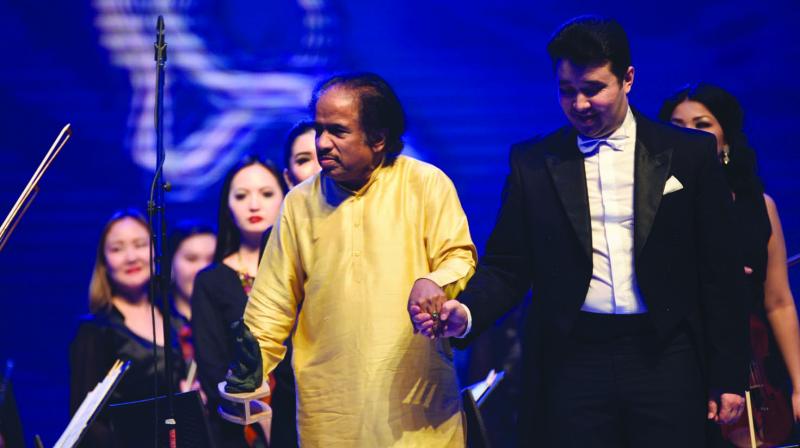 Padma Bhushan recipient and Grammy nominated Dr L. Subramaniam is one of the best known violinists globally; his career as a soloist and accompanying artist is over 5 decades old. His extensive knowledge of Western classical music which he has studied gives him a unique edge in his musical interpretations and compositions. He is also a prolific composer and has worked with over 150 orchestras all over the world, apart from writing several symphonies. His hit music for Indian films including Salaam Bombay and Mississippi Masala is well known. He is as deliberate and explicit in his speech as he is with his violin, and it was an honour to interact with him, prior to his MTV Summit concert in Jaipur.

On the MTV Summit, Dr L. Subramaniam verbalized "such meets where one can meet and interact with fellow musicians and music lovers is always interesting and I applaud such initiatives".

Tell us about your early years.

From my school days, when my father was teaching, it was music all the time. We constantly heard music all the time; heard our father teaching others, apart from teaching us. So I feel our absorption was faster and we could assimilate more subconsciously, as we took in a lot more than others did. My father always used to say that it's only after you have mastered your instrument that you can express what you want. If you don't have technical mastery you can only play what you can physically express, your expression is limited. Your fingers can't keep pace with your mind.  By the 2nd year of my medical training I realized that music was what I really wanted to do. The satisfaction I got through music was not near anything that I got from anything else. The great Chembai Vaidyanathana Bhagavatar told me fairly early on that it is in music that you will be an emperor, you will not go far in medicine, I don't think you will practice medicine. That was a turning point for me.

I have played with some of the greatest Indian musicians as an accompanyist, my solos started in my early twenties with my brothers in our violin trio. I toured the US very early too.

I did my Masters in Western classical music, then did my PhD in raga harmony for orchestras. In our Carnatic system we have all the harmony, though this is not acknowledged at all. We have implied harmony available, we have just not concentrated on displaying it. My thesis brings this out; if Westerners learn our system, they will have more possibilities of creation using our system. When it comes to harmonic systems in Carnatic music we have 72 parent scales, but these are not all comprehensive. I have distilled these into 36 scales; there are unlimited possibilities of combinations and permutations.

In Western classical music there are different periods of music creation (Baroque, Romantic etc) which we don't have.

Your concert career is unparalleled; please expand on this.

(Dr L Subramaniam laughs deprecatingly) True, I have played in the best venues, one of my most memorable concerts was playing with Yehudi Menuhin at the United Nations. In Paris I recently played at a fantastic place that has just opened, the Philaharmonia De Paris - the sound system there is probably the best I have heard. Last year in October I played in London at the Royal Albert Hall.

To what do you attribute the richness of your violin?

Traditionally in South India the violin was only used as an accompanying instrument; my father wanted to bring out the full potential of the violin and play it as a solo instrument. So he developed several violin techniques which are very sophisticated.  Smooth sustained notes, long bowing, playing multiple notes, left hand technique which brings in more clarity; there are many things.

The 7 notes are combined and creatively used to expand what they are. If we think holistically, creativity can be spontaneously enhanced. Spiritually there is another dimension, your inner voice guides you to the next note. Mathamatics are yet another dimension. Music in itself is a complete system, if someone has other additional knowledge, his music will have more in it.

You seem to play Carnatic music differently, your playing is not "gamaka" laden, as is traditional. Please elaborate.

I feel, correctly, in "gamakas" only the more important notes are to be oscillated. If every note is oscillated, the effect is blurred. Only the most important micro notes should be stressed on. Whatever raga you play, the feeling and emotion of the raga should emerge in the first few notes, within 2-3 minutes. It should not be that half the raga is over before you know what it is. The sensitivity of the raga is critical, the importance is to highlight the music, the emotion. The beauty of ornamentation is to know what to highlight and stress.

In the West it would be David Oistrakh, Jascha Heifetz, Yehudi Menuhin, Ruggiero Ricci. In the Indian context, our violinists traditionally have followed and accompanied rather than leading the way. Because we sat on the floor and played, the perception was we only created folk and ethnic music. Technically we were perceived as being backward. This wrong perception is now changing. When I started playing in orchestras, Westerners sat up and noticed.

Do you feel our Indian music is constricting in terms of grammar of raga and constraints of taal?

No, not at all, the constraints of raga don't exist for me. If my creativity takes me into another direction,  I simply create something new, I have made many new ragas. Our system doesn't say one can't create a new raga. Taal too does not hamper me at all. I don't find any constraints, once you start playing the inner voice guides you.

Dr Subramaniam, what does the future hold for you?

My children Bindu and Ambi are in music, I am very happy about this. Ambi has worked hard and he is continuing my father's tradition of violin. He has played with me since he was 9; I am quite spontaneous on stage, so he has had to keep pace with me. With everyone's blessings I hope he will go far.