He has travelled the world over from a relatively young age with his illustrious guru Pt Ravi Shankar. 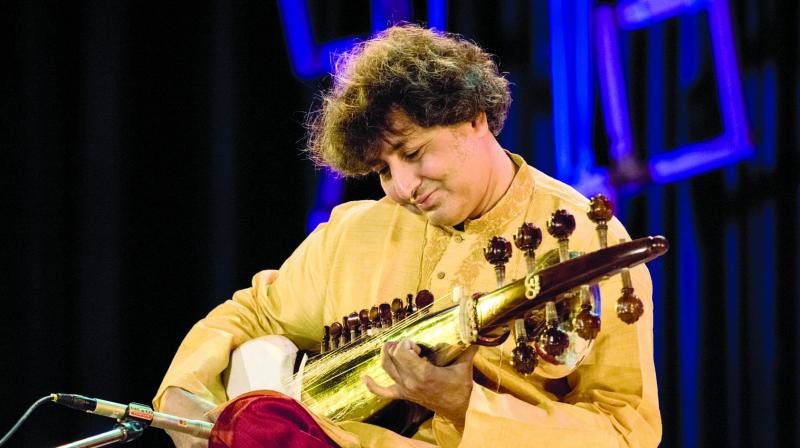 Known the world over as “Partho Sarodi”, Partho Sarathy is the only sarod-playing disciple of the legendary Pandit Ravi Shankar. One of the finest sarod players in the world today, Partho Sarathy combines meticulous taalim with an aesthetic temperament. He has travelled the world over from a relatively young age with his illustrious guru Pt Ravi Shankar, and accompanied him on such prestigious stages like the Carnegie Hall in NY, to the Royal Albert Hall, London. Extremely humble, Partho Sarathy deprecates all attempts to delve into his rock-star like experiences and speaks very modestly about his achievements.

Partho da, please tell us about your life as a musician from the beginning.

I started learning how to play the sarod from my father, Sudhamoy Chowdhury from the age of eight; I saw his old sarod lying on top of a cupboard, unused, and asked him what it was. My father got very enthused, as he had learnt the sarod from the great doyen Pt. Radhika Mohan Maitra. He brought it down and asked me if I wanted to learn how to play it. Without knowing then what the implications of learning the sarod were, I said yes. Since then I have been playing!

After two years, I started learning from Ustad Dhyanesh Khan, son of the great master, Ustad Ali Akbar Khan, from whom I learnt for 10 years. From about 1980, I went to my Guru, Pt Ravi Shankar from whom I learnt till his death. I lived in Delhi with him for 15 years in his Lodi Estate house, and travelled with him all over, till 1995. I am extremely fortunate to have even shared the stage with him all over the world. After 1995, I got married and moved back to Calcutta.

Tell us some memories of Pt Ravi Shankar:

Panditji was very humble, very child-like. He loved Bengali food! He was a highly disciplined person, extremely punctual. He loved jokes – telling them as well as listening to them. He was very easy to travel with – I remember once travelling by train with him to Bordeaux, we ate so much, laughed so much and he also taught me many new “tihais” (rhythmic phrase in threes). Great memories of a great man!  He taught us all as much as he could, whenever he got the opportunity, given how very busy he was. After 6 months of my joining him, Shubhendra Rao came and started learning, then later, Abhiman Kaushal, and then Gaurav Mazumdar.

I had already been taught fully on sarod craft by Ustad Dhyanesh Khan, so it was never a problem to learn from him, as a sitariya. I learnt the finer nuances of ragas, shades of ragas, the slight differences between ragas, which only he could teach me
Just before he passed away, I had a concert in San Diego with Tanmoy Bose – I was hoping he would be able to come and bless me, but he was not well.  You won’t believe this, he got Sukanya ji (his wife Sukanya Shankar) to call me, during the concert, but I never heard the phone ring as it was on silent so I never answered. After the concert, his disciple called me and said Panditji heard the whole concert on his phone, and said to tell you he liked it, and he was proud of you!! That was such a blessing for me. I wish I remembered what I had played at that concert!!

Tell us about your journey as a musician:

By God’s Grace I have been extremely well taught, so I can handle a raga in different ways, sometimes emphasising the sarod baaj (instrumental style) aspect, sometimes the laya (rhythm) aspect sometimes the lyricity.

My first concert abroad was in Russia. We played at the Kremlin. I played in an orchestra of Panditji’s with many other great musicians  — Pt Vishwamohan Mohan, Pt Daya Shankar ji, Pt Kumar Bose, Shubhendra. After that I travelled with him on tour, and started accompanying him on stage.

Moving on, tell us about something that really scared you.

One of my scariest experiences was on a train many years ago – my wife, daughter, disciple and I were going by a night train from Kolkata to Benaras, where I was to perform at a memorial concert organised by A.N. Dubey (who was Pt Ravi Shankar’s secretary for many years). We were travelling by the common sleeper class, in those days there was not much money! Just after the train started, at Srerampur, about 60 minutes into the journey, our fellow passengers suddenly took out swords and threatened us! They were train dacoits! Luckily, they did not bother to ransack our luggage which had our money, but just snatched what we wore, and went down the coach fast, grabbing from everyone. That was really scary.

What about your personal life?

My wife is the daughter of the great musicians Prasun and Meera Bannerji, so she understands me very well. We have one daughter who is studying as of now.