S Akash from Mumbai who has trained in the Hindustani style played Raga Durga, accompanied by Mumbai based Anuvrata Chatterji. 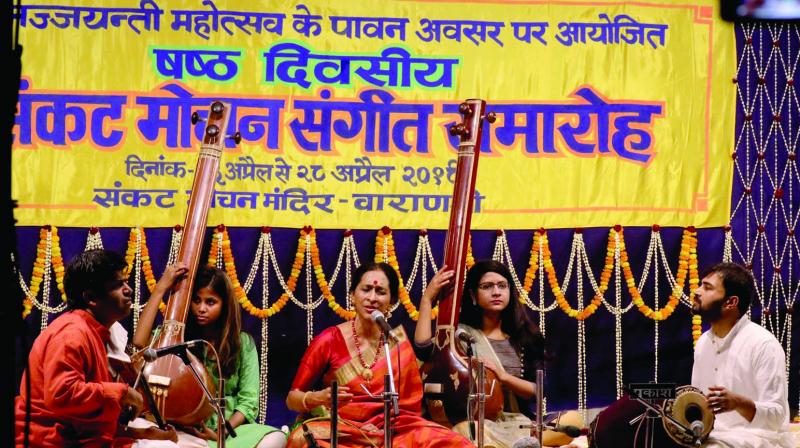 Banaras or Kashi as it was known, has its own khayal gharana (tradition), a gharana for thumri, as well as a gharana for tabla. Musicians from Banaras went to Lucknow to popularise the dance form of kathak that became the court dance, so in a sense Banaras can be said to have mothered that style of kathak as well. This is unique in the world of classical music; no other town has this great expansive tradition.

Every little street has a budding musician; the rasikas (those who savour) of the town are innumerable; in the words of Pt Suresh Talwalkar, “everyone in Banaras is a guru, never a student”. As such, Banaras’ premier home-sprung dance and music festival held annually at the Sankat Mochan Hanuman temple attracts huge crowds through the night, for six consecutive nights — unknown anywhere else in India. More than 140 artistes congregated in Banaras last week; Hotel Diamond where mostly all the artistes stayed was a fan’s delight, where one was able to bump into an artiste any time of day or night.

Organised by the temple mahant, Prof Vishwambharnath Mishra, and his bevy of trusted lieutenants, the festival saw around eight concerts every night, starting from 7.30 pm and ending the next day at 6 or 7 am. Listeners sprawled in the temple courtyard; the traditional Banarasi method of applause with loud cries of “Har har Mahadev”, delivered with arms raised, frequently resounding through the night.

Raga Saraswati and Raga Durga seemed to be two favourites during the first two days; Vidushi Manju Mehta on the sitar played Saraswati on the opening night, followed by Ustad Rashid Khan singing it at length the next day. On the tabla was Pt Puran Maharaj, son of Banaras’ favourite Padma Vibhushan Pt Kishan Maharaj. Mehta’s playing reveals great taalim (training) to which she sticks meticulously, not taking short cuts, nor prolonging the recital. (She has learnt her craft from Pt Ravi Shankar).

S. Akash from Mumbai who has trained in the Hindustani style played Raga Durga, accompanied by Mumbai based Anuvrata Chatterji. The recital was full of energy and planned flourishes, much to the delight of the audience. The next night Pt Hari Prasad Chaurasia played Raga Durga too — a more restrained and calibrated performance. On the tabla was Pt Subhankar Banerji, whose intimate knowledge of music (he is a trained vocalist) makes him one of the most perceptive and sensitive accompanists today. Also on the flute the second day was the Carnatic maestro, Vidwan Shashank Subramanium, who was accompanied by Pt Tanmoy Bose, another extraordinarily sensitive accompanist, incidentally also a trained vocalist, and Phalgun Parapalli on the mridangam. All classical music is learnt and rehearsed innumerable times; to have impact it has to be actually felt by the performer.

Vidushi Bombay Jayashri was the first ever Carnatic vocalist to perform at this darbar (women were never permitted earlier to perform). Indeed the inclusion of Carnatic musicians at the Sankat Mochan Sangeet Samaroh is an old tradition, and is testimony to the wide-ranging eclectic audience. Earlier performers have included doyens like late Vidwan U Sriniwas, Pt Kadri Gopalnath and Dr L Subramaniam.

Bombay Jayashri savoured the unique vibe of the festival and marveled at the diverse audience. She sang perhaps one of her shortest concerts ever, as the time slots were under an hour; she was accompanied on the mridangam by Anantha R. Krishnan (grandson of the legendary Vidwan Palghat Raghu) and on the violin by Mysore Shrikanth.

Anup Jalota, U. Rajesh and Sivamani, and the young star Ambi Subramaniam (son of Dr L Subramaniam) were the big attractions on the concluding night of the festival.

It was as always a marvel to interact with the audience; a young black burkha clad girl admitted she had come to the temple for the first time, despite being a Banaras resident, to see the kathak dance of Pt Krishna Mohan Maharaj. Luckily for her, his time slot of 4 am had been preponed to 10 pm so she was allowed by her family to attend. There were several other kathak dances as well as performances by Padma Vibhushan Dr Sonal Mansingh and her troupe, Bharatanatyam by Vidushi Geeta Chandran and her daughter, and Odissi by Pt Ratikant Mohapatra, amongst others.

Amongst the popular vocalists were sterling performances by Pt Ulhas Kashalkar, who never misses an opportunity to give his haazri (attendance), and Ustad Rashid Khan (third consecutive year). Kaushiki Chakravorty sang after a gap of a few years. Jayteerth Mevundi returned to sing once more; Sandipan Samajpati sang for the first time.

Sadly, one will have to wait another year now to again immerse in the uniquely addictive ambience of the Sankat Mochan Sangeet Samaroh.