The instant connect of baithaks...

The famous “gulab baari” concerts held around Holi at the Poddar residence in Kolkata are a much sought-after event. 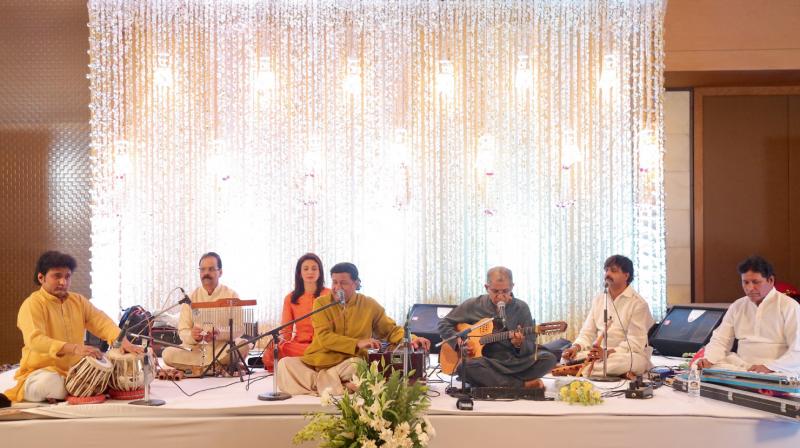 There is no doubt that our classical music was meant to be conducted in a small gathering with one-to-one interactions between the performer and audience, in a baithak format. There was a need to connect as the music is being created on the spot and needs an instant reaction and appreciation. The eye contact between the audience and the artist, the involuntary movement of a hand in appreciation, the faintest murmer of “aah ha ha” or “wah” needs to be absorbed by the artist.

Nowadays with the huge distance between the performer and the audience, in a concert hall, the intimacy of the recital is lost, and artists on stage tend to evoke audience reaction by performing for them. Obviously, this will result in an orchestrated performance and the spontaneity which is an essential ingredient of our music, is lost.

Manjiri Asnare Kelkar, today a leading singer of the Jaipur Atrauli tradition said, “I really enjoy singing in the mehfil format — it gives the artist sufficient time to settle down and create an atmosphere. The performer can connect very closely with the audience.”

Baithaks are, of course, much more common in Kolkata and Varanasi. The famous “gulab baari” concerts held around Holi at the Poddar residence in Kolkata are a much sought-after event. Jayanta Chatterji’s famous baithaks have continued from the 1970s till today and many even today recall hearing Ustad Vilayat Khan, Pt Bhimsen Joshi and others in the intimate setting of his home.

Soirees are so common in the winter that frequently one is invited to up to three homes in the same evening!

Thakur Jaideva Singh’s Holi concerts in Varanasi through the 1970s till his death in 1986 were eagerly awaited events and attracted the finest artists. Today, Pt Rajan Sajan Misra, Poddar family through Gnana Pravaha on the banks of the river and many others have regular music baithaks in Varanasi.

As early as in the 1940s,  the Shriram family of Delhi used to occasionally hold music concerts at their homes at Curzon Road and later in Chanakyapuri, also at their home in Vasant Vihar, and at their farmhouse, continuing this tradition till today. Recently, Arun Bharat Ram had the American Josh Feinberg, sitariya disciple of Ustad Ali Akbar Khan perform at his farmhouse.

In the 1960s, Naina Devi held many baithaks at her residence in Vinay Marg, then Kaka Nagar, under her banner Raag Rang. She hosted the crème de la crème of musicians; in fact, it was said no musician of repute would pass through Delhi without meeting her, known in the music world as Rani Sahiba (she was married to Kr Ripjit Singh of Kapurthala).

Later in the 1970s, Anita Singh (coincidentally also from the Kapurthala family) held concerts at her house in Jangpura, a tradition which continues till today. Prem Shankar Jha is another very well- known organiser at his Golf Links house.

It is interesting to see the baithak format adopted even by foreigners in India. Sheikh Hassan, Ambassador of Qatar was a well-known music connoisseur who hosted several music legends at his house in Delhi in the 1980s, including as elusive a performer as Vidushi Kishori Amonkar.

Vinod Kapur, who claims he was inspired by Nainaji’s baithaks in the 1960s, has kept the tradition alive in a more systematic way and on a larger scale; he has with his VSK Baithaks hosted several greats including Vidushi Girija Devi, Pt Ulhas Kashalkar (thrice) Pts Rajan Sajan Mishra, Vidushi N. Rajam, Ustad Shujaat Khan and many others. Recently, Kapur hosted Prasad Khaparde, now disciple of Ustad Rashid Khan, but earlier a disciple in the Gwalior tradition. His melodious voice and unusual “taan” patterns mark him out as a singer to look out for.

Pt Tejendra Narayan Mazumdar who has played twice for VSK commented, “I enjoy playing in the informal ambience that the baithak brings. There is definitely room for greater spontaneity.”

Delhi-based business- man V.P. Gupta holds very unusual baithaks periodically — barely 20 people are included in his ultra-exclusive guest list so as not to interfere in the artist audience interaction. He feels that too many people, all not totally tuned into the recital, disturb the artist’s attention in such an intimate setting.

Noted Mumbai-based Pt Ajay Pohankar was in his element, and though he noted ruefully he had not sung for three months, was able to hold his small audience spellbound. He was given lyrical support by Delhi gharana’s Fareed Hassan who very appropriately aided Panditji, in the old-fashioned, “gharaanedar” way of being supportive without being obtrusive. As the master concluded, he said “I love singing in this setting, I don’t enjoy singing in an auditorium where I can’t even see who my audience is”.

Bhajan King Anup Jalota sang at the exclusive soiree hosted by Gupta last week; noted flautist Ajay Prasanna accompanied him on the flute. The concluding bhajan which drifted from Raga Des, to Kedara, to Malkaus, Kafi, Bhairavi finally ending again in Des roused the fervent listeners to ecstatic heights of devotion, and they sang along.