An ode to classical music

The music single is already available on various platforms and trending in most top playlists. 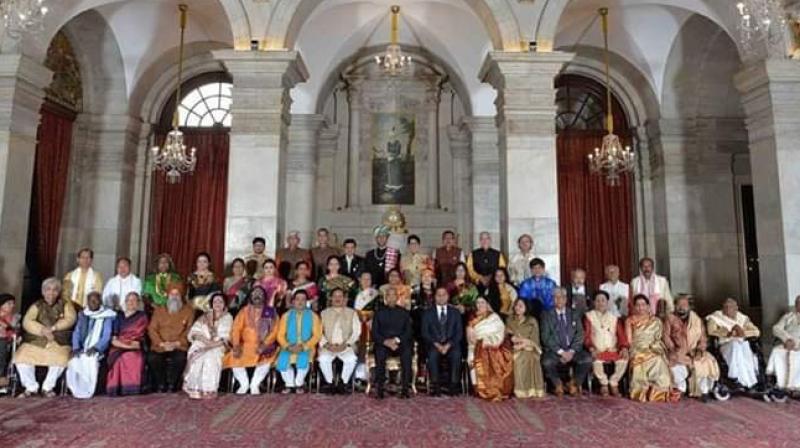 The music single is already available on various platforms and trending in most top playlists.

Rashtrapati Bhawan’s high domed Darbar Hall resounded once again with the solemn announcements of the 41 Sangeet Natak Akademi awardees for 2017 at the award ceremony last week. The pomp of the President’s entry into the hall preceeded by his cavalry Bodyguards, and ADC and followed by his Military Secretary, set the tone for the ceremonial associated with the award ceremony. The Chairman of the Sangeet Natak Akademi Shekhar Sen formally asked the President’s permission to present the awardees, following which the various categories of awards were presented. The first awardee was veteran North Indian vocalist Lalith Rao; the most poignant awardees were two in wheelchairs - from the world of theatre and Jagannath Bayan, born in 1925 who received the award for traditional music of Assam (he plays the khol). As SNA Vice Chairman Aruna Sairam verbalized later, the attempt was to reduce the backlog of artists who for some reason or another had not been honoured earlier, so that the awards are given at a time they are still relevant to the awardees. 9 awards were given for Theatre artists (including to actors playwrights directors) which seemed high considering both North and South Indian musicians were only 11, and dancers only 9.

The ceremony was followed by 5 days of concerts and performances by the awardees at Sangeet Natak Akademi. The first evening featured a vocal dhrupad recital by the Gundecha brothers, Umakant and Ramakant, accompanied on the pakhawaj by the youngest brother Akhilesh. Their sombre rendition of the early evening Raga Marwa set the tone for the evening; the limited 45 minute time slot being carefully utilized optimally to outline all the aspects of the form they have trained in. Their brief “alaap jor jhala” was followed by two compositions in 12 beat and then 10 beat cycle. The duo’s use of harmony in their alaap was most pleasing.

The next recital was by Grammy nominated Carnatic flautist Shashank Subramanyam who at 40 is amongst the youngest ever to receive the award. The other two 40 year old awardees are, surprisingly enough also Carnatic – late Vidwan U Sriniwas and Vidwan Chitravina Ravikiran.  Shashank chose the Carnatic Raga Vagadeeshwari which is one of the 72 Melakarta ragas; a beautiful Raga that showed shades of Hindustani Raga Jog and Khamach. As usual, his recital was a combination of lyricity, extremely melodious pieces being matched by flashes of stunning virtuosity. The composition was in a 8 beat cycle, Shashank shared that Vagadeeshwari was an unusual Raga which had only one major composition being composed in it, despite it being a major Raga.  Accompanying him on the mridangam was Parupalli Phalgun and on the violin Akkarai Sornalatha. The evening ended with the versatile Yogesh Samsi of the Punjab gharana of tabla; today famous for its most popular exponent Ustad Zakir Hussain. Yogesh is his Guru bhai, having learnt from his father Ustad Alah Rakha Khan. His recital in teen taal was as usual a demonstration of his extreme erudition and wide repertoire of compositions from a variety of masters including his own gharanas Ustad Allah Rakha Khan, Pt Sushil Jain (from whom he is also learning), and also Pt Taranath and Ustad Nizamuddin Khan. Delivered as always with great clarity and crispness of strokes, Yogesh as always commands the total attention of his audience who listened totally entranced. The setting, in the open under an enormous well lit banyan tree enhanced the great music.