Ustad Raza Ali Khan grandson of the legendary Bade Ghulam Ali Khan, gets emotional talking about Hyderabad and his life. 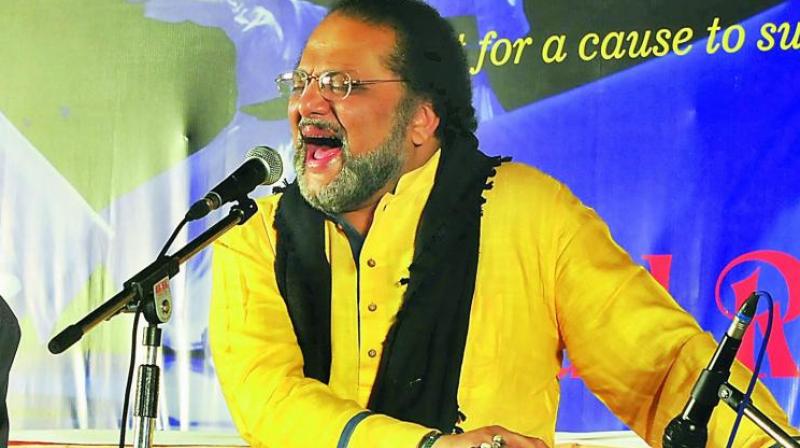 Hindustani classical vocalist Ustad Raza Ali Khan belongs to a family of musicians — his grandfather is the legendary Bade Ghulam Ali Khan and his father is  Ustad Munawar Ali Khan. So naturally, he began learning the art from a very young age. “Music was the only thing that interested me as a kid. But it is a tough job to carry on a legacy as there is a lot of pressure,” says Raza Ali Khan, who was in Hyderabad for a concert over the weekend.

Taking the family’s name ahead has always been crucial for the maestro, but it hasn’t been easy. He says, “It is difficult to carve a niche for yourself when you belong to a legendary family. However, the one advantage is that you are gifted.”

Khan’s grandfather, Bade Ghulam Ali Khan, made sure that his training was interesting. He says, “Every time I learned a particular music piece, Bade Ghulamji would buy me a new toy or take me out. As I grew up, my father continued the training, but on a more serious note.”

Khan’s training was going well but he received the surprise of his life when he turned 14. “I had accompanied my father to a concert at St Xavier’s College, Mumbai. Suddenly, he turned towards me and asked me to perform. I was taken aback. But then he warned me saying that if I didn’t perform well, he would slap me in front of everyone. I was appalled, but I poured my life into the performance and everything went well,” he laughs while reminiscing.

After a few months of that happening, Khan began performing solo, starting off with a youth festival in Kolkata. His father told him that if the performance was a success, he was set for life — and it was.

Performing in Hyderabad brings up a lot of emotions for Khan. After all,  the singer lived in the city for long and is even married to Samina Khan, the daughter of Nawab Ghaziuddin Khan. “I’m currently working at the West Bengal State Music Academy, Kolkata, but I miss Hyderabad and my friends — poet Agha Sarosh, Dr Geeta Reddy and other artistes. I have lived in Red Hills, Basheerbagh and even Banjara Hills. The food, language and the laid-back attitude of people here is amazing. I’ve also performed at the Chowmahalla Palace, Hari Hara Kala Bhavan and the Golconda Fort several times,” he recalls.

While performances keep Khan busy, he still manages to take time out to nurture new talent, and is currently training his son and nephew.

Khan, who has been singing since decades now, doesn’t plan to stop anytime soon. “Learning classical music is a never-ending journey and you get to learn something each time you perform. But one must keep practising and keep learning,” he says.