The emphasis was totally on the lyrics and emotion to be conveyed. 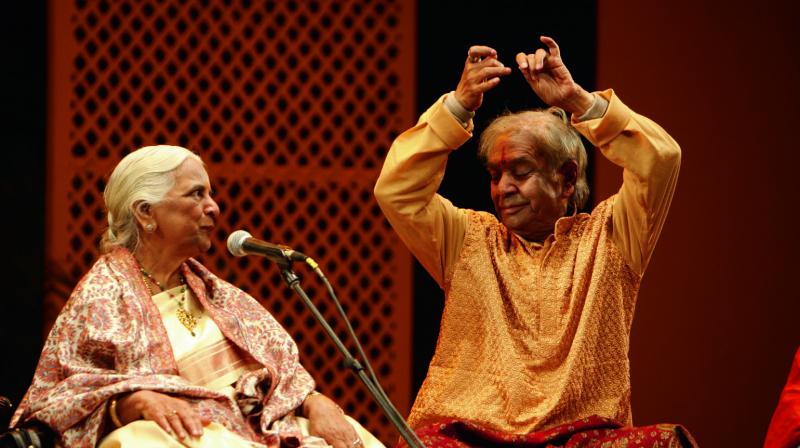 The King of Kathak spoke of the evolution of thumri — he recalled how thumri provided artistic license to take minor liberties with the raga, thus making it a highly subtle, and more evolved form of singing. He spoke of how his grandfather, Bindadin Maharaj, had a huge contributory role in the evolution of the format of currently sung thumri — he lengthened the antara. This resulted in allowing greater room for improvisation to show emotion.

The recent demise of thumri doyen Girija Devi has shaken the world of thumri — equally bereft was Padma Vibhushan Pandit Birju Maharaj, more known for his kathak than his thumri, though he is equally learned in thumri too. His beautiful hooded eyes were moist with unshed tears as he spoke of his “sister” Girija Devi. Reminiscing gently over the past, he spoke of his special relationship with Girija Devi, who though older than him, was like a sister-in-law with whom he grew up, and she additionally learned from his father-in-law. It was she who made all the arrangements at my marriage, he said.

“Nok jhok (teasing) hamari bahut chalti thi. Mein kehta tha, ho to tum humse baree, lekin acchi lagti ho; woh hasti thi, kehti thi, jaao maarenge tumhe” (we used to tease each other a lot, I would say though you are older than me, I like you a lot. She would laugh and retort, away with you, I’ll hit you).“

“Mein usse kehta tha, tum kehti thi, seekhne aayi hun, lekin mujhe pata hai tum mujhe milne aati thi (when she used to say she came over to my house every day in Banaras to learn, I used to tease her saying I knew you used it as an excuse to come and meet me).”

Such affectionate jibes were commonly exchanged by them even on stage during their frequent jugalbandis. The King of Kathak spoke of the evolution of thumri — he recalled how thumri provided artistic license to take minor liberties with the raga, thus making it a highly subtle, and more evolved form of singing.

Suitable ragas that allowed note liberties were Khamach, Pilu, Kafi, Sindhu Bhairavi, Des amongst others. The emphasis was totally on the lyrics and emotion to be conveyed. “nazareeya hee alag ho gaya” (the thinking of how to sing changed). He spoke of how his grandfather Bindadin Maharaj had a huge contributory role in the evolution of the format of currently sung thumri — he lengthened the antara (the concluding portion of a composition that uses the higher notes). This resulted in allowing greater room for improvisation to show “bhaav” (emotion). He explained how thumri, though it developed in Banaras at around the same time, was different to the form it took in Lucknow, as in Lucknow “aao bhaao” (expression of bhaav or emotion) had greater emphasis — in Banaras the visual aspect of the thumri was never developed as in Lucknow, where dance in the court of Nawab Wajid Ali Shah was very prominent.

All three art forms were equally important — the gestures through dance, the lyrics and music to express emotion, and the laya or rhythm. His family was unique in being adept in all three; as he himself is. He admitted this is rare — once during a workshop, the great playback singer Asha Bhonsle admitted that “inko dekh dekh ke meri awaaz mein bhaav aa gaya. Tarhey tarhey ki cheezon mein bhaav aaya (spending time with him inspired me to be able to bring ‘bhaav’ in my singing — in different types of songs, different emotions crept in)”.

My uncle Pt Shambhu Maharaj used to say “awaaz se bhaav dikha do, phir aankhon se bhaav dikhao (first bring the emotion of in your voice, then show it through your eyes, as a dancer)”.

Birju Maharaj spoke of why the culture of the arts was so prominent in Lucknow. “My ancestors taught thumri to everyone during their time in Lucknow — from the tawaifs to craftsmen, local rasikas. They stopped the caste distinctions that used to exist at the time. That’s why there is such widespread awareness of the arts in Lucknow — after all the Nawab’s court was dismantled more than 100 years ago!!! Munnan Bai, Badi Moti Bai, Choti Moti Bai…... these are some of the names I remember who picked up things from my ancestors. They have all passed away now — I believe Zarina Bai is still there in Lucknow. I recall Abdul Hayi, a hatmaker in Nazirabad Bazar, Lucknow, used to come every evening and participate in the night long thumri sessions. I remember his Lucknowi chikan kurta, ittar, paan in his mouth… He was at our home every night.

A paan shop owner, who used to wear a dopali (double sided topi) — I forget his name — used to come over to play the tabla, the minute he had earned enough from his shop to close it. I remember my chacha Pt Shambhu Maharaj used to say, “Arre jisne bajaana hai, bajaao, nahin to ek baar iska haath lag gaya, raat bhar chorega nahin (listen, whoever wants to play the tabla, do it now as once he starts, he won’t stop all night).” Those people sang for themselves, not only to please others, or at concerts. “Apne liye gaana bajana hota tha (music was for themselves).”

Maharajji continued, “I remember babu (his father) used to go in a tonga in the day to teach the tawaifs in the city. I remember once when he walked in from the road, some fresh dry mud fell off his shoes, inside the teaching room. He was upset, but the lady he was teaching immediately swept it up, and added it to the tulsi plant in her aangan!

“Guru ke charanon ka prasad hai,” she said. Those days such dedication and awe of the Guru was common; nowadays the students just want to learn items so they can be on stage. There is no real reverence.

The family originally belonged to Banaras — he said “the relationship of our family with Banaras is what I call ‘choli daman ka rishta (the link of the blouse with the sari, i.e. inseparable) — one can’t exist without the other’. We are inter married all over. Our original village was “Ichkila”, our relations and kinsmen from Banaras were Raaj gayaks (court musicians) even in Nepal, in Darbhanga……, they went all over except Mahara-shtra. My own father was in the Rampur court — all my three sisters were born there, I was the only one to be born in Lucknow. We also went to Raigarh; I recall the Maharaj of Raigarh spoke to his brother, Prince in Rampur, (where we lived) and asked for my father to go to his court for a while.

“They (the Princes) used to get bored — there was no other entertainment except live entertainment. We even lived in Dehradun for a few days. Once, I remember, Seth Hari Kishore was a patron, my father taught his two daughters, I was only two-and-half or three at the time. Music travelled all over, in different states, in this way. In Gaya too there was a huge tradition of thumri — Pt Ramu Mishra I remember used to sing very well.”

Continuing to delve through memory lane, the doyen recalled, “I used to sing a lot of thumri for All-India Radio when I first came to Delhi in the early 1950s — once I remember my uncle

“Birju Maharaj pointed out, a huge beneficial effect to thumri in recent years was from Hindi film music — it alerted the singers to the significance of the lyrics. In fact in Calcutta, thumri which went there from Lucknow never really retained a position of importance because the Bengalis found it hard to emote in the alien language.”

Continuing to trace his life’s work, Birju Maharaj spoke of his work in films — “Shatranj ke Khilari” was a beautiful film in which I sang too, and Shaswati Sen, my disciple did the dance piece in front of Amjad Khan who played the Nawab’s role. Satyajit Ray told me, I want a dance that the Nawab watches with “sukoon in his face; not a swift exciting dance sequence”.

“Madhuri Dixit once attended a dance workshop of mine in San Francisco, and she was copying the movements in the wings; I noticed her ability to pick up was excellent so I encouraged her to dance in front. This led to the Yash Raj film, Dil To Pagal Hai – I choreographed a small 2 minute piece of Madhuri dancing in that. Following this was Sanjay Leela Bhansali’s film in which my father’s thumri was also picturised — ‘kaahe chere chere mohe’. In Ghadar, I arranged a group dance, I did a piece for ‘Derh Ishiqiya’ and most recently, choreographed Deepika Padukone in Bajirao. Deepika was very nervous about her ability to execute my movements but she did very well. I learnt a lot about the process of filmmaking — I was stunned initially seeing they would shoot the last scene first sometimes. But I must say, the end result was superb.”

I asked Maharajji about his collaborations with other artistes — he recalled he had performed with Kishori Amonkar, Girija Devi, Shobha Gurtu, Dr L. Subramanium, Ustad Nishat Khan amongst others.

The multi-facetted artiste concluded our long chat with the words: “Prabhu ki kripa se bahut accha time dekha hai.” Indeed, it was an age of grace, courtly manners, elegance, and artistic excellence that has now passed.