This year's festivals once again appear to be experiences of a lifetime, though not necessarily only for the audience. 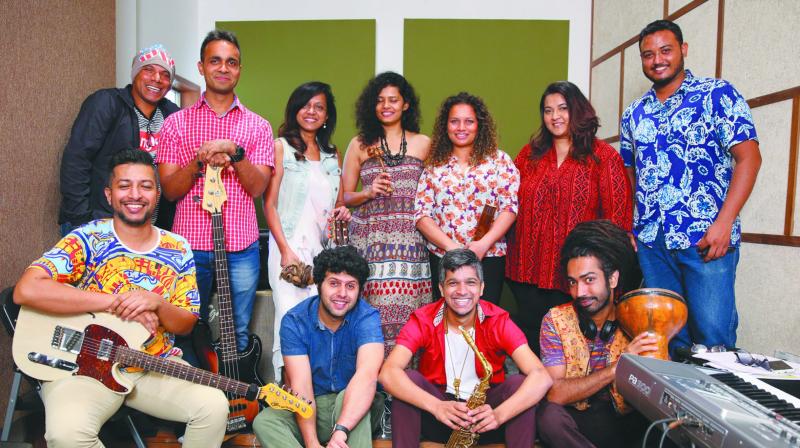 Keyboardist Merlin DSouza (3rd from left, above) with her group.

While the digital space has provided opportunities for every musician to showcase their respective talent either through the innumerable platforms that exist and/or through social mediums, the genuine problem that I believe has arisen due to these multiple choices is that of clutter. In fact, while there used to be a time when digital platforms were utilised for discovery; now, unless someone known to you forwards an URL, you are not likely to make a proactive effort to "search" for an artiste, essentially due to time constraints rather than not having an inclination towards discovery. Hence, my belief is that, as consumers are moving towards paid services and, with it, an enhanced traction by the multitude of OTT [over-the-top] players existing in the digital market, it may be an appropriate time for these players to dedicate programmes for independent - or "indie" - artistes to showcase their talent, moreso as you now have existing subscribers aware of the superior quality of programmes being featured on such platforms and, hence, are likely to support this initiative not only as captive viewers, but also as consumers of the content being showcased. I would certainly be one of those supporters!

No such clutter issues for live musical events as the festive season commences with promotions in full swing for now established events that have been building their successes, through the years, in not only showcasing established talent, but by supporting indie talent too! Events that immediately come to mind are Sunburn, which is scheduled to commence in Pune on December 29. Prior to that is the nine-year-old NH7 Weekender, also scheduled in Pune, on December 7, and its Meghalaya brethren, scheduled from November 2. But, in all this, the privilege of “opening” this season's live festivities as it were, on October 6 and 7, goes to Mumbai's now annual Paddy Fields festival. Curated by Turnkey Music and Publishing, which is headed by industry doyen Atul Churamani, this event makes subtle amendments to its folk-based avatar on a year on year basis, which is precisely what makes it so unique. Promoting the third season with another brilliant concept that further explores the realms of Indian music by addressing an age old question: Did Indian classical music have its origins in folk music?

While there is no denying that folk and classical music are two distinct genres, the theme of this year's Paddy Fields attempts to find an answer whether that was always the case or was it that - through the years, through evolution, and through their exponents - both genres were forced into separate paths? The simple distinction here between the two is that folk music is a free flowing form with little or no parameters, while classical music follows distinctive patterns of melody and rhythm with acceptable variants.

In an effort to achieve a logical conclusion, Paddy Fields has created the concept of “Jugalbandi: The Classicism Of Folk Fusion” this year, an event where the structured meet free form, musical boundaries are pushed, stories are told through raga, and musical walls are broken.

To support these descriptions, there are several potential highlights in store. For starters, music director Shantanu Moitra, who I first connected with in 1999 as part of the team at EMI India [then Virgin Records] that recorded 'Ab Ke Sawan' with Hindustani classical singer Shubha Mudgal, focuses on “Music From The Himalayas”, performed by vocalist Kaushiki Chakraborty, Tibetan monk Ani Choying, and classical sitar player Purbayan Chatterjee. Another high point is likely to be a make-shift band, especially created for this festival, called Viva La Goa, where Konkani, Portuguese, and even strains of western classical music are combined, led by keyboard wizard Merlin D'Souza, and supported by sax prodigy Rhys Sebastian, among others. Then there is the 'Manganiyar' classroom, which features children aged between eight and 12, undertaking a 'jugalbandi' with their teacher, with a repository consisting of song, dance, and rhythm. No musical event can ignore Bollywood, and neither does Paddy Fields, as the curators have requested music director Amit Trivedi to explore folk music pan-India and demonstrate live how he weaves it into film songs. A country fusion of sorts!

This year's festivals once again appear to be experiences of a lifetime, though not necessarily only for the audience, but for the performers as well, as the combination of musical education and sheer entertainment promises to make 2018 into another landmark year when indie content continues flowing into the musical mainstream.