A punk state of mind

Markey Ramone minces no words. It’s probably what still makes the drummer of erstwhile band Ramones still one of the most punk rockers on the scene. 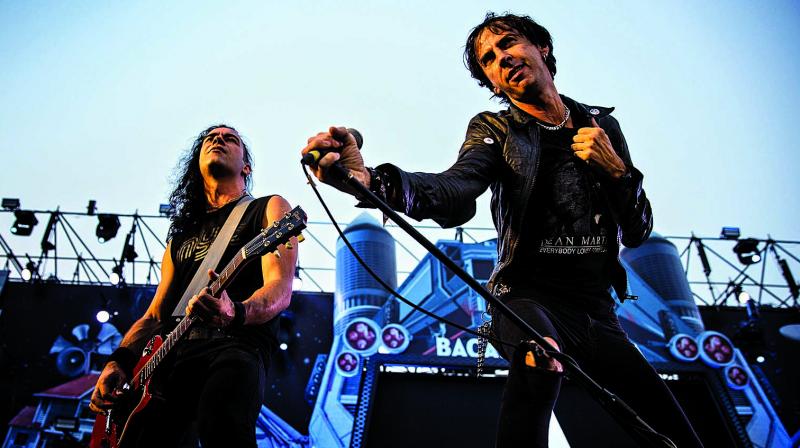 They say rockstars never age. But punk rockers defy the numbers game around age even harder. Take Marky Ramone for example. Part of the iconic Ramones, Marky, at the age of 65, is still living the tour life. The  musician, whose real name is Marc Steven Bell, joined the band in 1978.
Markey happened to be one of the biggest draws at NH7 Weekender’s Pune leg this weekend, having people headbanging right from the first row to the last. And while punk’s supposed to be the voice of rebellion for years, in a freewheeling chat Markey explains to us why punk’s not dead. Excerpts:

You were a part of one of the first punk bands to be formed. What were the first few years of the movement like? Do you still identify with it?
At the time, the situation in New York City was pretty bad. Big economic crisis, unemployment, young people who did not have many chances to be developed… So, music was a big chance for us to escape from this situation and let all our frustrations go away with the music.

Go on…
Now, after the years, when I look back, I realise what we did. It’s amazing how random guys with no college studies could create such a huge, artistic movement. It was natural too, coming out from the streets. People do not change but technology does. Of course I still identify with it. I think art is the best way to express your thoughts. We may now have phones and the Internet, but the frustrations are the same — love, war, and crisis.

Do you think there are still any genuine punk rockers left any longer?
Look, being a punk rocker isn’t about safety pins and stuff. It’s being honest and doing what you think is best. And of course there are people! Anybody who keeps that way of living is a punk rocker to me; it’s a matter of attitude.

The Sex Pistols were one of the other top punk bands back in the day. What was your relation or rivalry with the band like?
They came out after NYC punk rock, not only Ramones, but also Richard Hell and the Voidoids. Punk started in the UK as a manufactured thing in the hands of Malcolm McClaren. They copied the sound of Ramones and the look of Richard Hell. Of course though, there are real things like The Clash. There was no real relation for The Pistols.

So, is punk dead?
Again, to me, it’s not dead. It’s all about the attitude.

Music evolves with time. Do you think punk can have another lease at life through electronica?
Of course, every sort of music fills the gap. Electronica has the crowd, and punk — as a movement, not just as the music — had its own. People need to express their thoughts, and I doubt it can be done with just a machine.

How do you feel about Blitzkreig Bop being used in a high-budget studio movie like Spider-Man Homecoming?
I feel flattered! Who was going to tell us in the ’70s that the song would become an anthem? And obviously, they’d better play the Bop instead of a Britney Spears song!

Talking of the ’70s, do you think that someone like Donald Trump could have been elected President back then? Punk music is known to take a strong political stand!
I hate Trump. I really, really hate him. I did not vote for him, and I’m sure he’s not going to be re-elected. As to whether he would’ve won back then? It’s hard to tell... I hope not. (smiles)

As part of a punk band, how do you follow the DIY ethic?
These are really nice words, but reality is different. Once you become a band, you need a record label, a management, booking agents, merchandising and more. You cannot control it by yourself. So at one point, when you become a professional, DIY is gone. The idea is nice but… (shrugs)