When Steven Wilson finally walked out on to the stage, the cheer rose from the crowd like a tidal wave. 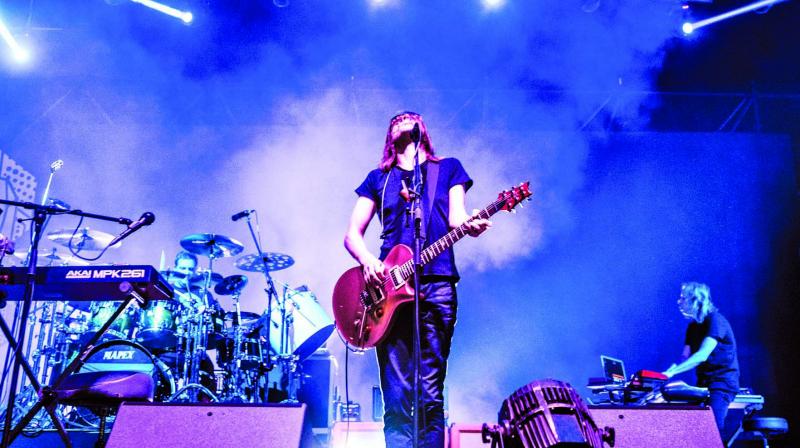 While the line-up at India’s “happiest music festival” has always been an impressive one, this year, there was one name on the line-up, which had people from all over the country teeming into the event—Steven Wilson.

Though known globally for his earlier collaborations with No Man, he garnered a massive fan following in India during his Porcupine Tree days and, the sheer number of youngsters wearing Steven Wilson tees on the second day of NH7 Weekender made it clear who most people had come to watch.

Despite that though, the run-up to the main event was quite impressive. Five massive stages spanned three sprawling lawns. Fans of the bands playing thronged the stage area, while others quenched their thirst at the bar with big steel mugs of zippy concoctions or simply lay back on the grass, letting the music wash over them. Each gig had its own charm and following, whether it was the rock and roll belting F16s who broke a guitar onstage that, of course, got the Twitterati buzzing, or the indie-folk tunes of singer, song-writer Jose Gonzales, whose mellow tones wove harmonies with those of his band mates. But as the Swedish singer wound up his set, the crowd in the main arena for Wilson, grew into well over a thousand.

When Steven Wilson finally walked out on to the stage, the cheer rose from the crowd like a tidal wave. After the last notes of his first number Hands. Cannot. Erase. had echoed through the lawn, Steven addressed the audience for the first time since stepping onstage, “I don’t really do happy music,” he said, referring to the festival’s tagline. “So I’m happy to spread some misery,” he added and the crowd went wild. After a heartfelt dedication to the late David Bowie and Leonard Cohen, the singer, who conforms to not one genre, begins plucking out the notes to the song perhaps everyone gathered there knew. And Lazarus rose like a chant from the masses.

The rest of the hour goes by much the same, with Wilson flitting from keyboard to guitar to bass with a maestro’s grace. He pleased the crowd with Porcupine Tree numbers like Dark Matter and Sound of Muzak but stuck to his own preferences as he closed with what he calls his best song—Raven.

While Day 2 was definitely overrun by Wilson fans, each band had its own fan following. For most of them, NH7 was old hat since they have already performed at a few Weekenders. Take Kolkata based Underground Authority for instance, which had the audience on its feet during the first day. The band was formed when !Band and Weapon Shop came together to form a single entity that would go on to win some of the biggest band competitions in the country.

When asked what it feels like to be at the festival, the band members are full of enthusiasm and nostalgia. “The festival is not just about music, it’s an experience. Everyone should experience it. The variety of music, the visuals, the connections, the entertainment and the entire feeling is simply majestic. Our first time playing at NH7 was in Kolkata last year and this time we have played in Shillong and Pune and every year its just keeps getting better and better. One of the plus points of the festival is the planning and coordination team. They really know how to take care of the band and get things going,” they praised.

The band, which first came to national attention when they joined India’s Got Talent, has a distinct communist ideology, which comes through in all their songs. “You should get what you deserve — this is everybody’s mantra, everyone’s notion, everyone’s wish. What does communism stand for but giving everyone in the community what they deserve?” they demand, when asked why they follow what is often called a redundant ideology. “We all are driven by communism everywhere. We have been following this ideology since we were very small, probably in our early teenage years and it does have a significant place in today’s world.

The idea of revolution itself has been blown out of proportion and somewhere it has turned into a utopian helium balloon, which is floating beyond our reach every single day. Revolution begins from the most common and simple places and one need not run around with a gun to prove a point. Standing up for yourself is the crux of Underground Authority and communism is one of the means of achieving this,” the band adds.

The second day of NH7 saw perhaps some of the most enthusiastic fans turning up, and though most of them came to watch the erstwhile Porcupine Tree vocalist, many were also ardent followers of Sky Harbor, a djent band based out of Delhi and Cleveland, Ohio in the States. For them, coming to the Weekender was like coming back home. “This was the stage where we made our live debut and it’s given us so much love. We always feel extra pumped up for this particular festival,” said Keshav Dhar, who had begun the band as a solo project, before musicians from around the world joined him to collaborate on his experiments with sound. The band has recently changed its lead vocalist from Daniel Tompkins to Eric Emery but Keshav seems more than pleased with the sound, and if the audience at the concert were anything to go by, so they did. “ He brings a completely new dimension to the sound of the band with his background and influences,” says Keshav.

Though Steven Wilson had raised the bar so high that nearly no one could have followed but the third day of the Weekender saw some performances, which definitely took the event to another level. Sitar maestro Anoushka Shankar was definitely one concert that no one wanted to miss and the neither was Kerala-based Thaikkuddam Bridge.

The band played some hard-hitting but melodious numbers, ending their set—and Weekender— with their famous Fish Rock. Though completely in Malayalam, the songs still had the crowd cheering along with the lyrics that spoke of the love of fish. “Govind Menon our founder, violinist and vocalist loves fish and hence comes the origin of Fish Rock. We are sure he meant it as a tribute for the scores of fish fry he has enjoyed. The lines are penned by Dhanya Suresh who writes all our Malayalam numbers,” the band shared later.