Sounds out of the box

Bengaluru based indie musician, GrapeGuitarBox is using their music to break down heteronormativity and bring about inclusion. 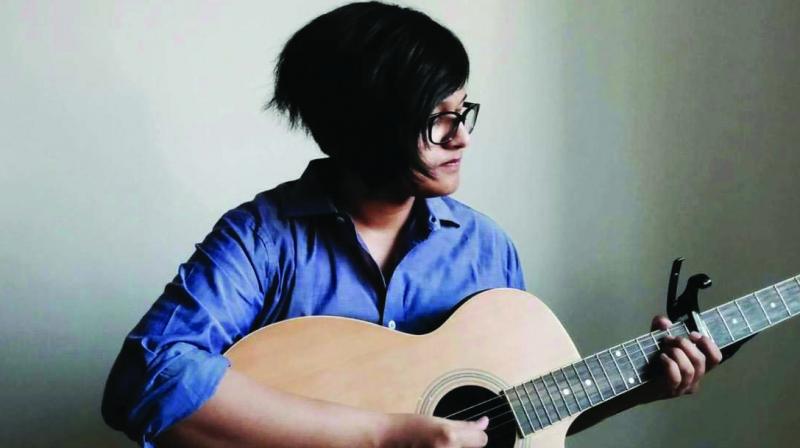 Teenasai Balamu might be just 24 years old but they are no stranger to musical fame and acclaim. This non-binary queer indie-pop musician has already been featured in 2011 Rolling Stone India’s list of upcoming indie artists to look out for and performed in several live shows. The musician, who goes by the stage name of GrapeGuitarBox, is known for their unique covers of popular songs on Youtube and Instagram, Balamu recently treaded into the world of original songwriting by releasing two singles off their debut EP Out.

Balamu wrote Out, a compilation of six tracks, over the course of the last three years. “The title is pretty self-explanatory. I wrote the songs when I was heavily closeted. The songs talk about different types of love, queerness, the uncertainty of death, etc,” explains Balamu. Teenasai’s idea to sing queer songs came from discovering Mary Lambert (a gay musician), who covered really popular songs but did not change the pronouns to make them sound heteronormative. “I really resonated with that because it was a way for me to make music that had a queer subject but didn’t compromise my sexual identity. So, I started making similar covers myself,” adds Teenasai.

Even though Teenasai does not hail from a musical family, music has been a part of their life for a long time. “I started posting music covers on Youtube in 2016. I wasn’t sure what I wanted to do with it, to be honest,” recalls the singer-songwriter. It would be a few years and multiple live shows later that Balamu decides to take the plunge as a professional musician. Teenasai who isn’t signed to any music label was helped by veteran producer Miti Adhikari and Santhos Nataraja of Third Eye studios in Bangalore in the production of the EP. “I had the opportunity to work with an array of wonderful and talented musicians with this EP,” gushes Balamu.

Talking about being out in the music industry, Balamu says, “As a queer person, it is important for me to be visible as it is a small price to pay for all those closeted people who can see me and realise that they are not alone and that it gets better.” They believe that society has been really bad at acknowledging the existence of queer people and some kind of awareness and representation are required to fix it.

Currently, Teenasai is working on the music video for their second single Wait For You and waiting to release the rest of the singles from the EP.