My music belongs to my forefathers, it’s not mine, says Pandit Sanju Sahai

Sanju Sahai is a 6th generation musician, now London based, and today the eldest son, so is the ‘khalifa’ (titular head) of his gharana. 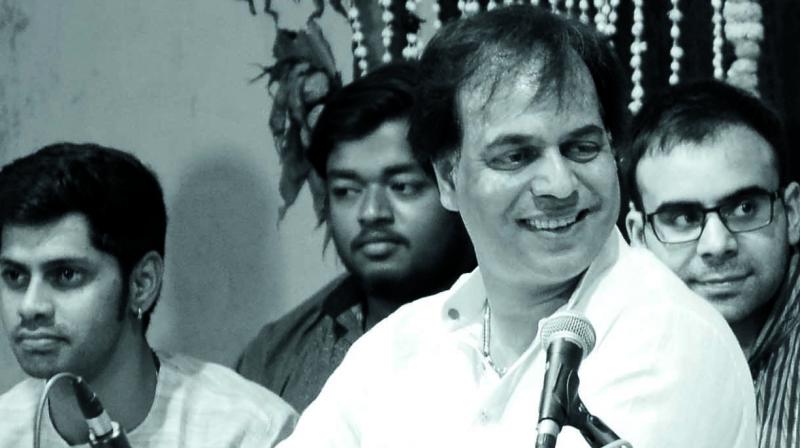 The craft of tabla was brought to Banaras around 200 years ago by Pandit Sanju Sahai’s forbear, Pandit Ram Sahai, from Lucknow. The Banaras gharana has seen such doyens as Pandit Kanthe Maharaj, Pandit Anokhe Lal, Pandit Samta Prasad, and Pandit Kishan Maharaj in the last century.

Sanju is a 6th generation musician, now London based, and today the eldest son, so is the “khalifa” (titular head) of his gharana. His tabla solo concerts are hugely acclaimed, as they reflect the playing of an earlier generation of what is now old fashioned Banaras “baaj”. He is startlingly handsome, affable, completely informal, and with the easy, natural charm of a born artist, in whose genes runs generations of trained performers.

It was easy to chat with him before his concert. I asked Pandit Sanju Sahai about his early life in Banaras, before he left for London. He acknowledged “of course I grew up in India listening to some of the greats of Hindustani classical music such as Ustad Bismillah Khan Saheb, Pandit Ravi Shankar Ji, Pandit Kishen Maharaj Ji, Pandit Samta Prasad Ji and of course my father and Guru Pandit Sharda Sahai Ji. We used to look forward to attending all night concerts especially; I used to always sit behind my father on the stage, and it was a heady feeling.”

Chatting about the Musical greats he had heard led to my asking him how he felt today being the Khalifa of his gharana; for him was it an advantage or a disadvantage  and he replied, “well, it’s a bit of both really. I am the eldest son, and from the time I was four I realised there were expectations of me that were not be centred around my cousin, who is elder and also a tabla player.

All us cousins grew up together in a musical environment in Banaras; one of my sisters used to play the tabla, Suman Mishra, two of my cousins also play tabla named Deepak Sahai and Shiv Sahai. For me, in my life time I don’t think I can even reach 10 per cent of what my forefathers achieved; I feel I am just keeping the tradition alive. My elders in the Banaras gharana who play the tabla get my respect anyway; if they choose to acknowledge I am my father’s elder son, and thus worthy of respect, well that also happens. It’s no big deal for me.”

I asked how it was that there are so many different aspects to the Banaras tabla “baaj” to which Pandit Sanju explained, “the Banaras gharana is so prolific because the founder, Pt Ram Sahai had five disciples and each one was taught differently. That’s why you see so many masters in our gharana who were each so different — Anokhe Lalji, Kanthe Maharajji, Samta Prasad ji….” Pandit Sanju continued, “tabla is so very important today because almost everybody has rhythm in them, even if it’s bad rhythm! Melody is not such an intrinsic part of one’s being, for everyone.

Tabla not only connects one to the melody, it’s complete in itself. More and more people are taking up djembe and cajon because it is considered a cool thing today, but at the end of the day, it’s basically about rhythm which is so intrinsic to our lives. Today the audience chooses who they pay to hear, they don’t only buy concert tickers based only on the main performer; the accompanist is as important. I was always taught from childhood onwards to perform with players who were good, masters of “sur” from whom I could learn. It’s important who you are friends with, it’s as important who you interact with musically. I am a bit choosy about who I play with for this reason.

Of course living in London I don’t have as many choices as I would have here, but in my way, I try. And I don’t mean this arrogantly; that I choose to only play with well known masters. That’s not so. There is this German guy who has taught himself the sitar by listening extensively to Ustad Vilayat Khan; he is very “sureela”, and I think it’s my duty to accompany someone like him, so I do.”

I asked him what he considered himself to be as a musician — a purist or an innovator? Pandit Sanju’s reply was unequivocal, “musically I am completely a traditionalist. My music belongs to my forefathers, it’s not mine, I am only keeping the music alive. I don’t make any changes in my tabla, or the baaj. There is so much already; I have not yet felt the need to play my own thing. I asked him about his concert tours, he said “I come to India around 3-4 times a year. I don’t want to play 10-15 concerts in a season; if I have 1 or 2 good concerts, I’m happy. At Saptak, Ahmedabad, I was given 45 minutes to play, but I ended up playing 2 hours! I feel a free flowing concert cannot stick to a strict time table; when creativity flows, you should not rein it in.”

Mr Sanju continued his reminiscences “Life is very busy for me in London; I have been teaching tabla at the University of London for years. After my father’s demise I am teaching more and more as well as running tabla residencies in different parts of the world, in Norway, Canada, USA. I sometimes get booked 2 years in advance. And I never let anyone down, if I have made a commitment, I stick to it. Whoever is entered in my diary first is the one I perform with! I am lucky to have played with all the greats — Ustad Amjad Ali Khan, Pandit Hari Prasad Chaurasia, Pandit Shiv Kumar Sharma, my solo tabla concerts are also very appreciated.”

Pandit Sanju then spoke of the new passion in his life, “through Kashi Arts, a new organisation I have founded, I am trying to take the amazing artists we have here in Kashi to the West; it’s a sad thing but our society is very brand oriented; what is heard about, or seen as being good is what is popular.

Classical music always has had, and should have, a select audience. It’s not for the masses. The interest in classical music is still there, and it’s is not like it’s there due to Western influence.” On this note, we parted; Pandit Sanju Sahai headed for his concert.