Effect of British rule destroyed our pride in our culture

An erudite scholar, prolific composer of music, Ragas as well as compositions, the maestro occupies a unique position in the world of music. 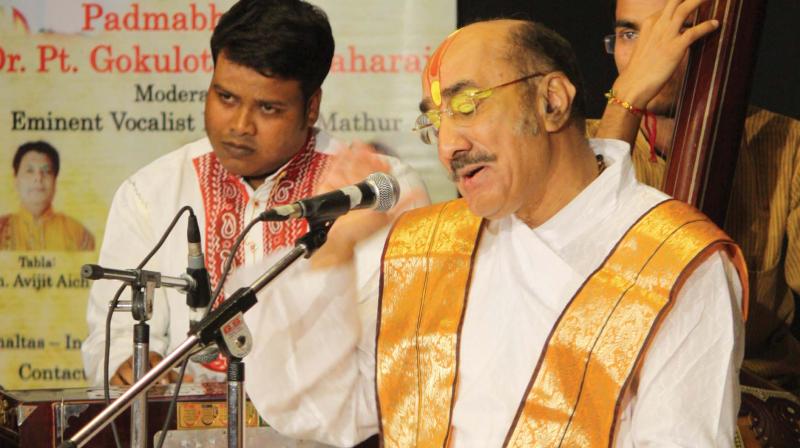 Pt Gokulotsav Maharaj is a rare priest musician. Steeped in the vocal temple tradition of dhrupad, termed “Haveli Sangeet” (Haveli refers to the house of the Lord) to which he belongs, his love of music propelled him to embrace the classical vocal idiom fully, and get trained in khayal gayaki too. He also trained in playing the rudra veena, pakhawaj, and is fully familiar with the Carnatic idiom, as “originally my family was from Andhra, from the family of Swami Vallabhacharya”. Clearly visible in his music is his subliminal inspiration by Ustad Amir Khan, whose very voice production he emulates, though apparently he never formally learnt from him. An erudite scholar, prolific composer of music, Ragas as well as compositions, the maestro occupies a unique position in the world of music.

In the capital recently to expound on Haveli Sangeet on which he is an undisputed authority, Pt Gokulotsav spoke on a variety of subjects.

Q. Please tell us about the origins of your musical tradition.
A.  Around 750 years ago my forebears moved to the North, to Raipur, Madhya Pradesh. We are descendants of the family of Shri Vallabhacharya, who was also a great musician himself, his sons Vithalnath ji and Shri Gosain ji had established the tradition of the “Ashtachaap kavi”. (The 8 priest musicians who composed a variety of compositions dedicated to Lord Krishna, used in temple ritual even today) Mian Tansen himself, and Nayak Dhondu in the Gwalior court too were disciples of this tradition, as was Raja Man Singh of Gwalior; mine is the 18th generation in that tradition.

“Swar mayi sewa thi Bhagwan ki, samay samay ke pad, ritu ke anusaar Raga, Bhagwan ka naivedya, saakar swaroop Vallabh sampradaya Haveli mein tha” (the offering to the Lord through music, the lyrics appropriate to the season and the time of the day, in the suitable Raga, accompanied the Lord’s meals; all these aspects were present only in the temples of the Vallabhacharya tradition). Infact the totality of the offering, covering every element, even to what clothes the Lord was to be adorned by, in what colors – all this is present in the Vallabhacharya tradition.

In our temples, in the Vallabhacharya “Sampradaya” (tradition), the Lord is traditionally awakened (the mangala) by the veena not the voice; the voice comes later. Again in the afternoon, to lull him again to sleep, and finally at night again the veena used to be played. In India we have had a variety of veenas; I have been trained in playing veena, too, but there is a tradition that the rudra veena with its two “tumbas”  is an instrument of “sanyasis” (celibates) only, so I was advised by elders to stop playing the veena so I could be a family man. In the South, the traditional Saraswati veena has only one “tumba”, and it is not associated with celibacy. “Maine veena bajaya, kyunki voh sewa ka ang tha, kalakaar banne ke liye nahin” (I learnt how to play the veena as it was a means of service in the Lord’s ritual prayer). I also trained in percussion instruments – pakhawaj mridangam and duff.  I have also played the rabab.

Q. Where were you born? Who else did you learn from?
A. I was born in Indore. I also learnt pakhawaj from Pt Chunni Lal and Pt Shiv Narayan; I have practiced upto 6 hours on the pakhawaj; my training in “laya” was quite extensive, and I am considered knowledge in rare taals like “Chandrataal” in 19 beats, “jag jhampa” taal in 11 beats, amongst others. I have played concerts on the pakhawaj too!

The maternal side of my family too were scholars and musicians, from Vrindavan. My father was a Sanskrit scholar, homeopath plus ayurvedic doctor, in addition to being a great musician. All my siblings have been brought up respecting music, have learnt music; they are all great listeners, though they may not have practiced the way I did.

Q. Tell us more about this tradition of Haveli Sangeet.
A. Music has been a part of temple ritual for centuries. Kabir, Rahim, Meera’s compositions have been set to music, and sang over the ages, the lyrics laud the Lord. “Swar Ishwar kee upasana hai”. (music is a way of worshipping the Lord). There are at least 250-300 compositions that are commonly sung today, from this tradition; there is no way it can be said to be an isolated genre of music. Music was first an offering to the Lord, it went to the courts of rulers much later.

Just as an example, Bade Ghulam Ali Khan used to sing a “sadra” in Raga Megh, from the Haveli sangeet tradition; another in Raga Multani was “sab din hotan ek samman”, a composition of Surdas.

Ustad Faiyaz Khan who lived years in Baroda used to sing “Vande nand kumara”; he must have heard it at the Mehtapur Goverdhan nath temple. “Seekhe ho” the famous vilambit khayal in Raga Kedara is from the Haveli sangeet tradition; as is “Sughar chatur baiyan”. The Gaekwad of Baroda was a disciple in our tradition, as was the great Pt Omkarnath Thakur. Practically every great vocalist sings Haveli sangeet compositions - including Pt Jasraj of course, Ustad Alladiya Khan, Ustad Amir Khan, Pt Ramkrishna Bua, the Senior Dagars, the Malliks of Darbhanga to name just a few.

Q. With such a rich tradition, why are we culturally so bereft today?
A. The effect of the British Rule in India destroyed our pride in our culture. Only English speaking and Western culture was considered refined. A few generations in a way forgot their roots, and so the transmission of culture got arrested.

Q. You have created many Ragas. Tell us more about this.
A. I have always used the rules in creating Ragas. A Raga is not just a tune or dhun. Just like our food is no longer pure, our music too is no longer pure. One needs proper training before one can venture into creation of a Raga. My Raga Adbhut Ranj-ini is a combination of Hindol Abhogi and Ranjini. I myself have forgotten how many Ragas I made, a lot of them are derived from the Carnatic pantheon.

Rendering Ragas in purity cannot happen, unless one knows enough. For example, one needs to know both Raga Gaud and Raga Sarang before one can correctly render Raga Gaud Sarang. Nowadays, students of mus-ic want to perform too fast so do not bother with correct extensive learning. Certain Ragas have been made to die out because their effect was destructive, malevolent. Like Raga Deepak. Ragas like Puriya Marwa Todi are also not benign, but not really destructive; their use too I feel should be limited.

Rules of posture also apply – the veena should be played sitting in “vajra-asana”, even singing should be in “hanumat asana”, as the kundalini shakti gets activated. Our world of music is truly an ocean!

Q. So you feel extensive knowledge is a prerequisite in the world of music?
A. Well, if you want to comment on a subject, you must know all aspects of it. So called critics of music have such limited knowledge; they do not even know the differences in the same Raga in different gharanas; how can they comment on someone’s concert? It’s like there are different types of rotis – made of “atta”, “besan”, “makki” (wheat flour, gram flour and corn flour) – if you have tasted only one, you will naturally think the other is strange, and comment accordingly!

On this light note, we parted ways; one was left in awe of the vast range of knowledge of this multi dimensional master.